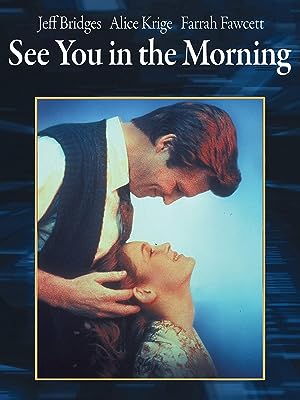 See You In The Morning

(162)
5.81 h 58 min1989PG-13
From the tangles and confusions divorce and remarriage can cause and from a wonderful ensemble of actors, Pakula creates a moving celebration of love and family the second time around.

Johnny PastaReviewed in the United States on February 25, 2012
5.0 out of 5 stars
Is There Anything That Jeff Bridges Can't Do?
Verified purchase
Is there anything that Jeff Bridges can't do? He is such a diverse actor it isn't even funny. And this was one of his classic examples of what he can do. Good story line of two separate families with their own classic issues to deal with. Jeff sort of jumps out of the kettle and into the frying pan in this one and is torn between his first marriage/wife who is played by the late Farrah Fawcett and his second marriage/wife who is played by the beautiful English actress Alice Krige. He has a lot of baggage he has to sort out if his second marriage is going to be successful or not. But this movie is definitely worth the watch and maybe even a 2nd time too. I feel there are really no dull moments in it. Great supporting cast and very well written as far as diologue is concerned. If I could give this movie 6 stars I certainly would. I highly recommend this movie to anyone.
15 people found this helpful

from the terraceReviewed in the United States on May 14, 2021
2.0 out of 5 stars
All dressed up with no where to go...
Verified purchase
Nothing original here and too sugary. It's all been done before. Would have liked to see more of Farrah who has a great stage presence and persona. Perhaps she should have had played the leading actress in this dull film. Dialogue was predictable and unrealistic. Kept waiting for something to happen but nothing really did. Great backdrop of NYC but the movie went no where. I think even Jeff Bridges was bored with the script. Oh, I didn't like this movie. Would not recommend and sorry I actually paid for it.

Laurel-Rain SnowReviewed in the United States on June 8, 2009
4.0 out of 5 stars
The Forces that Connect and Separate...
Verified purchase
I thought about this movie, [[ASIN:6301572793 See You in the Morning [VHS]]], one night while watching something about Farrah Fawcett on TV. Typically, a flash of the film crosses my memory - and then I Google to find out which movie it was - followed by the old click of the Amazon pages.

And voila! I had this old flick - from way back when - with another favorite star, Jeff Bridges. There was no DVD version, but I decided to take a chance on the VHS.

As I watched the movie over again, I was reminded of why I enjoyed it so much back when. Now it isn't one of those truly amazing flicks...but it is a "feel-good" tale of families - families that come together and then are torn apart - and the forces that connect and separate them.

Newly widowed and newly divorced individuals, portrayed by Alice Krige and Jeff Bridges, chart their course through their budding relationship, which leads to marriage too quickly - you see the red flags going up all over the place! - but they are lonely. And they love each other. Their blended families bring a host of problems, the least of which is a shoplifting teen daughter and a son who runs away when he learns that his mother and new stepfather have put the home on the market. This is his father's house! He protests and creates trouble, but eventually everything is sorted out.

Farrah Fawcett plays a beautiful, seductive ex-wife who makes a play for her ex-husband (Jeff Bridges' character) during her mother's final illness - when everyone is gathered together for a mournful goodbye.

Will the characters finally solve their issues, or will the past eventually eclipse the newly developing connections?

The movie was a little choppy in places, going back and forth too abruptly at times...but all in all, the images conveyed the angst of families in crisis and in flux. Four stars.

Darryl MillerReviewed in the United States on October 22, 2019
5.0 out of 5 stars
Heartfelt story
Verified purchase
When is a house more than a house? When it contains a family's memories.
One person found this helpful

BookchildReviewed in the United States on October 14, 2016
5.0 out of 5 stars
Life In the Morning
Verified purchase
A favorite and I was delighted to be able to purchase it on DVD, it was not available for a long time. I cannot give a specific reason, I just like this film, It is charming and characters are real, and the adults act ;like adults and there is honesty and make it a pleasant film. If you get to see it , you will want it in your collection.
2 people found this helpful

girliegurl16Reviewed in the United States on March 6, 2015
5.0 out of 5 stars
Director Alan Pakula ~ one of his best!
Verified purchase
I ordered this DVD after viewing this movie on television. If you love happy, romantic, family, interesting and sad all at the same time then this is definitely a movie for you. I've watched it over and over, probably 100 times or more. It's my own personal copy and shared with no one! The cast is super and the dialogue is quick and snappy, also slow and easy at times...no bad language...and Alan Pakula is at his directorial best in developing this story line. He pulls you into this story quickly and keeps you there, interested throughout...no boring parts just plain healthy entertainment.
2 people found this helpful

GeorgeReviewed in the United States on March 13, 2015
5.0 out of 5 stars
You can't go home again
Verified purchase
Divorce and rediscovery. Rebuilding your life once again. Introspective film of new allrgiances and letting go of the past. Jeff Bridges, Farrah-Fawcett, Alice Krige, MacCauley Culkin, Linda Lavin, David Dukes and Theodore Bikel excel. Psychiatrist meets a pianist's widow. Moves well and
is both touching and very real. One of the best of it's kind ever made.
2 people found this helpful

Amazon CustomerReviewed in the United States on September 29, 2020
5.0 out of 5 stars
Nice to find this movie again.
Verified purchase
Ok so I do love this movie. But...aren't kids supposed to grow in three years? I think they forgot that little detail as far as reality goes.
See all reviews
Back to top
Get to Know Us
Make Money with Us
Amazon Payment Products
Let Us Help You
EnglishChoose a language for shopping. United StatesChoose a country/region for shopping.
© 1996-2021, Amazon.com, Inc. or its affiliates