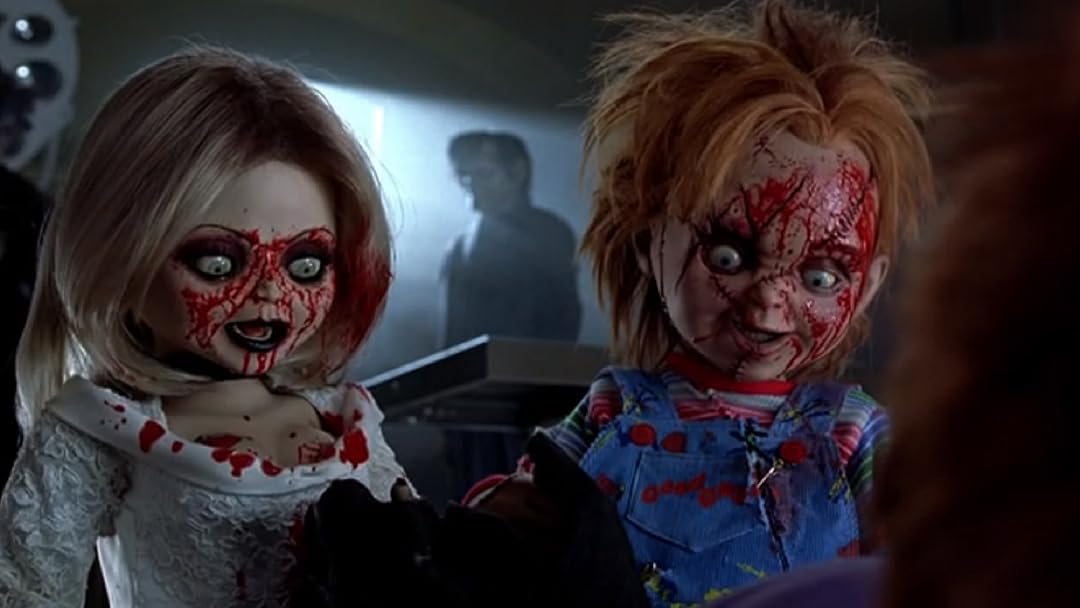 joel wingReviewed in the United States on November 10, 2020
3.0 out of 5 stars
2nd Chucky film where they make fun of the franchise
Verified purchase
By the time of Seed of Chucky the franchise was no longer taking itself seriously. It was going for the laughs. It threw in all kinds of bits making fun of itself as a result. For instance there was a Chucky and Tiffany film being made full of cursing. Jennifer Tilly appeared as herself and was trying to get into a film being made by Redman playing himself about the Virgin Mary of all things. There’s more goofiness and of course some murders along the way.

The Chucky series had gone as about as far as it could trying to be a serious horror series. This turn towards comedy, which started with Bridge of Chucky and continued with Seed of Chucky while maintaining some of the slasher elements of the original was a nice turn of events. It doesn’t seem like it would work, but it does. Tilly especially shines as the fading movie star.

Kitten ClawzReviewed in the United States on July 25, 2020
1.0 out of 5 stars
Awful to the point of satire
Verified purchase
This went so off the rails for me. I cannot in all good conscience recommend. It's horrifying...ly bad. I have enjoyed the Chucky series until this installment. I would highly recommend just skipping this literal monstrosity and forgetting it exists altogether.
2 people found this helpful

GinaReviewed in the United States on October 10, 2020
5.0 out of 5 stars
Hahahahahaha go Chucky and Tiffany
Verified purchase
Meg Tilly is my hero. She hasn’t aged a f*%#ing day in 20 years. This move is campy and hilarious, with (believe it or not) a sweet family story line with conflict and struggle. Not just blood. But there is lots of blood too.
I am told Bride of Chucky was not as good; didn’t see it myself but I know the story.
One person found this helpful

Amy LynnReviewed in the United States on February 2, 2006
3.0 out of 5 stars
Chucky and Tiffany's Androgynous Child
Verified purchase
Continuing from Bride of Chucky... Tiffany has given birth to a strange looking razor tooth baby named Sh*thead. The seed is kidnapped by a british ventriloquist and forced to compete in ventriloquism contests in England. Sh*thead looks like a dead ringer for David Bowie in his Ziggy Stardust days. He has a kind soul and is nothing like his parents.

As each day passes hes wondering where his parents are and dreaming of meeting them. Soon enough he manages to escape and ends up in America. He makes it to the set of the movie where Tiffany and Chucky are filming a movie. He reads the voodoo chant words on his necklace and manages to bring his parents back to life.

Chucky and Tiffany cant tell what their child is so they take off his pants to reveal a barbie-like crotch. Tiffany wants a girl so she names her Glenda and Chucky wants a boy so he names him Glen. If you ask me id say its more like a boy. But Tiffany and Chucky continue to argue over it throughout the movie. To the suprise of Glen/Glenda his parents are killers , they try to do whats best for Glen/Glenda but its hard to stop killing, especially for Chucky. Papa Chucky wants to turn his son into a killer but Tiffany wants to stop the killing for her son/daughters best interest.

Overall, its a strange funny film more than scary. The movies in the series just get more weird by the years. I wonder what they'll think of next.

What's up doc?Reviewed in the United States on May 25, 2019
1.0 out of 5 stars
Should've stopped at the first
Verified purchase
It's no secret that Chucky's Child's Play is a classic. Therefore I've come to exact a certain level of quality, creativity, Acting satisfaction. This did not produce any of that. Chucky is the sociopathic doll we enjoy watching. He is far from it in this money grabbing film. Worse then 2019.
2 people found this helpful

ElyzaJoyReviewed in the United States on July 14, 2019
4.0 out of 5 stars
A classic movie to watxh with the kids.
Verified purchase
My son loves this movie it's a favorite of the kids ! I watched it as a kid and now my kids watch it so its a good movie to watch wen I wana watxh a horror film but the kids dont want to be too scared.
One person found this helpful

J AlexReviewed in the United States on August 20, 2020
3.0 out of 5 stars
Worth a watch if you're bored
Verified purchase
I mean.....weird weird demon spawn of Chucky. The movie isnt really scary either. If you want to laugh and are a Childs Play fan, it's worth a watch.

Amazon CustomerReviewed in the United States on November 15, 2021
5.0 out of 5 stars
Still funny
Verified purchase
My teen wanted to watch this movie because of the new movie out. They enjoyed the movie. It’s not scary, but it wasn’t when it came out.
See all reviews
Back to top
Get to Know Us
Make Money with Us
Amazon Payment Products
Let Us Help You
EnglishChoose a language for shopping. United StatesChoose a country/region for shopping.
© 1996-2021, Amazon.com, Inc. or its affiliates