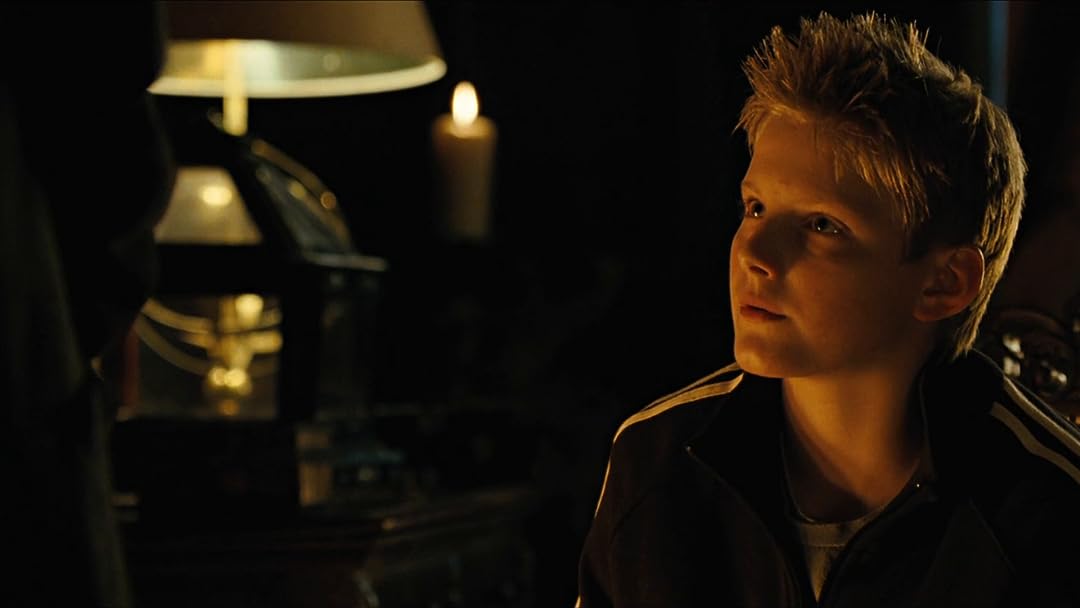 The Seeker: The Dark is Rising

(923)
4.71 h 38 min2007X-RayPG
HD. A teenage boy discovers his destiny lies in leading the forces of Light against an evil uprising in this adaptation of the novel.

johnfReviewed in the United States on April 1, 2017
4.0 out of 5 stars
Kids to 13 will like it. 4-stars for kids, 3-stars for adults.
Verified purchase
This is a tricky review to write. Note the wide discrepancy between numerous one-star and five-star reviews. I feel that though the film is very flawed for different reasons, that it will work for its intended audience of kids 13 and under. For adults, it's a different story. If I could do it here I'd give it 3-stars for adults and the 4-star rating is just for kids. The film makes it because it looks good and is well shot despite a tendency to indulge in odd camera angles, especially from above. The special effects are decent for a film that has a middling budget for a fantasy. The film, especially in the first third is quite good in creating an atmosphere of ominous suspense. What went wrong falls into two very separate categories.

After the success of The Lord of the Rings and Harry Potter, fantasy was the thing as studios tried to find a new series to franchise and make billions. British author Susan Cooper wrote a five book series (of which the second book was titled The Dark Is Rising, which came to be the title of the whole series) in the 1970's. It carefully and expertly wove Arthurian legend and Celtic mythology and along the way won the Newberry and many other awards. I read the whole series around 1980 and enjoyed it. It was relatively big for a fantasy series but not in the league of LOTR or Potter, and was much better known in Britain than America. When it was announced, fans were happy. When it came out, fans were angey, even Susan Cooper was angry. The film is absolutely despised around the Internet by fans of the books. This is not the usual "The book was better..." but rather that virtually everything was changed. By the time the film makers were done the only things they had in common were the subtitle and a few character names. Not only that, but the main character, Will Stanton and his family were changed from English to American, which was probably for box office reasons despite protests to the contrary. All this outrage is justifiable if you are a fan of the books.

But most people haven't read the books, so that shouldn't matter if you can allow it to stand by itself as if it wasn't based on a book series. However it falls down here, too, especially by adults who will notice its shortcomings more than kids. The problems are so numerous that I'll only mention a couple of the main ones. Mostly it's the script. Good actors were hired for most of the parts, especially those playing "The Old Ones" but they do virtually nothing but stand around occasionally adding story exposition, background and explanation when necessary to move the plot along. And for these powerful beings they supposedly are, they literally stand around and do nothing most of the time. The second big problem lies in the quest itself. Will Stanton is "The Seeker" by birth and must find five powerful "Signs" to defeat the Dark. But he just stumbles and bumbles into them: it seems wherever he goes he just happens to find a hidden gateway to another time and once there, just happens to see the Sign and grabs it. And this happens five times! It makes little sense and gets boring quickly; better to have had him find one Sign and make it more challenging.

Christopher Eccleston is rather miscast as "The Rider" the emissary of All Evil Itself or perhaps its personification. They would have done better with a faceless hooded character like the Nazgul. As it was, he seemed more like a highwayman than the Dark Lord. Not so for Alexander Ludwig who really carries the film as much as he can with a limiting script. He seems properly perplexed as a schoolboy suddenly thrust on a quest he neither asked or is prepared for, and has the energy to be the center of the film even if the script does him no favors. He went on to play Cato in the first Hunger Games film and now is Bjorn Lothbrok in The Vikings cable series.

It's hard to imagine that the studio thought they could make a franchise out of this film. Oddly, the production company was the one which had made the Narnia series but hired a director who said he didn't like children's fantasies. in the end they made just another generic fantasy, and a confusing one at that.

Robert MaxtonReviewed in the United States on May 29, 2019
1.0 out of 5 stars
Tore out the heart of the books and replaced it with bland cliches
Verified purchase
Absolutely awful. Will Stanton is now a boring Hollywood standard protagonist who has no idea what he's doing and refuses the call; Merriman doesn't act even one tiny bit the wise, friendly, takes-kids-seriously mentor he is in the books; the Lady doesn't even show up once, and Will's fateful error in the Great Hall of the Light gets moved to the end of the story where it makes no sense where he'd be that dumb. The entire subplot with the Walker and the Book of Grammarye is gone, too. They didn't even get the sign right, replacing it with some bad pop-"physics" about fractals. Even the prophecy -- both prophecies, the famous "When the Dark comes rising" verses -- got cut!

Worst of all, though, the movie doesn't even stand on its own. Even if I were to pretend it had nothing to do with the Dark is Rising series from the start, it's *still* a terrible movie. Again, Will is a bland cliche protagonist; the other Old Ones that are allegedly timeless powerful figures (they even claim to be able to outmatch the Dark Rider at the beginning) manage to be threatened by a bunch of snakes; the Tom subplot has no payoff, an unfired Chekov's Gun, and opens a big plot hole at the end (shouldn't he be feral?)...

I honestly can't think of a single thing to praise in that movie. It's that bad. Don't buy it, don't watch it, don't recommend it. Just read the books.
6 people found this helpful

MrsAReviewed in the United States on February 15, 2019
1.0 out of 5 stars
Don’t waste your time.
Verified purchase
Loved the books, bored by the movie. This is a great example of how film makers can destroy a storyline fast by not straying too far from the book. Did they even read it?
Seems like they tried too hard in the special effects department. Deeply disappointed. They took a great story and turned it into run of the mill mush.

The characters were altered, the storyline was altered. I see why it took twelve years to come to my attention. Glad I didn’t go all out and buy it before watching. It’s a waste of time.
6 people found this helpful

James ArnoldReviewed in the United States on August 20, 2020
3.0 out of 5 stars
Mangled one of my favorite books...
Verified purchase
As someone else said in their review, this is a difficult review to write.
For children of the modern generation, who have never seen, read, or even heard of the books, it will probably be entertaining. Three and a half stars for that demographic.

For those of us who grew up with these stories, this is a loathsome adaptation. Other than some locations and some character names, it has no loyalty - nor pays any homage - to the source material. Almost as if the script writers and production team read a fourth grader's C+ book report, rather than the book itself. In lieu of loyalty to the source material, it is filled with tropes and stereotypes from every fantasy/supernatural suspense story targeted at children.

As far as adapting books into movies, this movie is a prime example of what NOT to do.

From a technical standpoint, rather than the story, it's moderately well cast. The actors did the best the best they could with an abysmal script. One and a half stars for the adult group...

If you have kids, this may be a mediocre addition to your movie collection. If you're an adult wanting to buy it for yourself for nostalgic reasons, save your money, and rewatch Harry Potter...
2 people found this helpful

A. A. ManesReviewed in the United States on June 3, 2021
3.0 out of 5 stars
Meh, not a fan
Verified purchase
After reading the books "Over Sea, Under Stone" and "The Dark is Rising," I thought I would give this movie a try. The books are a bit dark and scary. The movie seemed disjointed, only loosely similar to the book, and had some scary parts. If you're thinking of having kids watch it, be wary if they are afraid of skeletons, snakes, drowning, bad guys coming in the house, guys that should be good who are actually bad (like police men). I don't think I'll have my own kids watch it, and I don't plan on ever watching it again. I'd rather watch the Lion, Witch, and the Wardrobe or something, where the Light side is a bit brighter and the plot line is more clear.

TRReviewed in the United States on April 26, 2020
1.0 out of 5 stars
Very disappointing
Verified purchase
The Dark is Rising is one of my favorite series. Shame on me thinking the movie would even resemble the book. Couldn't make it past 15 minutes- it wasn't even funny-bad. I never do this for movies but would like a refund if this is even possible.
2 people found this helpful

Catssmor2013Reviewed in the United States on May 16, 2020
4.0 out of 5 stars
Available to purchase
Verified purchase
I already have this movie, however it is in storage. So when I saw it was available to buy I did. This movie is so entertaining, on the edge of your seat, wondering what is next and will the seeker win over evil. I think a wonderful family movie.

EmilyReviewed in the United States on January 13, 2022
5.0 out of 5 stars
Product good, movie okay
Verified purchase
5 star because I’m rating the product which came in great condition and works. The movie was just okay
See all reviews
Back to top
Get to Know Us
Make Money with Us
Amazon Payment Products
Let Us Help You
EnglishChoose a language for shopping. United StatesChoose a country/region for shopping.
© 1996-2022, Amazon.com, Inc. or its affiliates