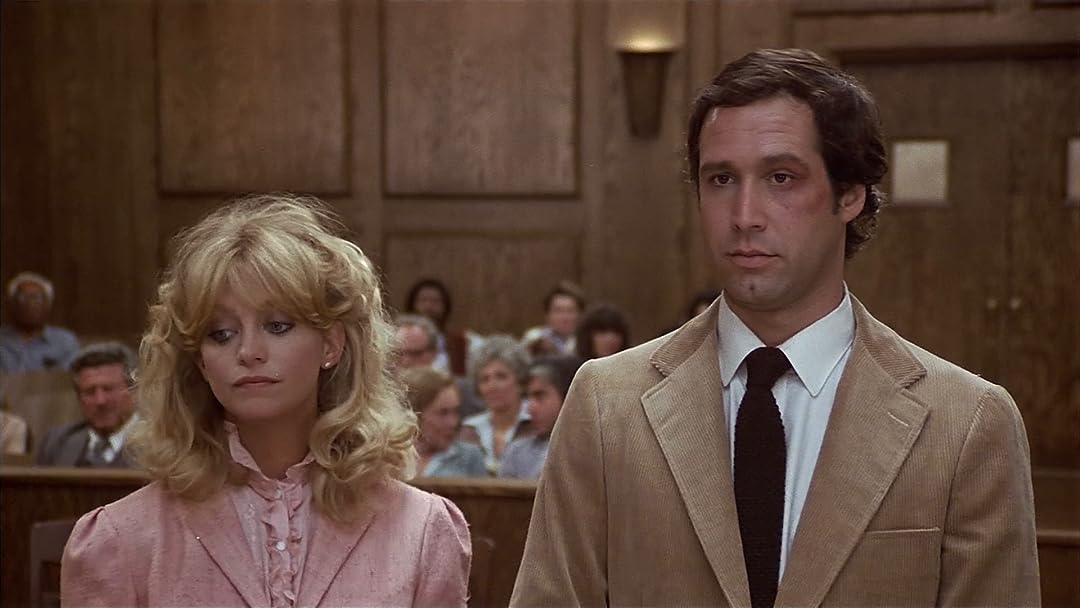 K DudeReviewed in the United States on March 22, 2018
5.0 out of 5 stars
Great classic!
Verified purchase
Love this film! I was maybe only six or seven years old when I saw this playing on television. It would air once in awhile and I was always fixated on it every single time. I finally bought this movie on DVD nearly 30 years after it's original release. The film STILL holds up. In fact, now that I'm older I get the nuances much more than I did as a child I'm sure. It's just entertaining and it's Goldie Hawn and Chevy Chase primarily that make this picture rock. It's a fun escape of comical antics. The premise may sound super unrealistic and silly, but they make it believable. This is one of my favorite classics now.
17 people found this helpful
Report abuse

Jonathanfan77Reviewed in the United States on June 24, 2018
5.0 out of 5 stars
You will laugh until you cry.
Verified purchase
A straight shooting., by the book D A, and his attorney wife who has a soft spot for criminals and illegal aliens set the tone for this hysterical, laugh out loud comedy. Throw in an ex husband who is framed for bank robber and well...this is where the adventure begins.
Nicholas Gardenia, (Chevy Chase) is the ex of Glenda Parks, (Glody Hawn) and current wife of Ira Parks, (Charles Grodin) The D A.
Kidnapped and framed for bank robber, Nick seeks the help of the one person he knows will not let him down. HIs ex wife.
He shows up at a party hosted by Ira, who is in the running for A G of the state. Being a sucker for hard luck cases, Glenda agrees to help Nick.
The problem is keeping him away from Ira. The insanity escalates from there, as Nick has a bad habit of appearing at the wrong moments.
From hiding under the bed, to taking Glenda hostage, and anything in between, The insanity culminates with Nick serving dinner to the Governor.
That is one of the best scenes in the movie. Grab a big bowl of popcorn and settle in for the laugh fest.
One of Neil Somon’s best comedies.

🌴Palm trees 🌴Reviewed in the United States on January 5, 2020
5.0 out of 5 stars
Barrell full of laughs..
Verified purchase
I have a anxiety disorder... and when I need laughter, I put this dvd in
It’s hilarious . Every part so interesting..
I can watch this over and over..
I had this dvd once. And it just gave up.
So I finally found it here,
I have depression to,and this movie is great for depression.
It’s g rated for most part, I think.
Golidie hawn and Chevy chase at there best performances
Enjoy if you buy it. Give it 5 stars. I wish I can add a extra ⭐️ star, Dvd great price, works great, came on time.
2 people found this helpful
Report abuse

Mark LaFranceReviewed in the United States on July 10, 2021
5.0 out of 5 stars
Better than getting your feet scraped. As AURORA would say!
Verified purchase
Totally Hilarious Film!
I remember seeing this once at the local theater and later on at the drive-in the following year. Crazy funny Movie in my opinion! And at the time it was great to see Hawn and Chase together again after Foul Play. Charles Grodin is hilarious as Goldie's Husband. If you want a laugh on a gloomy day, this Neil Simon comedy classic will do the job.
This dvd is replacing my dvd+R recorded version off TCM from 20 years ago.
Picture quality and sound are excellent. Excellent price....what's not to like! Buy it....laugh a little!
👍👍👍👍👍
✌♥️🙂
Report abuse

OrrymainReviewed in the United States on May 14, 2020
4.0 out of 5 stars
Funny movie
Verified purchase
The movie itself is lots of fun. Chevy Chase and Goldie Hawn were a hoot in this flick. I saw it multiple times in the theater and have watched it on TV here and there, but it's hard to find these days, so I sought out the DVD. No extras really. It's supposed to be widescreen, but mine played full screen, which was fine with me. If that matters to you, make sure it works as you want. For a couple of hours of good entertainment, though, this movie is worth it in my opinion.
One person found this helpful
Report abuse

Tinkerb714Reviewed in the United States on March 6, 2020
5.0 out of 5 stars
A wonderful and hilarious movie!
Verified purchase
I love this movie! I can watch this movie time and time again without ever getting tired of it. The entire cast is wonderful! Even though Chevy Chase and Goldie Hawn are a great comedic team, my favorite character is Yvonne Wilder who plays Goldie Hawn and Charles Grodin’s sassy housekeeper Aurora. If you appreciate a great classic comedy that will keep you laughing this movie is a wonderful addition to any movie lover’s collection.
One person found this helpful
Report abuse

A HermitReviewed in the United States on March 23, 2011
5.0 out of 5 stars
Never a dull moment
Verified purchase
Neil Simon's 1980 comedy starring Chevy Chase, Goldie Hawn, Robert Guillame, and Charles Grodin is a very, very funny movie, from start to finish. Nick Gardenia (Chase), is a divorced novelist who is living a simple, quiet life. He just wants to work on his book. But things start to go bad right away, as he is visited by two low-life crooks who want to use him as a decoy of sorts. Under the threat of death, or at least, serious bodily harm, he is forced to rob a bank, and as they all make their getaway, he is thrown from the car and left by the side of the road to fend for himself, as he is the one caught on the bank's surveillence camera. He is now a fugitive with all of the state's police force searching for him.

Desperate, he shows up at the home of his ex-wife, Glenda Parks (Hawn), a defense attorney, and his only hope. She is a very kind-hearted woman with a beautiful soul and a soft spot for the downtrodden, maybe she'll help? The problem is, her current husband, Ira Parks (Charles Grodin), is about to be appointed Attorney General, and if he finds Nick hiding in his house, he'll turn him in to the police, probably after a quick roughing up. And if anyone finds him there, Ira could easily lose all chances at his beloved Attorney General position, because his wife is harboring a fugitive. So Glenda has to hide Nick from Ira and everyone else as she tries to convince him to turn himself in, all the while they are about to throw an elegant dinner party celebrating Ira's good fortune, and Glenda has to play dumb, as if all is well.

As the plot unfolds, we see that Glenda still has some strong feelings for Nick, and she is very conflicted; ethically, she must defend Nick in court, but personally she must turn off her long dormant feelings for him. And Ira can't find out she has been harboring him. And the situation becomes more and more complex as a second dinner party approaches; The governor himself is invited this time, and Nick, through a series of strange twists, winds up helping to serve the food and drinks at this particular dinner party.

This film has large doses of physical and verbal humor throughout, chiefly Chase's pratfalls, per his days from "Saturday Night Live" (he was an original cast member in 1975), and Hawn's character's gradual breakdown from the stress of hiding her ex-husband from her current husband; Goldie Hawn is a very good comic actress, and in this particular story, she's brilliant.

It's an excellent screenplay, well-executed direction, and brilliant comedy throughout.

One caviat, if you expect a lot of extra features, or any features, for that matter, you'll be disappointed; there aren't any. But this is such a good movie, that shouldn't matter.

I have watched this movie many times since 1980, and laugh out loud every time.

Amazon CustomerReviewed in the United States on December 22, 2018
5.0 out of 5 stars
Goldie and Chevy team up again in a winning comedy!
Verified purchase
Chevy plays a writer who gets kidnapped and forced to rob a bank. Goldie is his ex-wife, an attorney who handles mostly underprivileged young offenders, usually by hiring them for odd jobs, married to the soon-to-be DA of California. Chevy seeks her help while hiding from the law, her husband, their servants and the governor in their spare room over the garage. Very funny!
2 people found this helpful
Report abuse
See all reviews
Back to top
Get to Know Us
Make Money with Us
Amazon Payment Products
Let Us Help You
EnglishChoose a language for shopping. United StatesChoose a country/region for shopping.
© 1996-2021, Amazon.com, Inc. or its affiliates