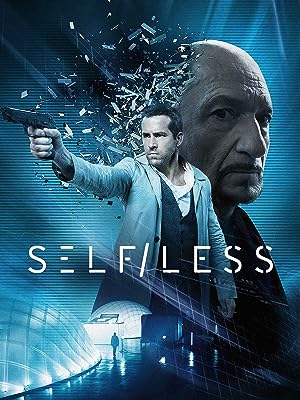 (1,582)6.51 h 57 min2015X-RayPG-13
A billionaire (Ben Kingsley) undergoes a procedure that transfers his consciousness into young man's body (Ryan Reynolds) and uncovers a conspiracy with the body's origin.

ReviewReviewed in the United States on January 25, 2019
2.0 out of 5 stars
Deserves No Better Than Two Stars
Verified purchase
Damian Hale (Ben Kingsley) is a Billionaire NY real estate tycoon who chooses to undergo a procedure to transfer his consciousness from his stage four cancer stricken body into the body of an artificially healthy body, only to discover afterward that his consciousness has been transferred into the body of someone who was a husband, a father, and a former special forces soldier. Now identifying himself as Edward Kidner (Ryan Reynolds) he sets out to correct a wrong. Hale had been promised a body in a blank state but he was lied to. Writers Alex and David Pastor should have known better, and Ben Kingsley fails in his portrayal of Damian Hale first of all because a NY billionaire real estate tycoon who "built New York" is highly unlikely to care much about the moral complications of gaining a lease on a new life at the expense of another. Hale seeks to make amends with his daughter whom he has neglected most of his life only when he faces the very final stage of his existence, by bringing her a check. How fitting ! If he was so demonstrably devoid of caring and understanding, if he was such a shallow human being, then it makes no sense that as Edward Kidner he would seek to find the wife and young daughter of the much younger man whose body he occupies out of concern or even out of curiosity. Upon transference Damian Hale would far more likely seek to suppress or completely erase any conscious remnants of the person whose healthy body he now occupies to embark on an ambitious plan to lie, cheat, and collude his way to become US president. It is Reynolds who saves this film from the bottom of the garbage heap. Due to the giant holes in the plot, Self/Less deserves no better than two stars. The film could have been saved and made much more sense if Damian Hale had started out in his life-extension quest as a world renowned surgeon, artist, or even an athlete megastar, but a real estate tycoon?
11 people found this helpful

JessieReviewed in the United States on December 21, 2018
5.0 out of 5 stars
Good movie
Verified purchase
I personally love this movie. There's something about it that makes me happy. It's got a great story line with great actors and a good ending. As a writer, I appreciate endings that are happy because sacrifices were made, so this movie ending definitely fills my cold, dead writer heart with joy. Personally, anyways. I recommend giving this movie a try.
5 people found this helpful

Blake DawsonReviewed in the United States on November 14, 2015
4.0 out of 5 stars
If you like Ryan Reynolds or something new...
Verified purchase
Self/less is most likely a film you either like or hate. Note that I did not say "Love". I like Ryan Reynolds as an actor. Sure he's not a Daniel Day Lewis with easy access to as many oscars as he desires... No, but Ryan can play the funny guy when called upon or the badass/serious person when needed. The latter was chosen for this film and it works well for Ryan. Its not really a spoiler, as it is revealed early, but Kingsley's character doesn't have much screen time. As the trailer suggest, Kingsley's character's mind is transported into the body of Ryan Reynolds's character. Ryan does a great job conveying that we are still dealing with Kingsley even though he is no where near the screen. I believed that Kingsley was really inside going along for the ride. That's good acting folks!

The story is new... I dare someone to find something similar. But it could be improved upon in areas. However, overall, this film is somewhat compelling from the beginning to the end. I did feel a little bit like "really?" at the end. Not saying that it was bad... But I'll let you decide. Definitely check this out if you want to see something different. The visuals and sound of Self/less is very enticing and energetic.

WilfReviewed in the United States on August 27, 2019
2.0 out of 5 stars
Had Potential But Loses Momentum and Drags On
Verified purchase
Ben Kingsley is one of my favorite actors. Both he and Reynolds do a great job, but it's the plot and pace that needed a lot of work and it really does fall short. IMO not worthy of the higher scores others have given it. I only fast forward through movies with whom I'm losing interest or rather can't keep it. I kept wanting it to end - just for some kind of resolution. I don't know whether I'm happy for the way it ended or just happy the damn thing is over. LOL
2 people found this helpful

JoshReviewed in the United States on February 25, 2019
4.0 out of 5 stars
worth a watch (may contain spoilers)
Verified purchase
Points I needed to put down:
-Ryan Reynolds really makes this movie work. Which is nice to see considering his usually more comedic roles.
-The action sequences are fairly well done
-Intrigue is there
-The heroine is fairly realistic (she does a good job portraying a seriously confused widow(half-widow?))
-The guy with the flamethrower really needs to learn how to use it better
-The heroine makes an over the top stupid decision to flag down a car...seriously what was she thinking?
-Damien Hale at the beginning is shown to be ruthless and overall as having a low EQ yet he somehow grows a conscience in his new body and drops his whole life over a single hallucination
-There are plenty of theoretically more ethical ways to gather usable bodies - like the brain-dead that a scientist amoral or not would probably have at least considered first (if only to save on cost).
-The end was really well done, all things considered, everything is mostly tied up

EJ’s MommyReviewed in the United States on November 23, 2015
5.0 out of 5 stars
Great storyline that kept the pickiest viewers engaged
Verified purchase
This movie was one of the best that I've seen this year (2015).

I watched this movie with no expectations as my family and I often enjoy a lot of movies in our home theater. After a while, you tend to run out of the extremely good stuff & buy movies to stay current & hope for the best.

Well, I can say that this was truly an egaging movie. It had a lot of surprise twist & turns, but nothing that went so far over your head that you were left sitting there going, "what just happened"? The movie was a lot of fun to watch. Also, even though it didn't get the media attention that some movies get, I'll remind you that the movies that get all of the press, more often than not, leave you feeling rather "unimpressed".

This movie was easy to watch. It's not a kids movie but there was no nudity & very mild profanity, if any. Instead, the movie focused on and stayed true to the storyline without veering off too far to mon essential sub plots.

I'm not a professional movie critic. I'm just a regular person who appreciates a good flick that's worth my full price dollar. It's refreshing to say that is movie fits the bill. I dont lnow abpit you, but I get tired of paying $22-$25 dollars for blu rays that are overhyped just so that Hollywood can overpay it's favorite actors.

"Ain't nobody got time for that"!

Kimberly WardReviewed in the United States on January 5, 2017
3.0 out of 5 stars
Not bad, Not fantastic either.
Verified purchase
This was entertaining, beautifully shot, interesting. I think all stories where a guy essentially switches bodies become about the one actor who embodies most of the movie, and Ryan Reynolds is very likable. However, it would have been good to have a bit more of Ben Kingsly's character to like before he disappeared, in order to believe he was the one who did the good deeds.
7 people found this helpful

RomanoReviewed in the United States on June 5, 2021
5.0 out of 5 stars
Ryan Reynolds Awesome
Verified purchase
Selfless is an excellent movie and Ryan Reynolds couldn't do any better than he did in this movie. This movie is almost like a 21 century Frankenstein with a twist. My buddies and I enjoyed it very much, however, the ladies were disappointed because Ryan Reynolds keeps his clothes on in this movie, although you get to see his chest.
See all reviews
Back to top
Get to Know Us
Make Money with Us
Amazon Payment Products
Let Us Help You
EnglishChoose a language for shopping. United StatesChoose a country/region for shopping.
© 1996-2021, Amazon.com, Inc. or its affiliates