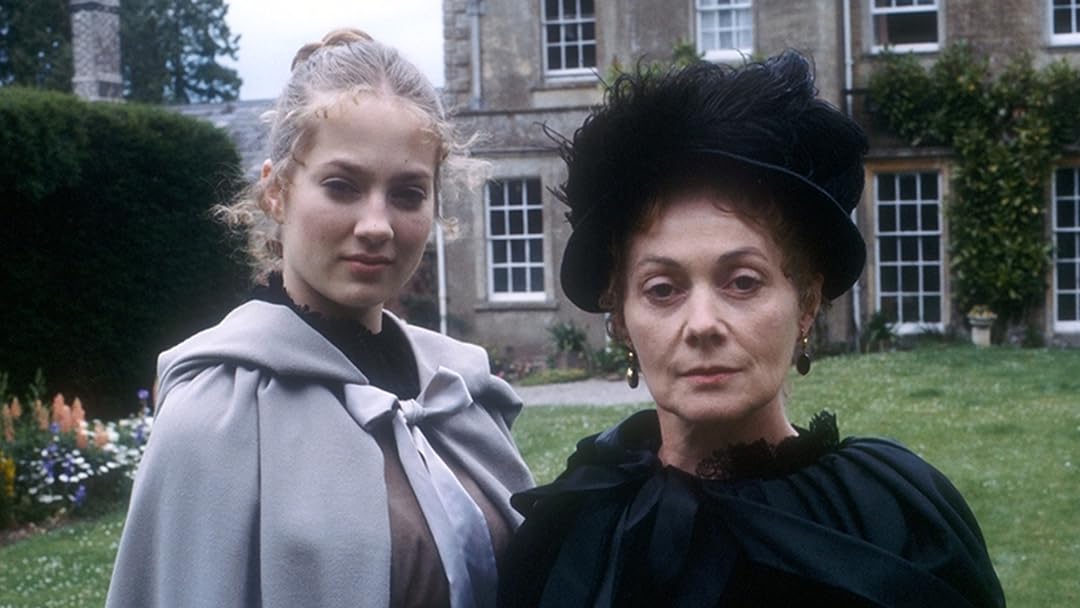 Season 1
(643)1981TV-PG
Jane Austen's tale of two devoted sisters with totally differing attitudes to life and love. Filmed on location in the stately homes of picturesque Dorset and Somerset.

PJH PowellReviewed in the United States on September 27, 2015
5.0 out of 5 stars
UPDATE: problem reported in 2015 now corrected. Stream version matches original broadcast
Verified purchase
Review Readers: I wrote this review back in 2015. Amazon now offers the complete 3-part version to stream for Prime Members. So, my earlier comments which follow do not fit the Prime streaming version you can get today. I tried to purchase it, but couldn't. Amazon allows you to stream it with Prime, but not to purchase it in any form other than as a DVD. So, I am stuck owning the two-episode, cut down version. I am glad Amazon corrected the problem. It's great to watch this wonderful version the way it was originally broadcast. Now I don't have to rely on my DVD.
2015 review:
My Austen lovers beware! This streaming version is DIFFERENT from the broadcast and DVD versions--it has been reduced to Just Two Episodes. First of all, I absolutely LOVE this 2008 version of Sense and Sensibility and own two DVD sets. I have watched it multiple times and adore the music, the setting and all of the performances. Please know before you buy this instant video version that it has been chopped up so that it will fit into two episodes. The original version which aired on BBC and PBS and which you can own on DVD has three episodes. Wonderful dialogue from Mrs. Jennings has been cut in several areas, for example, and other moments are gone that give this version flow and balance. If you enjoyed this on TV or DVD you will notice it immediately. I suggest you buy the DVD version. I am very disappointed that Amazon would offer this without advising that it has been shortened and changed. And it's a shame that whoever owns the rights to this production would allow it to happen. If they had not altered it, I would have given it five stars. As it is, I gave it two simply because I did not have the heart to put only one star next to one of my favorite tele-versions of this story. If you have never seen it before, please buy the DVD version, so you can enjoy it in the way it deserves.

Shelly E. NiemeyerReviewed in the United States on June 20, 2018
5.0 out of 5 stars
Very well done
Verified purchase
First, I heart Jane Austen. I have seen Emma Thompson's version of this and I love it, too. This one is truer to the book. Hattie Morahan as Elinor is calm, reserved and plays the responsible older sister perfectly. Charity Wakefield is spot on with her girlish portrayal of the silly Marianne Dashwood. Dan Stevens never fails to please...sorry what was I saying. There is no more despicable character in all of Jane Austen to me than, Fanny Dashwood (not even Willoughby), Claire Skinner will make you dislike her even more, brilliantly done. And Mark Gatiss, who plays Mr. Dashwood makes you believe he would do just as he is told. By his wife. At all times. So is there anything I don't like? No. The costumes are wonderful, the scenery of the seaside is breathtaking and the sets look as only I can assume homes would in that period. There is great attention to detail down to the hairstyles. I loved every minute of it.
14 people found this helpful

Baird-GreeneReviewed in the United States on July 7, 2020
4.0 out of 5 stars
Interesting Adaptation Made for British TV in 1980.
Verified purchase
Having several versions of "Sense & Sensibility," I really wanted to add this adaptation to my collection. It was made for television on a lower budget than a Hollywood production. The opening scene is a bit cheesy. Yet, I was quickly drawn in by the story and the acting. The characters are very stoic and stilted in their mannerisms and speech. I believe in Jane Austen's time, this may have been more the norm than in our modern day when restraint of any kind is frowned upon. The episodes are short --- only twenty-five minutes each. The main relationship focused on is between Marianne and Willoughby. Elinor and Edward Ferrars' romance is almost neglected. Margaret, the youngest sister, is left out entirely.
4 people found this helpful

AnonymousReviewed in the United States on May 13, 2021
1.0 out of 5 stars
The Version Available for Purchase is Cut Down to Only 2 Episodes
Verified purchase
I thought that I was purchasing the version that had been available on prime until recently. Even though I didn't pay much for it, I feel cheated. If Amazon sells a chopped up version of "Sense and Sensibility", they should be clear that it is not the full version. I ordered it via a Fire Stick. It was not clear that it had been cut down. I will be less trusting in future. FWIW, if you can get the 3 episode version, it is a wonderful show.
3 people found this helpful

ann0314Reviewed in the United States on February 17, 2016
5.0 out of 5 stars
Bought the Digital Download without seeing the original Airing and thoroughly enjoyed it!
Verified purchase
I quite enjoyed this version (and I did purchase the digital download) That said, I never saw the original "aired" version to know "what was missing" but for me regardless of whether parts were missing from the original airing, it wasn't noticeable to the story and I thoroughly enjoyed watching the film. (Though obviously if you don't "need" to steam this then possibly buying the DVD version that is complete with no "cuts" would be ideal - In my case I wanted to have it for my Kindle for long trips so)

Comparatively to the "Emma Thompson" version, I would consider this to be a more thorough reflection of the original story as where the "Emma Thompson" version was a shorter more to the point version. I found this to be equally well done and in some ways better since you get a better feel for the characters having more time to "get to know" them. If you have the extra time and want to see a very wonderful, thoughtful, and more detailed version of this story, I would highly recommend this.

Shelby MichaelsReviewed in the United States on September 11, 2018
2.0 out of 5 stars
Good Quality DVD but Bad Adaptation
Verified purchase
The DVD works well, so no issues there, but ouch this production is god awful. Sense and Sensibility is my fave Jane Austen book but this adaptation is strident, stilted and unbearable to watch. Sometimes the BBC goes too far with wooden, shrill characterizations of Vidtorian/Regency England society to the nth degree.

Instead, I highly recommend the adaption with a stellar cast including Emma Thompson, Kate Winslet, Hugh Grant, and the wonderful now unfortunately deceased Alan Wickman, Tom Wilkinson, and Gemma Jones. It is my personal favorite adaptation. It is charming, brings the characters and time period vividly to life, and is infused with the wry humor that is a central feature of Jane Austen's literary style.

I also recommend its precursor, the 2008 BBC TV MIniseries adaptation you can buy on DVD also with a wonderful cast including Hattie Morahan, who, in my mind, is the absolute personification of Elinor Dasheood. When I think of Elinor, I think of her. It also stars Janet McTeer and David Morrissey as Colonel Brandon.
One person found this helpful

AJBReviewed in the United States on May 8, 2016
5.0 out of 5 stars
Excellent version!
Verified purchase
This is the 2008 version of S&S, which I love. I see no need to compare this with the brilliant version directed by Ang Lee and written by and starring Emma Thompson. It's perfectly fine to enjoy both! They each provide different nuances and choose to focus on different moments or approach them in equally valid ways. But..I have to say that I adore Alan Rickman as Colonel Brandon--I love him and only can see him in the role, way over the actor in this version, who was too sour and off-putting for my taste. Otherwise, this is a stellar version with an amazing ensemble cast, equally as good I feel as the Ang Lee film. I have seen both the original version of Morissey's 2008 S&S, as well as the slightly shorter version and enjoyed both. I am not attached to the scenes that were shortened as I can't stand Lucy Steele's character, no matter who plays her! ;-)

Several reviewers I believe are incorrectly describing this as the 1981 version, which it is not. I have no idea how the two could possibly be confused! The 1981 version has the horrible, blurry video quality you'd expect from 1981 (see the picture of the old version). This 2008 miniseries is exquisitely filmed, sharp and high resolution with modern, gorgeous cinematography, what to speak of the acting, etc.
19 people found this helpful

Stephanie RReviewed in the United States on March 2, 2018
5.0 out of 5 stars
This is BETTER than any other version I have seen of S&S
Verified purchase
I am a long proclaimed Jane Austen fan. So I am very picky about how well I like the film adaptions of her books. Between this adaption of S & S and the one with Emma Thompson and Kate Winslet; I find that this adaption of S & S much better, moving at a slower pace. At first I was REALLY iffy about this Col Brandon due to my love of Alan Rickman as Col. Brandon. This man did pretty well I will say but I will always prefer Alan's Col. However that is where my preference of the movie over the BBC mini series ends. Charity does a beautiful job of bringing Marianne to life. Hattie is a PERECT Elinor, and Dan Stevens is far, far better as Edward than Hugh Grant was. His facial expressions alone trump Grant's whole character. I also love Janet McTeer as Mrs. Dashwood; she is tall, stately, beautiful and still young looking for having beautiful girls. I would definitely recommend this version over the other one. But then I have always enjoyed the longer arcs of Austen's books. I feel the same about P&P with Jennifer Ehle and Colin Firth. I am probably one of the only people that I know of that absolutely HATED the Kiera Knightly version of P & P. They spoke too fast, too low for me to follow.
5 people found this helpful
See all reviews
Back to top
Get to Know Us
Make Money with Us
Amazon Payment Products
Let Us Help You
EnglishChoose a language for shopping. United StatesChoose a country/region for shopping.
© 1996-2021, Amazon.com, Inc. or its affiliates