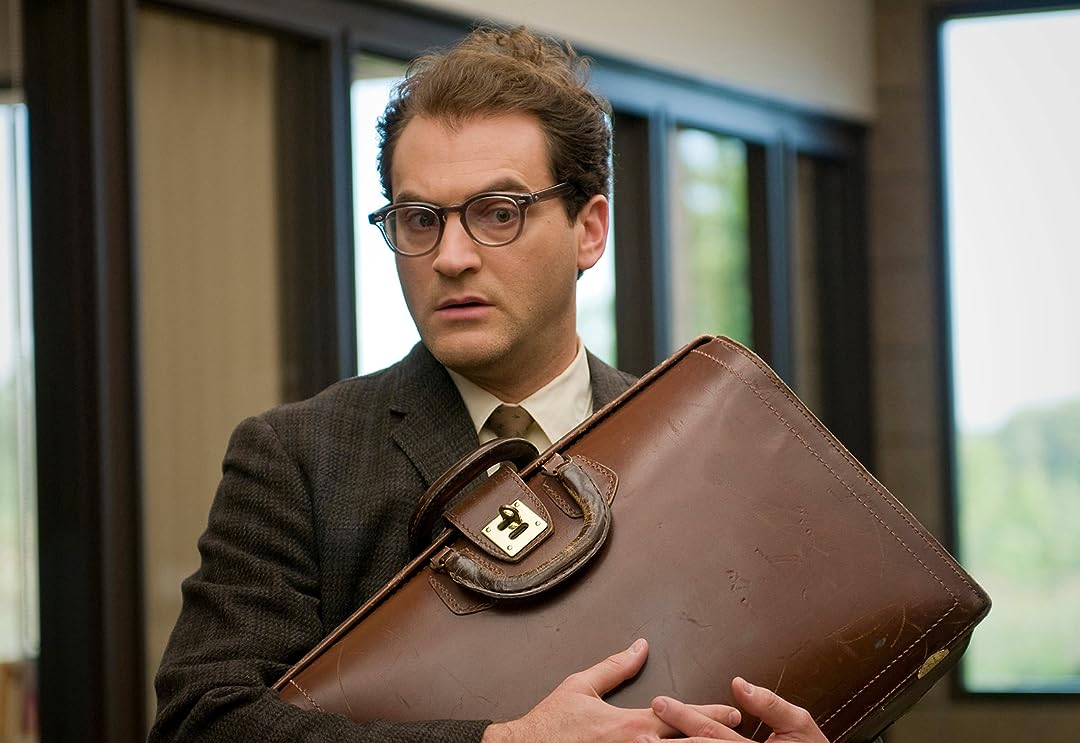 (953)7.11 h 46 min2009X-RayR
Academy Award winning directors Joel and Ethan Coen return to their comedy roots with this darkly humorous story about one ordinary man's quest to become a serious man.

Vladimir VinokurovReviewed in the United States on November 21, 2017
5.0 out of 5 stars
Finely executed, if somewhat niche, spiritual entertainment.
Verified purchase
In one phrase, this film essentially (and also masterfully and gently - yes, gently, despite all that presumed drama on the screen) tells the viewer that all things in life are connected, but nothing really is what it may seem on the surface.
Beware, this is not a comedy, if only somewhat of a comedy Cohen style - at least I can't title it as such. If I define "Burn After Reading" as a dark comedy and social satire, this is rather a philosophical drama sprinkled with (very) dark humor, more of a spiritually charged glimpse at everyday people's reality, and I suspect that as such it may not appeal to a lot of people. Still, fans of Cohen's filmography and people who are interested in spiritual development may greatly enjoy it... I did, very much so.
18 people found this helpful

Diana L. BarahonaReviewed in the United States on November 14, 2019
5.0 out of 5 stars
One of my all-time favorite films: witty and profound
Verified purchase
This is one of my favorite films. It is about how God inflicts trials on humans in order that they will stop clinging to the world trying to find happiness in work, family, church and community. Set in 1967, it is about a good, pious man who, like Job, loses everything at once. Witty, wonderful casting and direction, a sublime sense of timing and pace. The period and the community are not at all self-conscious.
8 people found this helpful

Smiley McGrouchpantsReviewed in the United States on August 5, 2021
5.0 out of 5 stars
So many particulars, it's almost impossible to not keep paying attention!
Verified purchase
His head's yanked one way, then he has to look back the other.

One thinks of that old line about Fiction, versus real life: "Fiction has to make sense. Real life doesn't ... " You get the feeling, like with "Juno," that they just wanted to cram a LOT in this picture!

And you can't help thinking of Pynchon's "V." when the dentist scene shows up, of Eigenvalue, Schoenmaker, and the Jewishness that hangs over those characters.

"He kept looking for messages, but found none."

"We can't know everything."

And the transistor radio shows up -- a precursor to "Doubt" (order of operations ... ?). The voice of God.

"No Jews were harmed in the making of this motion picture."

Linda ElaineReviewed in the United States on March 4, 2021
5.0 out of 5 stars
You Don't Have To Be Jewish To Love This Movie (But It Helps)!
Verified purchase
I thoroughly enjoyed A Serious Man-from the beginning to the end. In the opening scene, I realized that when I was a little girl I had an Aunt Pessi in Brooklyn (we lived in the Bronx) and she was from my mother's Romanian side. My dad always referred to her as "Aunt Pesserie." One of the funniest moments of the film (to my way of thinking) comes during the closing credits when it is stated, "No Jews were harmed in the making of this motion picture."
No harm done, just plenty of belly laughs. Thank you, Coen Brothers--you did a terrific job!
One person found this helpful

SeanOReviewed in the United States on January 16, 2018
5.0 out of 5 stars
A Coen Bros. masterpiece
Verified purchase
I can't stop watching this film and I can't say why. The dialogue and acting are stellar, almost every delivery of every line is somehow funny. It is about one man's search for meaning. The directors say it is a film about "Jews on the Plains." If you are Jewish you may enjoy this film even more than I did as I suspect it is full of humor meant especially for a Jewish audience.
9 people found this helpful

ProfessorReviewed in the United States on January 23, 2014
5.0 out of 5 stars
This is what movies should be
Verified purchase
The Variety movie critic wrote, "This is the kind of picture you get to make after you've won an Oscar." He is so right. The Coen brothers won four Oscars for No Country for Old Men in 2007. That gave them the artistic liberty to go another route and make a very intelligent, personal movie in 2009, A Serious Man.

No, this isn't a violent, over-the-top blockbuster like No Country. It's a quiet but engaging film that explore man's relationship with God--from a Jewish perspective. And it's insanely funny!

You don't have to be a Jew to appreciate this film. The theme is universal. It's a 1960's version of the book of Job. It's lugubrious throughout. It's black humor, for sure, but it's guaranteed to make you laugh.

The ending is a knockout. Some people didn't like the ending because of its ambiguity. I thought it was perfect.

Films like this are so rare, it's a miracle that the Hollywood moguls allow them to be made. But four Oscars bought the Coen brothers the freedom to do something profound.

Lochlan LongstriderReviewed in the United States on November 17, 2020
5.0 out of 5 stars
Raises questions that you have to answer for yourself
Verified purchase
There's a quote that I love: "God is a kid with an ant farm". Why do bad things happen to good people and conversely, why do good things happen to bad people? If you've ever asked yourself these questions then this movie is for you. Modernizes the Book of Job with plenty of Coen Brother's signature dark humor. Maybe the Gnostics had it right, the material world is ruled by the false god. You just have to look on the bright side of life. Yeah, right. Where's my slice of pie in the sky?
One person found this helpful

CAAZ2NYReviewed in the United States on June 15, 2018
5.0 out of 5 stars
Great stuff, retro style
Verified purchase
Outstanding. Highly underrated Cohen bros. Film. Granted it was Oscar nominated but it’s not going to make the avg fan’s top 3 CB flicks. High level Jewish humor that was sometimes too difficult for the Jewish characters to understand. Growing up a Yankees fan in NY the F-Troop mentions were not only nostalgic but funny. Rain delays provided many F-Troop reruns. The dry humor in CB films are unmatched. I may own this one someday to go along with The Big Lebowski on my shelf.
7 people found this helpful
See all reviews
Back to top
Get to Know Us
Make Money with Us
Amazon Payment Products
Let Us Help You
EnglishChoose a language for shopping. United StatesChoose a country/region for shopping.
© 1996-2021, Amazon.com, Inc. or its affiliates