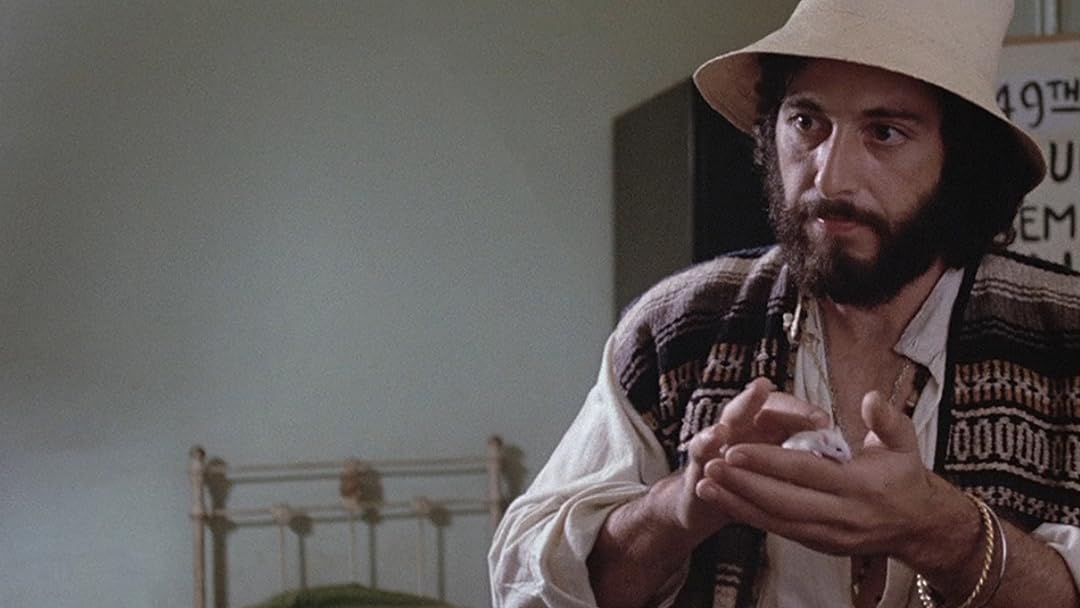 (2,897)
7.72 h 10 min1973X-RayR
The true story about an honest New York cop who blew the whistle on rampant corruption in the force only to have his comrades turn against him.

RoseReviewed in the United States on August 23, 2022
5.0 out of 5 stars
"The Whole System is Corrupt"--Frank Serpico
Verified purchase
Wow...this old movie is definitely worth watching if you have never seen it, and it is based on a true story. A true story about the corruption in the NYPD against the integrity of one man, with some excellent lines interspersed, like the one in my heading, but Frank also says these gems:

-"We [the NYPD] don't wash our dirty laundry, it just gets dirtier".
-"I DON'T SEE HOW THE DIVISION CAN INVESTIGATE ITSELF".

The sentence about the incompatibility of the police policing itself really resonated with me. I am a born and raised New Yorker myself, like Frank, and would love it if it were true that things have really changed, but I don't think so. In cases of police brutality, we still have the Civilian Complaint Review Board, which ultimately just passes along any enforcement measures to none other than police commissioner, who still retains the ultimate say-so over disciplining his own policeman.

So, yeah, the division is policing itself. Still.

Of course, corruption doesn't end at the NYPD level. They are just the heavies, usually just the bully operatives that hate doing paperwork. Oh no... the tentacles extend much further into the lawyers, judges, courts, etc--all systematically designed to eliminate any players with integrity.

And, if you do have integrity, as Frank Serpico did (worse if combined with actual intelligence as was the case with Frank) and somehow manage to make it into the NYPD Academy without them screening you OUT for it, then you will be isolated and bullied within it, as Serpico's suffering shows.

The following is what is usually left after all the screening out and ostracism of people with integrity in our nominal justice system:

DEPRAVED INCOMPETENTS PLAYING LITTLE EGO GAMES WITH EACH OTHER.

LoriSoxReviewed in the United States on September 7, 2022
4.0 out of 5 stars
Sad true story
Verified purchase
This is a good movie because of Al Pacino and the fact that it's based on fact. However, it's not GREAT because the rest of the cast is mediocre at best and it's unbelievably slow. The story could have been told in 45 minutes. It either should have been a lot shorter, or had a lot more action.

JamesReviewed in the United States on August 12, 2022
5.0 out of 5 stars
Relevant Today
Verified purchase
As I watched this excellent movie about rampant corruption within the NY police department it kept reminding me of what we are currently going through with the FBI. Serpico was hated by his fellow police officers because he would not participate in their corruption. They very worst in human nature on display.
4 people found this helpful

joel wingReviewed in the United States on July 31, 2020
5.0 out of 5 stars
Big cities like NY are corrupt & racist to the core & no one cares
Verified purchase
The Godfather, Dog Day Afternoon and Serpico will always be remembered as some of Al Pacino’s greatest performances. Serpico was based upon a true story of policeman Frank Serpico who exposed corruption within the New York City police department. It took a huge amount of determination to do this job because he went up against the entire department who were either in on the graft or wanted to protect their fellow policemen over doing what was right. The story highlighted how the whole city of New York was crooked.

Right from the start Serpico found out how the department operated. His partner didn’t want to take a call because he was napping. Another partner told him a shop owner gave cops free sandwiches and in return they didn’t give him tickets. One time he arrested two kids wanted for rape and the detectives took all the credit. Another time Serpico was chasing a suspect when a patrol car pulled up and opened fire with no warning and almost killed him. The cops were also given quotas for arrests which meant numbers were more important than who they actually arrested. One detective told Serpico that they only went after the blacks and Latinos and left the Mafia alone because they paid so well. Unspoken was the racism this implied because the Italians were white. Finally, he received a payoff for just being a cop. This was the event that started his dilemma. More importantly no one appears interested in what’s going on all the way up to the mayor’s office. The system simply perpetuated itself.

Obviously Serpico survived his experience, hence the book about him and then the movie. The message however was that big cities like New York are corrupt to the core and that continues because people accept it. They aren’t interested in policing and stopping crime. They’re racist as well going after people of color. While the massive bribery may not be as widespread as the 1970s when the Serpico story took place those other problems still exist today.
C
10 people found this helpful

Danielle MarinoReviewed in the United States on July 29, 2022
5.0 out of 5 stars
Great team
Verified purchase
Sidney Lumet and Al Pacino were such a great pairing of director and star.
I love seeing NY city in the seventies and the movies made there, particularly the police dramas,

Eric S. KimReviewed in the United States on March 14, 2010
5.0 out of 5 stars
Success after The Godfather
Verified purchase
Ever heard of Al Pacino? Well, I'm sure you have. Ever seen Scarface, The Insider, Heat? Or how about Dog Day Afternoon, The Panic in Needle Park, or Scent of a Woman? Yeah, he's been in numerous movies ever since the early 70's, and I'm sure you recognize at least his face. But in case you haven't noticed, Al Pacino is undoubtedly one of the greatest actors of 20th-century cinema. In fact, he's one of my favorite actors of all time, and there's a very good reason for it: this guy can really act. He's been parodied several times on film and on TV, but that's because everyone knows how good he is. From The Godfather trilogy to Insomnia, his performances are MORE then just solid gold. A professional method actor, he simply becomes his characters, whether they are fictional (Ricky Roma) or real-life (Lowell Bergman). He's not Al Pacino in The Godfather trilogy, he's Michael Corleone in the Godfather trilogy. He's not himself in Dick Tracy, he's "Big Boy" Caprice. No matter how you look at it, this guy is a living legend among actors. However, if Glengarry Glen Ross or Carlito's Way doesn't impress you enough, then maybe Serpico will.

When The Godfather was released back in 1972, it made Pacino, who was unknown at the time, a movie star. Studio executives already saw him as a "profitable" performer, but it looked like Pacino was concentrating more on cinematic material rather than money, because his next movie didn't look and feel like a typical Hollywood-style film. Serpico is based on the real-life story of Frank Serpico, a cop who refused to adapt to the corruption that took place in the NYPD. The film was made back in the early 70's, and the budget looks pretty modest from the looks of it, but that's beside the point. What really matters is how mesmerizing this movie is. This is a carefully-directed tour de force that showcases not only Pacino's spectacular acting talents, but also gives us an incredibly solid character study of the man who would become famous in police departments everywhere. Here is an individual who is honest and is fully dedicated to his work, but who is also tormented by the fact that the people he is working with are secretly breaking laws. This would result in him fighting against corruption, with some severe sacrifices along the way. I must say that Pacino plays the part perfectly, of course. The appearance, the mannerisms, and the ANGER of Frank Serpico are shown with real strength and heart. This is one of his greatest roles.

Aside from the fact that this movie showcases young Pacino at his best, the movie is photographed beautifully and written extraordinarily well. Director Sydney Lumet breaks away from over-the-top action and suspense and delivers with a slow and steady pace, which I think is really appropriate for this kind of film. The supporting cast (Barbara Eda-Young as Laurie, Tony Roberts as Blair, John Randolph as Sidney Green) is all-around excellent. The music by Mikis Theodorakis is a pleasure to listen to (except during one specific sequence, in which the music sounds as cheesy as the theme for a 70's cop show).

After my first viewing of Serpico, I instantly fell in love with it. It has quickly become one of my favorite films of all time. I think that the movie is going to get better and better after repeated viewings. In conclusion, this is a great movie, and if you're a fan of Pacino, then you have to see this film. Too bad, though, that the DVD has now been discontinued. You'll have to buy a new copy as quickly as possible, or just purchase a used one from here or elsewhere.

Grade: A
5 people found this helpful

Tpr. JoeReviewed in the United States on July 7, 2022
5.0 out of 5 stars
Outstanding Portrayal of Corruption in the NYPD
Verified purchase
The cast was outstanding. A true human interest story about Frank Serpico. If you enjoy movies about Law Enforcement and government, you will enjoy this one. It's also cool that the movie was made several years ago and the scenery reflects the era. Recommended.
One person found this helpful

Andy BeharieReviewed in the United States on July 29, 2022
5.0 out of 5 stars
An honest cop. Most importantly... A true story
Verified purchase
One of Al Pacino's best movies.
See all reviews
Back to top
Get to Know Us
Make Money with Us
Amazon Payment Products
Let Us Help You
EnglishChoose a language for shopping. United StatesChoose a country/region for shopping.
© 1996-2022, Amazon.com, Inc. or its affiliates