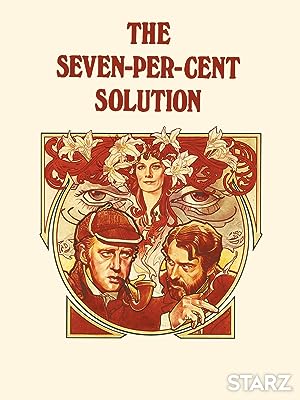 H. BalaReviewed in the United States on November 24, 2015
5.0 out of 5 stars
"Elementary, my dear Freud."
Verified purchase
In cinema I cherish two works of Sherlock Holmes pastiche above all else. WITHOUT A CLUE (1988) posits that it's Watson and not Holmes who is the brains of the outfit. And THE SEVEN-PER-CENT SOLUTION (1976) reimagines the Great Detective as a delusional addict and partners him with Sigmund Freud to solve a kidnapping case. About the latter, writer Nicholas Meyer does a great job of adapting his own novel - and I loved the novel! - to the big screen.

Backstory, have some: In 1893 Arthur Conan Doyle, chafing under Holmes' popularity and wanting to move on to other projects, opted to send his creation plunging off the Reichenbach Falls. Came then a ten-year hiatus in which the world believed the Great Detective dead until, in 1903, Doyle caved to relentless public demand and Holmes resurfaced in "The Adventure of the Empty House." For the purposes of in-narrative timeline, Holmes was only believed dead for three years, with "The Final Problem" taking place in 1891 and "The Adventure of the Empty House" set in 1894. Somewhere, Professor Challenger and Brigadier Gerard are sulking.

Nicholas Meyer, in two formats, posits a what if. What if Holmes' demise had been all along a subterfuge to explain away his three-year absence? What if, instead, Holmes' cocaine habit had grown so severe that he'd succumbed to wild delusions and acute paranoia? What then but for Watson to stage a trail of bread crumbs to lead his frenzied old friend to Vienna, home to Sigmund Freud - in hopes that the Father of Psychoanalysis can root out those deep, dark secrets lurking in the cellar of Holmes' mind, secrets that long ago dispatched Holmes down a path of self-destruction.

And, in Vienna, as Holmes laboriously sheds the ravages of cocaine addiction, perhaps he can solve a case concerning the abduction of a famous actress (Vanessa Redgrave).

Me, I regard THE SEVEN-PER-CENT SOLUTION as a treasure from my childhood, movie and novel. I was a kid when I first saw this movie and had never before cared about Sherlock Holmes. After the movie, I suddenly developed a craving for Victorian-era mysteries and sought out Arthur Conan Doyle's canonical stuff and then the pastiches. THE SEVEN-PER-CENT SOLUTION is lavishly produced, from set to costume to atmosphere convincingly evoked. It presents authentic period color.

The three lead participants are masterful. I never would've pictured Robert Duvall as Holmes' steadfast companion, but here he is in what I consider to be the most human depiction ever of Dr. Watson. And his English accent seems spot-on. Alan Arkin as the celebrated Jewish psychoanalyst projects formidable intelligence and a serene bedrock presence, except every now and then he allows the man's natural instincts against injustice to surface (the scene with Freud's "duel" with the overbearing nobleman is utterly gratifying, his choice of weapons wickedly inspired).

To me, it's Nicol Williamson's live wire performance that charges the movie. I won't say that he's the best to play Holmes, but he surely captured the detective's signature characteristics. Williamson's Holmes, in thrall to cocaine, is even more neurotic, twitchy, mercurial, and now prone to distorted perceptions. The screen bristles when Holmes is on it, prowling about and about to jump out of his skin.

And, probably, you'd already been spoilered as to what's up with Holmes' great nemesis, that Napoleon of Crime, Professor Moriarty. On the off-chance that you haven't, I'll just mention that Sir Laurence Olivier turns in an effective yet unexpectedly meek performance.

There is humor. There is playfulness. There are moments of sheer showmanship. There are nods to the Holmesian mythos. Familiar catchphrases turn up ("You see, but you do not observe."). There is action and derring-do (the train race in the third act fairly howls Buster Keaton's THE GENERAL). But what drives the narrative is the engrossing interplay between Holmes and Freud. It's a pretty inspired pairing, really. These two icons take turns schooling each other in their respective trades and learning that there's an overlap between their provinces. Surprisingly, the real-life historical character proves himself equal to the fictional literary character. I'm so glad that Freud isn't marginalized as some person who merely stands there bedazzled by Holmes' sharp observations. In fact, there are moments in which Freud exhibits his own impressive knack for deductive analysis. And, in the end, turns out it may not be Holmes who is the greatest detective after all. This is such a captivating and endlessly rewarding watch.

David W. NesbittReviewed in the United States on June 28, 2015
4.0 out of 5 stars
My opinion of this movie has changed over the years for the better!
Verified purchase
I had seen this when it first came out in 1976. Three years later it was showing at the dollar movie theater in Carmel, IN and I took my girl friend (and my wife of today - Diane) to it. She liked it a little better than I did!

I'm kind of a Holmes/Watson fanatic (along with a Nero Wolfe/Archie Goodwin one!) so the changes in the cannon bothered me then. Having Sherlock's dad kill his mom for cheating with Profession Moriarty was both clever AND irritating. Clever in so much as it explains much of Holmes character, choose of career, mistrust (on some level) of females, etc, etc..

But irritating because it changes the basic Holmes character in too many ways - at last for me.

The pictures was great - at least as good as it was when first released - sound was very good as well! Price was just $20 and included shipping. The Blu-ray arrived very quickly and in new condition.

I would rate this movie a little higher having seen it 3 times now - 8.25 to 8.75 recommended if Holmes/Watson fan, mystery fan in general or just curious to see Holmes reimaged slightly!
11 people found this helpful

TheTruthReviewed in the United States on January 18, 2016
5.0 out of 5 stars
My favorite movie ever!
Verified purchase
Ok well I know this may sound odd but this is my favorite movie ever. I saw it when I first came out in 1976 and loved it since. Now it happens to be that I am a private eye and when I was in school I use to be interested in freud, The story and production work go beyond the surface in the movie. Every time I watch it I see something else that adds more meaning to the events. Nicol Willamson who played holmes is a genius and you can see how well he fit into the Holmes role. Such a brilliant actor he was, Alan Arkin plays a great freud,,,,although he said in an interview he never really belived in freud...so he fashioned himself into freud as a detective,,,in addition he stated that he was really playing the postion of the writer's father who was a psychologist.....see interview of author on cd.....Robert Duval plays a smart Watson and does a great job.
Movie is great
7 people found this helpful

Steve SquibbReviewed in the United States on February 19, 2014
4.0 out of 5 stars
Holmes, Freud and the Orient Express
Verified purchase
In light of the recent resurgence in popularity of Sherlock Holmes, this movie has got up to the zeitgeist. Actually this film would fit nicely with Guy Ritchies Sherlock and TV Elementary. It is a interesting take on alternate history. What if Holmes cocaine addiction became so out of control that his good friend Watson conspires with Mycroft (Sherlock's brother to lure him to Austria to be treated by Sigmund Freud. There you have the set up for this movie. The cast is are all very accomplished actors only Robert Duvall as Watson seems a little awkward. Allan Arkin is a great Freud and Nigel Hawthorne is great \manic depressive Holmes. Lawrence Olivier seems as bewildered as his character Moriarity. Who in this tale is not the master criminal portrayed in other Holmes stories. The Austrian setting makes for an interesting back drop. The injection of the Ottoman Empire adds a little more exoticism that fits perfectly with a Victorian adventure yarn. Duel by tennis racket and fencing on top of a train all very entertaining.. I saw this movie in the seventies and in my opinion it has aged very well.
4 people found this helpful

Miles N. FowlerReviewed in the United States on October 6, 2016
4.0 out of 5 stars
Charming Sherlock Holmes adventure
Verified purchase
This charming re-imagining of the adventures of Sherlock Holmes is fun even if it does turn into The Great Chase toward the end. (If you like a good chase scene, then you will perhaps like this movie even more than I did.) For my money, the best scene in the movie is the one in which Sherlock Holmes meets Sigmund Freud, and without having been told a thing about him proceeds to tell him what his background is, and then, of course, identifies all of the clues that led to his conclusions. This is not actually based on an Arthur Conan Doyle story, and yet it frequently seems just like one.

Nick VillaireReviewed in the United States on December 1, 2018
5.0 out of 5 stars
Everyone should see this!
Verified purchase
I just recently picked up a copy of Nicholas Meyers book The Seven-Per-Cent Solution and when I realized halfway through that there was a film I rushed to Amazon to find it. Luckily Shout Factory, who I love, had come out with a blu ray and I sat buying my nails waiting for it to arrive. Once it did I was absolutely overjoyed with the overall film. I actually liked it a little more than the book. Meyer, who also wrote the screenplay, changed just enough of the second half to make it new and interesting and ultimately beautiful. The blu ray transfer looks fantastic except for a strange moment where there was a color problem but that only lasted a moment. Buy this film of you love Sherlock Holmes, great acting, beautiful locations and movies in general.

EnochReviewed in the United States on September 23, 2021
5.0 out of 5 stars
Alan Arkin shines
Verified purchase
Alan arkin is the star of this movie. Robert duval plays a great Watson. Sherlock is not memorable but the movie is not about Sherlock. It’s surprisingly not dated and stands on its own The venessa storyline is meant to add some jazz to the script. Freud is perceived as religions or respectful of the religion of his ancestors. He was not. In fact he fought to denigrate the Torah and Moses.

Doctor JohnReviewed in the United States on February 14, 2013
5.0 out of 5 stars
Blu-ray edition of Seven-Per-Cent Solution
Verified purchase
Fantastic film, and even more fantastic transfer to Blu-ray. Never saw the film before, nor the SD DVD edition; bought it on a whim after seeing the actors in it. Extraordinarily good acting, high production values, far above average BD transfer.

NOW, if "they" would only release a comparably good BD of "The Private Life of Sherlock Holmes" (1970, MGM/UA) - it would be perfection for Baker Street Irregulars!
12 people found this helpful
See all reviews
Back to top
Get to Know Us
Make Money with Us
Amazon Payment Products
Let Us Help You
EnglishChoose a language for shopping. United StatesChoose a country/region for shopping.
© 1996-2021, Amazon.com, Inc. or its affiliates