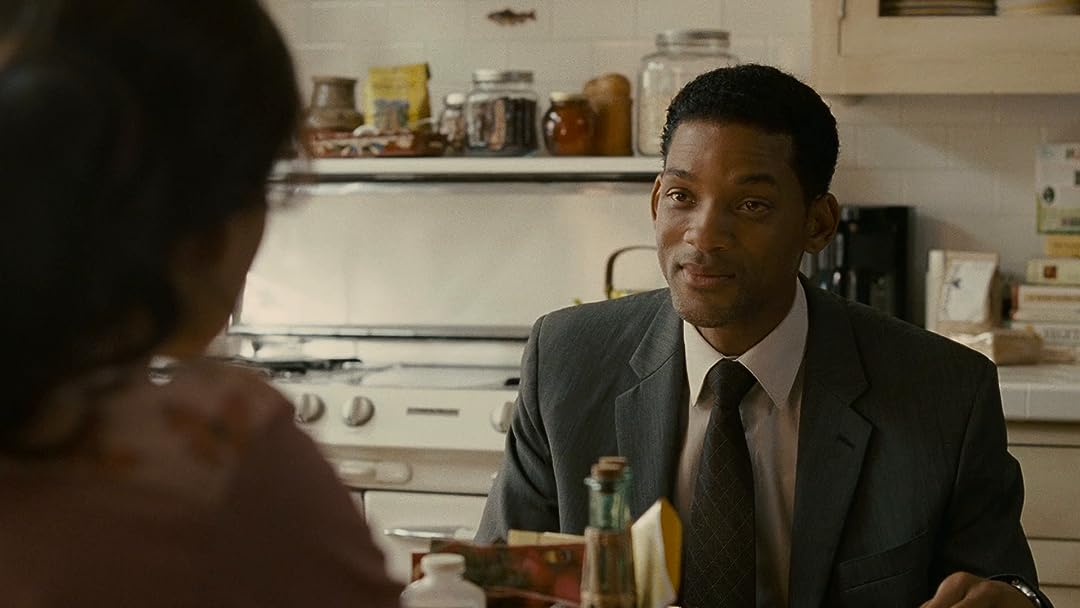 (3,918)
7.62 h 3 min2008X-Ray16+
Academy Award® nominee Will Smith stars in this drama, re-teaming with the director and producers of The Pursuit of Happyness for the emotional story of a man who will change the lives of seven strangers.

Hugh MayReviewed in the United States on March 15, 2020
2.0 out of 5 stars
Serious medical, ethical, and theological shortfalls
Verified purchase
The best thing I can say is the film is a good example why not to text while driving.
This film has serious medical, ethical, and theological shortfalls. This film is a mixed bag that includes beautiful scenes, great acting, and some surreal filming suggestive of 1960's art house films. I am a huge Will Smith fan and enthusiastically support his film Concussion.
While I suggest watching Seven Pounds for those reasons, I have many objections from medical, ethical, and theological standpoint.
As a medical person who has seen transplants performed, the medical presentation has flaws. In oversimplified terms, the recipient of the heart transplant in the film is shown simply lying sleepy on a OR table. In reality that person would be fully intubated and monitored. It is an extraordinarily highly complex undertaking.
Organ donor selection is very complex. I suspect that a person who had just been killed by a highly poisonous toxin from a jellyfish would be rejected for transplant. The basic premise in the movie therefore is flawed.
From an ethical and theological perspective "Ben" plays God and rejects forgiveness. As such, it is faux Christianity and could be considered profoundly not Christian. There is no evidence he has sought professional psychiatric help for his profound grief from the car accident he caused. Nor has he sought forgiveness. He is a lone wolf who lies and presents himself falsely. He is a godlike control freak. The parallel to Jesus' sacrifice is false as Jesus message was given to the good and the bad, not just the good. Suicide has a history of being considered a mortal sin, although it is much more nuanced today.
The pound of flesh references Shakespeare's Merchant of Venice, act 4 scene 1, speech of Portia. In the same scene she has one of the most sublime speeches in Western literature regarding the quality of mercy.

Jenny JonesReviewed in the United States on April 16, 2020
5.0 out of 5 stars
I'm glad I didn't read the reviews!!!
Verified purchase
This was a really, really good movie. I get annoyed at some of the critical reviews, quick to point out the reality, etc.
Please. When I rented this movie, I knew it wasn't going to be a documentary---
It's a fabulous, selfless movie, something so rare this day and time. Although the foundation is based on heartache, the take-away is the motive of this man's actions being based on true giving.
Someone made a ridiculous slam against the "playing God" aspect. I heartily disagree. Greater love hath no man than he who lays down his life for another.
May it affect us all the way the script intended---hopefully changing our perspective and our actions.
Will Smith and the rest of the cast were superb.
Its been a long, long time since I've watched a movie that challenged the way I view life. Thank you!!!
19 people found this helpful

RE PenceReviewed in the United States on July 12, 2021
1.0 out of 5 stars
Depraved and Twisted Ideology
Verified purchase
The acting was fine or whatever. The plot and ideology behind it are twisted and depraved. At root, Will Smith's character puts himself in the place of God, controlling who is going to be allowed to live or have a better life, and using parts of his body and life to do so, ultimately with the goal of suicide in donating his heart after killing himself--or rather, allowing a jellyfish to do so, even though technically that jellyfish would not be able to do that in the bathtub of fresh water (just in case a suicidal viewer decides to do that or a psychopath thinks of murdering someone in that way).

So in order to justify killing himself and making himself feel better for his carelessness with phone or such causing a car accident, he plays God, and what the movie maybe hopes will pass as great courage and selfless heroism, is actually always and only self-serving means for Smith's character to try to make himself feel better for the outcome of accident, lives taken. And somehow, then, suicide all along his goal as he could not cope with living with himself for his human error, tragic as it was, suicide is to be justified and acceptable because he chose whom to help by gradually donating parts of himself--body and his house.

It's not way to live, and no way to die, either one. Self-serving from the start and in the end although trying to deceive himself and others in the drama as well as viewers, that somehow he is a sacrificial hero, a god-figure, yet somehow really just a mentally depraved and twisted, very depressed person without courage to forgive himself and live out his life like the rest of us are supposed to do and do so with real courage, even if we accomplish nothing other than show the strength and endurance to keep going until God chooses.

Of course, this movie is not based on God even though it steals God's thunder, so to speak, and tries to mimic some sort of Christ figure in the character Will Smith plays. Regret that I watched it, but I did not read reviews first other than saw all the nearly five stars on Amazon. And during the film, it was contorted enough I could not see where it was going until toward the demented, depressing, twisted end.
10 people found this helpful

Mack E. TanReviewed in the United States on December 1, 2020
5.0 out of 5 stars
A dark & powerful fairly tale
Verified purchase
Anyone who has suffered profound grief after losing a loved one suddenly will understand Ben. I have, and I know the grief & despair send you to another zone of consciousness where the world you live in loses meaning. In shock, despair, grief, remorse, Ben develops his plan for atonement. The utter irony is that he finds a love that can pull him out of his darkness but he discovers that to save the girl he loves, he must go all in and give her his heart. I love this film and I always cry audibly at the end, at the moment Emily meets Ezra. (As an aside, this is the second film in which Barry Pepper plays the guy who's asked to do something unbearable for his close friend, the first being the 25th Hour where he completely falls apart when making his buddy ugly for prison.)
I highly recommend this film.
10 people found this helpful

Tell Me A StoryReviewed in the United States on October 28, 2021
1.0 out of 5 stars
Serious Topic, Deeply Distressing Response and Message
Verified purchase
I concur with another review's mention that this is a look at ethical matters. If you just watch movies as a distraction that you will want to skip what follows, however just because you reject a matter because it is on screen doesn't meet it doesn't communicate to your unconscious mind, if that didn't work a lot of truly annoying advertisements wouldn't be used. However, science proves that those things that are memorable can become deeply anchored and embraced regardless.

If you do not wish to read anything modestly spoilerish here then do not continue.

Will Smith is responsible for something egregious though we don't know what until most of the way through. He decides to takeover the role of God in his life and deliver punishment and rewards his own way, though most of society agrees this action is wrong. Even worse, the depiction is shocking and distressing. I was quite upset for days after watching and I wished I had read reviews prior to spending two hours watching this horrible "message" movie. Two wrongs don't make a right and I found the moral everything but moral.

Darrick MillsReviewed in the United States on July 18, 2021
5.0 out of 5 stars
Bravo
Verified purchase
First off, the trailer and clips about this film do not do it justice at all.

This is a very heavy drama movie, and I mean the good type of drama that really makes you feel what is going on with the characters in this film. It is seriously good, and really has an awesome twist to it. Its just one of those rare movies that pulls on your soul.

Please give this film a watch. The beginning may seem a little slow and all, but its all part of the story and lets you know where the characters are coming from. Excellent film.
One person found this helpful

AgilebrainzReviewed in the United States on March 16, 2017
5.0 out of 5 stars
Must see- maybe skip the popcorn
Verified purchase
This is one of those movies that is so powerful, and so well done, that you can only watch it once in a great while. It really sticks with you. An absolute favorite. Just wow.
23 people found this helpful
See all reviews
Back to top
Get to Know Us
Make Money with Us
Amazon Payment Products
Let Us Help You
EnglishChoose a language for shopping. United StatesChoose a country/region for shopping.
© 1996-2022, Amazon.com, Inc. or its affiliates