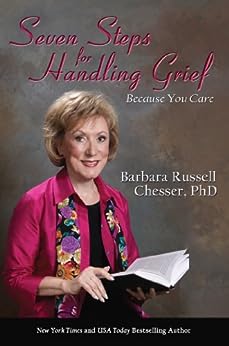 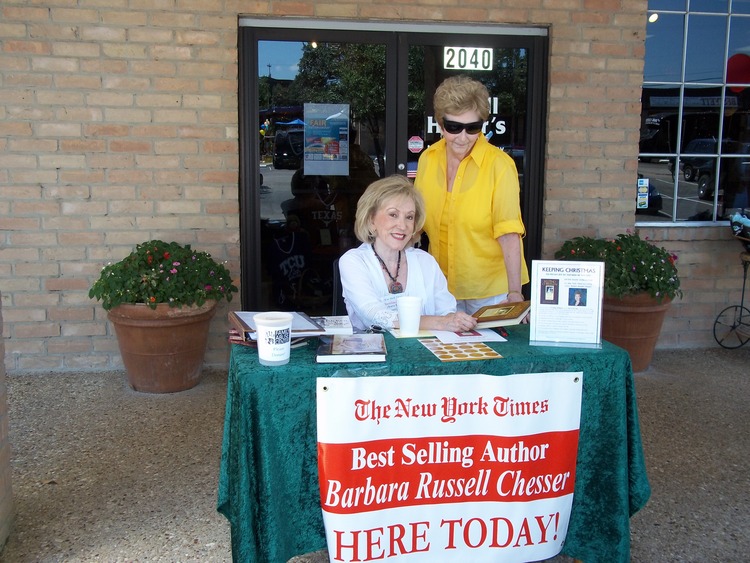 Seven Steps for Handling Grief: Because You Care Kindle Edition

by Barbara Russell Chesser (Author) Format: Kindle Edition
See all formats and editions
Sorry, there was a problem loading this page. Try again.
“Let me know if there is anything I can do.” This well-meaning offer is frequently expressed when a relative or friend suffers a death or other heart-wrenching loss such as divorce, termination of a job, having to put a parent in a nursing home or Alzheimer’s facility, loss of one’s home, or the “empty nest” syndrome. This book moves beyond that offer and other platitudes and gives practical steps to take to help alleviate the pain of loss—the heartbreak from a variety of shattering experiences. These steps are drawn straight from real-life experiences; the stories of people demonstrate how one or more of these seven steps helped them turn grief of futility and despair into understanding, faith, and hope.
Read more
Previous page
Next page

The New York Times bestselling author Barbara Russell Chesser is uniquely qualified to write this book. She has personally triumphed over a variety of griefs, and as a university professor she conducted research on grief and taught courses about it. Her work with families and individuals has taken her to the African countries of Nigeria, Swaziland, Tanzania, and Morocco, and to the Philippines and Greece. The sole author of four books and co-author of four other books, Dr. Chesser is also the editor of several volumes and author of numerous articles, including features in Reader's Digest. --This text refers to an out of print or unavailable edition of this title.

New York Times bestselling author Barbara Russell Chesser, PhD, is sole author of four books, co-author of four other books, and editor of additional books. Dr. Chesser especially enjoys writing about people. For example, Chicken Soup for the Golden Soul, co-authored by Dr. Chesser, is a collection of inspiring short stories about extraordinary people 60 and over such as Ruth Stafford Peale, Tom Landry, Nancy Reagan, and others. One of the most popular volumes in the phenomenally successful Chicken Soup series, this book has appeared on every major best-seller list and has been translated into seven languages.

Just released (Sept. 2011) is Keeping Christmas: Stories to Warm Your Heart Throughout the Year, Volume Two, that includes &quot;Three Letters from Teddy,&quot; a longstanding favorite, as well as stories by Randal O'Brien, Paul. J. Meyer, and other notables. Volume One continues to be a popular compilation of stories by much-loved authors such as Lewis Grizzard, Leo Buscaglia, and Barbara Johnson. Not only are these two books great reads, they are beautifully designed and make great gifts.

Released in 2010 is Seven Steps for Handling Grief, published by Sunstone Press. Here is one of the endorsements: &quot;Dr. Chesser has done a wonderful service in writing this book. She has faced the specter of loss with authority, compassion, reality, and hope. At some time--sooner or later--everyone will need this helpful, heartwarming book.&quot; Bestselling author Dr. Chesser is uniquely qualified to write this book. She has personally triumphed over a variety of griefs, and as a university professor, she conducted research on grief and taught courses about it. This book shares many stories about people who've suffered terrible losses yet overcame them with the help of others. A very interesting, practical book.

Remembering Mattie: A Pioneer Woman's Legacy of Grit, Gumption, and Grace is Dr. Chesser's account of her remarkable pioneer grandmother. This intriguing book is a treasure trove of &quot;snapshot&quot; stories from the past--for example, how Mattie's mother, as a 16-year-old, fell in love with a day laborer on the family's Mississippi plantation. Disowned by her parents, the young bride and her new husband tried to eke out a living in several places, including a cotton farm near Dallas, Texas. But when the Homestead Act opened up more &quot;free&quot; land, the fledgling family joined many others on trains and covered wagons to stake out their claims in eastern New Mexico.

Mattie's struggle to survive a rattlesnake bite, the death of her mother, how Mattie won the heart of the wide area's popular fiddle player, and how her heart was broken when the Spanish Flu epidemic of 1918 snuffed out the life of her young husband and father of their three small daughters are among the many stories of triumph over tragedies.

Various relatives provided significant information and illustrations; their names are on the book cover. Another invaluable resource was Mattie's oldest daughter and Dr. Chesser's aunt. Ninety-three at the time the book was finished, this aunt shared family pictures from the early 1900s as well as Mattie's love letters. Throughout the book are copies of interesting old newspaper clippings and documents, including Mattie's homestead papers and legal papers dealing with custody of her three young daughters. Relevant information about what was going on in the world at the time--such as the Great Depression and the Dust Bowl--provides a meaningful backdrop for Mattie's life story. A finalist in the '08 New Mexico Book Awards competition, this compelling book has been nominated again for the '09 award.

Barbara taught at several universities, including the University of Nevada, the University of Nebraska, the University of Arkansas, and Chapman College (Orange, CA), and she served in the administration of Baylor University. She also carried out short-term assignments in Greece, the Philippines and the African countries of Nigeria, Tanzania, Swaziland, and Morocco. As recipient of several awards for outstanding teaching, writing, and research, Dr. Chesser has also written for various publications including Reader's Digest.

This author lives in Waco, Texas, with her husband (also &quot;Dr. Chesser&quot;), a retired Baylor University professor of accounting. They have one daughter, who is also a CPA, a son-in-law who is an officer in the Coast Guard, and two grandchildren.