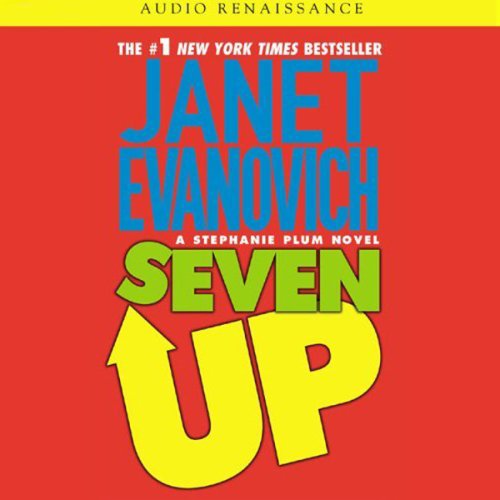 Janet Evanovich (Author), Lorelei King (Narrator), Macmillan Audio (Publisher) & 0 more
4.6 out of 5 stars 2,152 ratings
See all formats and editions
Sorry, there was a problem loading this page. Try again.
All New Jersey bounty hunter Stephanie Plum has to do is bring in semi-retired bail jumper Eddie DeChooch. For an old man he's still got a knack for slipping out of sight...and raising hell. How else can Stephanie explain the bullet-riddled corpse in Eddie's garden? Who else would have a clue as to why two of Stephanie's friends suddenly vanished? For answers Stephanie has the devil to pay: her mentor, Ranger. The deal? He'll give Stephanie all the help she needs...if she gives him everything he wants.

As if things weren't complicated enough, Stephanie's just discovered her Grandma Mazur's own unmentionable alliance with Eddie. Add a series of unnerving break-ins, not to mention the bombshell revelation leveled by Stephanie's estranged sister, and Stephanie's ready for some good news. Unfortunately, a marriage proposal from Joe Morelli, the love of her life, isn't quite cutting it. And now, murder, a randy paramour, a wily mobster, death threats, extortion, and a triple kidnapping aside, Stephanie's really got the urge to run for her life.

Special invitation from Audible!
Learn more about Membership
List Price: $27.93
You Save: $9.94 (36%)
By completing your purchase, you agree to Audible’s Conditions Of Use
Sold and delivered by Audible, an Amazon company
Share

4.6 out of 5 stars
4.6 out of 5
2,152 global ratings
How are ratings calculated?
To calculate the overall star rating and percentage breakdown by star, we don’t use a simple average. Instead, our system considers things like how recent a review is and if the reviewer bought the item on Amazon. It also analyzes reviews to verify trustworthiness.
Top reviews

Amazon Customer
1.0 out of 5 stars Waste of time and money. Stopping the series here.
Reviewed in the United States on July 12, 2019
Verified Purchase
For almost $10 a book AND the fact that the series is going into book 25, I thought this must be a great series to get into and catch up on. I was wrong. Don't fall for it.
1. Use adult language. Seriously, if charactera can curse then you can call male genitals what they are instead of twigs/berries, lumpy whatnots, etc. Grow up.
2. How can both sisters have college degrees and both be unable to obtain jobs except at malls or factory floors? What were their degrees in? They need to get those jobs, even entry level.
3. Is the author under the assumption that people from New Jersey are slower to mature and unable to grow as people? This love triangle nonsense WHICH APPARENTLY GOES ON FOR THE NEXT 17 BOOKS shows a lack of maturity I do not expect to find in 30-something year olds for extended periods of time. This isn't Twilight or Hunger Games.
4. Who checks on continuity? One main blaring item already is how Vinnies bond business works and whose money is really on the line. It started with it being the insurances money and no real crisis for Vinnie. It has moved on through the last few books to coming out of Vinnies pocket and directly affecting him. Also the ownership changes by later books, making the business belong to his father in law Harry the Hammer.
5. Bestiality is not funny. It's animal abuse. It may seem risque, but making light of it is wrong.
6. It's OK for relationships to end and for characters to move on, but to make people cheaters unable to move forward or allow others to is just wrong.

Claire L.
5.0 out of 5 stars Love Stephanie Plum
Reviewed in the United States on November 25, 2020
Verified Purchase
The Stephanie Plum series will never win any literary awards, but they are my favorites. If you have never read one of Janet Evanovich's books about this Trenton, NJ bounty hunter, you must. In these stressful days, it's great to just laugh out loud. With this books, each page will have you laughing. The trials of Stephanie, both personal and professional are totally relatable.
Read more
5 people found this helpful
Helpful
Report abuse

Caryle Cirello
3.0 out of 5 stars Disappointing
Reviewed in the United States on November 9, 2020
Verified Purchase
I was really into the Stephanie Plum series by Janet Evonavich and kept buying one book after another. I told several people about them including my sister because Grandma Mazur reminded me so much of my mother. This particular book had too many characters, a convoluted story line and a disappointing love story. I'm going to take a break for a while and think about whether or not I'll go back. Up until this one I loved them.
Read more
4 people found this helpful
Helpful
Report abuse

Karol Love
5.0 out of 5 stars Love This Book
Reviewed in the United States on December 18, 2014
Verified Purchase
I loved this book. The Stephanie Plum character is hilarious. It is hard to make me laugh that hard but this book truly does. Plum is a bounty huner from the burg who works for her cousin Vinnie. He owns a bale bonds in Trenton New Jersey. Word gets around that a seventy year old retired mobster by the name of Eddie DeCooch can out run her even though he has cataracts, loss of hearing and a bad prostrate. It is Plums job to bring him in to set a new court date since he skipped his first one. His charge is trafficking contraband cigarettes. Not such an easy job, it turns out, since DeCooch has learned a lot of tricks over the years and isn't afraid to use his gun. Although, because he is pretty blind from his cataracts the bullets fly in crazy directions. Plum finds a dead woman in DeCooch's shed when she trys to track him down. She also has two friends from high school that are stoned most of the time and Mooner's brain is pretty fried from the drugs. Plum learns one one of her friens Doogie is missing and is somehow connected to DeCooch. All the twists and turns makes this book well worth the reading.
Read more
6 people found this helpful
Helpful
Report abuse

Mr. Joe
VINE VOICE
4.0 out of 5 stars Stephanie buys a pig's heart and tries on a wedding gown
Reviewed in the United States on April 22, 2004
Verified Purchase
Stephanie Plum is a bounty hunter working for her lecherous cousin Vinnie in Trenton, NJ. Klutzy Stephanie often mistakes her can of hair set for pepper spray, and forgets to charge her stun gun. It's a wonder she captures anybody.
HOT SIX ended with undercover vice cop Joe Morelli proposing marriage - sort of.
In SEVEN UP, Vinnie assigns Plum to seize Eddie DeChooch, who's jumped bail on a charge of cigarette smuggling. But Eddie refuses to be brought in until he finds something he's lost, and he's willing to resort to gunplay to make his point. But Stephanie hates guns - she keeps her .38 in a cookie jar. And what has DeChooch lost? All we and Stephanie know is that it has to be kept cold. In the meantime, Plum must mentally grasp Morelli's marriage proposal. They've an on-again, off-again relationship ever since Joe took her virginity on the floor behind the pastry counter of the bakery where she worked at eighteen. Mrs. Plum, whose nightmare is her daughter as an Old Maid, takes Stephanie out to try on wedding gowns when the latter, in a desperate moment at the Plum family dinner table with guest Joe, blurts out "August!". Will it happen, you think?
Now seven novels into the Stephanie Plum series, it's evident that Evanovich writes to a fairly rigid formula, at least so far: Plum gets an ostensibly easy assignment that goes terribly wrong when her quarry proves elusive and one or more bodies are discovered; Stephanie has car problems; Stephanie must temporarily put up with an eccentric roommate; Stephanie dotes on her pet hamster, Rex; Stephanie is followed by suspicious characters; Stephanie takes her Grandma Mazur to viewings at local funeral parlors; Stephanie's sidekick in dysfunctional fugitive apprehension is Lula, ex-ho and Vinnie's file clerk; Stephanie has the hots for fellow bounty hunter, the mysterious Ranger. Whatever fantastical situations and characters the author additionally creates seem to be outlandish for their own sakes rather than maturing her heroine's persona. While that's not necessarily bad, it does lend each book a strain of boring predictability. The author needs to expand Stephanie's horizons. And I'm becoming increasingly annoyed that Plum's long-suffering parents remain ciphers.
Mind you, I still enjoy Stephanie's adventures immensely. But I'm unwilling to award any more five-star ratings unless Evanovich provides something surprising or very clever.
Read more
7 people found this helpful
Helpful
Report abuse
See all reviews

G. G. Curtis
5.0 out of 5 stars Up there with the best
Reviewed in the United Kingdom on May 12, 2011
Verified Purchase
When I began reading my first Stephanie Plumb book [ One for the money ] I didn't know quite what to expect. However I very quickly discovered it was an absolute gem, and as I read more and more of Janet Evanovich's books about the misfit bounty hunter and as the characters evolved and became more and more interesting [ grandma Mazur is something else isn't she; likewise Lulu is one hell of a girl ] they got better and better, and I have now lost count of the times I have cried laughing aloud as I read them.

I'm now up to 'Seven Up' and a devoted 'Stephanie Plumb' fan.

Humour and crime stories may not be everyones cup of tea, but if these categories appeal to you [ and I asume they do, otherwise you would probably not be looking at this review in the first place ] and if you haven't already done so, all I can say is give Spephanie Plumb a go. But if you do, read them in sequence because the characters do evolve from book to book.
Read more
Report abuse

Juliette
3.0 out of 5 stars A curate's egg - good in parts
Reviewed in the United Kingdom on January 4, 2006
Verified Purchase
Others will describe the plot. This review is for quality of the plot and dialogue.
If you are new to the Evanovich Stephanie Plum series start at One for the Money and then go on to Two for the dough. Seven up is funny, but not as good as the earlier books.
There are some laugh out loud moments, but the story isn't the strongest and it does feel as if Evanovich was working to a deadline so it isn't as polished as some of her other works.
Still worth buying, I wouldn't pay for a hardback copy.
Read more
4 people found this helpful
Report abuse

Mojó
5.0 out of 5 stars Great series of books
Reviewed in the United Kingdom on July 3, 2019
Verified Purchase
I love this author. Her books are funny and laugh out loud sometimes. I want to get the whole series if books
Read more
Report abuse

cornish katy
5.0 out of 5 stars Each book can be read As a one off...genuine LOLS!
Reviewed in the United Kingdom on October 11, 2019
Verified Purchase
Love this, so much I think I now have the entire series!
Read more
Report abuse
See all reviews
Back to top
Get to Know Us
Make Money with Us
Amazon Payment Products
Let Us Help You
EnglishChoose a language for shopping. United StatesChoose a country/region for shopping.
© 1996-2021, Amazon.com, Inc. or its affiliates