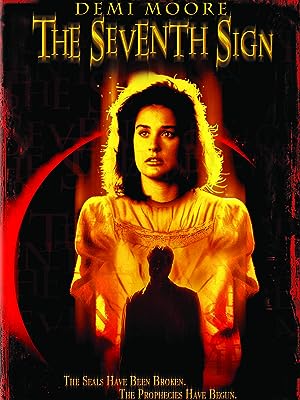 (1,922)5.91 h 37 min1988R
Demi Moore electrifies as a young woman who must prevent her unborn baby from playing an ominous role in the coming of the end of the world.

Quiet KnightReviewed in the United States on September 11, 2018
5.0 out of 5 stars
"The Seventh Sign" Now Appears On Blu-Ray From Scream Factory
Verified purchase
Scream Factory releases this biblically inspired supernatural thriller starring Demi Moore on Blu-ray for the first time, and is a huge improvement over the threadbare Columbia/Tri-Star DVD from long ago, now including a stunning new HD transfer and extras with several cast and crew interviews. No commentary, but still worth the purchase for fans.
11 people found this helpful

Double HappinessReviewed in the United States on November 29, 2019
1.0 out of 5 stars
THE END DOES NOT MAKE SENSE
Verified purchase
SPOILER ALERT.

It was a sacrifice for Abby to give her life for her baby and, therefore, save the world from ending. However, Abby was suicidal - - we see the scars on her wrists from a previous attempted suicide and we see her almost attempt suicide again in the movie. Even Jesus said that she lacked hope. It would have made more sense for a woman who valued her life to make that sacrifice.

I saw that one reviewer wrote that he never heard of The Guf and he believes that it does not exist. I copied this from Wikipedia regarding The Guf:

The Guf - - The Tree of Souls :
According to Jewish mythology, in the Garden of Eden, there is a Tree of Life or the "Tree of Souls" that blossoms and produces new souls, which fall into the Guf, also known as the "Treasury of Souls." Gabriel reached into the treasury and took out the first soul that came into his hand. Then Lailah, the Angel of Conception, watched over the embryo until it was born.

According to Rabbi Isaac Luria, the trees are resting places for souls. Sparrows can see the souls' descents, explaining their joyous chirping. The Tree of Souls produces all of the souls that have ever existed, or will ever exist. When the last soul descends, the world will come to an end. According to the Talmud, the Messiah will not come until the Guf is emptied of all of its souls. In keeping with other Jewish legends that envision souls as bird-like, the Guf is sometimes described as a columbarium, or birdhouse. The mystic significance of the Guf is that each person is important and has a unique role which only he or she, with his or her unique soul, can fulfill. Even a newborn baby brings the Messiah closer simply by being born. The Guf will empty as the last soul is given to the last baby born into the world and then the world will end and the Messiah will come.

Claire B.Reviewed in the United States on May 17, 2021
5.0 out of 5 stars
This movie aged well. It feels like the blueprint for the da Vinci Code.
Verified purchase
Although not a super production like da Vinci Code movie.. or movies.. this movie is less budget padded, however it has the many qualities of a well made movie that keeps you guessing and the suspense is oh well.. suspended.

Demi Moore delivers perfect role, so does Jurgen Prochnow and Michael Biehn. All cast is superb.

The plot of the subtle but clear signs of the end of the word happening in front of the world but dismissed for the normal news start adding up... and then you have handsome and young Jurgen Prchonow as an angel?.. Rider of the Apocalypse? Messenger of God's wreath?... .. what else could you wish for.

This movie is both, a good movie but also a good vintage production of the bygone era but it stands the test of the time. Just as the Ghost movie that Demie Moore stared in... precisely the same level of film.

Definitely worth watching. Although a drama, it has some mild comedic elements.
2 people found this helpful

I have been a fan of the genre, ever since I saw "The Omen" back in 1976. If you like these types of movies, you should also check out "Revelations". This movie, "The Seventh Sign" is not as good, in my opinion as The Omen, Omen II, Omen III:Final Conflict, and Revelations. However, it is well-made and the acting performances were very good. Perhaps one of the most solid performances from Demi Moore in her career. Michael Biehn and Jurgen Prochnow also lend their talents here.

The end of the world is coming, according to the signs. River water turning to blood, ice in the desert, and the moon changing colors are all signs that the end is near for mankind. The premise here is that the supply of souls in heaven has run out, and when the first soul-less baby is born, the destruction of mankind will be irreversibly set in motion.

The story takes place in Venice, CA. Of all places for mankind to prevent the apocalypse it had to be here, right? Well, you have to be willing to buy into it, naturally. An exotic setting, perhaps somewhere in old world Europe or the Middle East would have been my preference, but California is what we have. Abby and Russell Quinn play a young couple who is trying to have a child. Their first attempt ended in stillbirth. One day, a stranger claiming to be a linguist arrives in town and asks to rent the couple's garage loft. Not long after, a mysterious priest starts meddling in the couple's affairs, doing everything in his power to ensure that Russell's client (he is a lawyer) faces execution for his crimes.

This is a pretty good movie. If you have seen those other movies above, and you liked them, you will most likely like this one.
8 people found this helpful

Boudreaux's MomReviewed in the United States on September 15, 2013
5.0 out of 5 stars
Food for thought
Verified purchase
I first saw this movie when it hit the theatres back in the day when the only reviews were from movie critics on television and in the local paper. No one really knew anything other than Demi Moore was in it and she was actually pregnant. When the movie ended the entire audience got up and left the theatre in absolute silence. I've never had this experience again. The movie was food for thought. It's based on the 7 signs of the apocalypse found in the Bible and The New Testament but it is applied to the current day's happenings with explanations throughout the movie plot to help people who are not familiar with those teachings understand. With that being said it is not a bible thumping movie. You are taken through a whole chain of events (with a couple of twists) with the story being centered mostly around this young mother who is pregnant and her attorny husband that unknowingly are participants in the revelations. You may be able to guess the end of the story as it approaches but it doesn't soften the impact of the message. It you're a thinker, it leaves you speechless. I highly recommend it as a good movie whether you do or do not hold religeous beliefs.
9 people found this helpful

T-BoneReviewed in the United States on April 30, 2015
5.0 out of 5 stars
Thoughtful and character-driven movie...
Verified purchase
This 1987 is perhaps not a movie for everyone, but I've always loved it for: a. Jurgen Prochnow's incredibly nuanced performance as a man with a great and powerful secret; as well as the performance of Peter Friedman, a man haunted and cursed by a terrible and ancient sin. Demi Moore brings a deep poignancy to this movie, especially at the climax, where the fate of the world hangs upon her simple, but drastic, decision. By today's standards this would not be considered a "good" movie; no CG special effects, car chases, explosions, or eardrum-shattering soundtrack. But if you like a thoughtful and character-driven story that touches upon faith, myth, and the incredible dichotomy of the human spirit, than this is movie you may well enjoy...
9 people found this helpful

CamiliaReviewed in the United States on June 4, 2021
1.0 out of 5 stars
Could have been better at the end.
Verified purchase
What were they thinking when the director and screen writer?? Will start off with the ending. The ending did not make any sense. Im not going to really explain it because someone in a previous review said it all. Second, biblically speaking Jesus would not be walking on this earth again, going around the world breaking seals. Just go read the book of Revelation in the Holy Bible. Jesus breaks the seals in heaven. When Jesus returns everyone on earth will see Jesus coming from. EVERYONE!! That mean even people from Australia will see him. Jesus will not be on the earth with no one knowing he's returning. Also the ending of the movie the could've been way better.
See all reviews
Back to top
Get to Know Us
Make Money with Us
Amazon Payment Products
Let Us Help You
EnglishChoose a language for shopping. United StatesChoose a country/region for shopping.
© 1996-2021, Amazon.com, Inc. or its affiliates