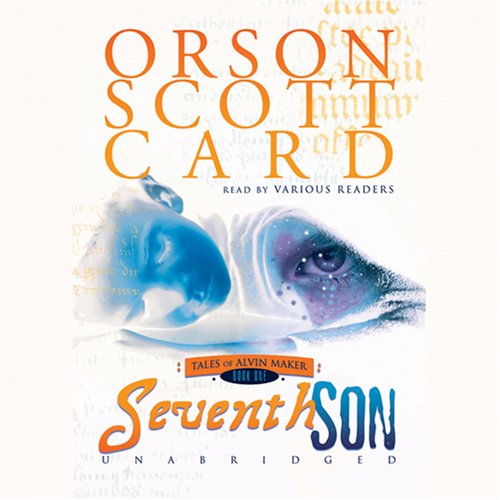 List Price: $19.57
You Save: $8.62 (44%)
By completing your purchase, you agree to Audible’s Conditions Of Use
Sold and delivered by Audible, an Amazon company
Share

4.4 out of 5 stars
4.4 out of 5
306 global ratings
How are ratings calculated?
To calculate the overall star rating and percentage breakdown by star, we don’t use a simple average. Instead, our system considers things like how recent a review is and if the reviewer bought the item on Amazon. It also analyzes reviews to verify trustworthiness.
Top reviews

GauntletsofRai
5.0 out of 5 stars A truly excellent read
Reviewed in the United States on October 1, 2013
Verified Purchase
If you enjoy either fantasy/sci-fi, alternate history, or even both at the same time, then this book is perfect for you. The story takes place in the alternate history-American colonies where everyone is gifted at birth with a special and sometimes magical talent referred to as a "knack." All throughout the story there exists a struggle between those who freely use their knacks as natural gifts from God, and those who see the knacks as witchcraft that should be abolished: a continual struggle between the perceived notions of what is "good" and what is "evil."
Orson Scott Card is a master at sci-fi, as seen from his "Ender's Game" series, and this series is no exception. The characters are fleshed out and believable, the dialogue is candid and thought provoking, and the entire series, this book included, is peppered with notable wise sayings and cameos from some of the most famous historical figures of the particular time period.
While Card takes some liberty in placing a few characters from history a little closer to each other than factually possible, these instances are so minute as to be negligible, and besides, anything can happen in an alternate universe, right?
If you decide to read this book, prepare to feel emotional connections with the well conceived characters, and the immersion that comes with a masterfully described universe.
Read more
8 people found this helpful
Helpful
Report abuse

Scott Reagan
5.0 out of 5 stars Wonderful book! ... but false product image/(bad) new cover.
Reviewed in the United States on June 7, 2019
Verified Purchase
Fantastic first book of a fantastic series. I lost my copy and wanted to replace it so I could re-read the entire series. Unfortunately, the old cover, which is shown in the product description, must not be made anymore, so I received a copy with a (in my opinion, TERRIBLE) new cover. I’ll be sending it back, because I want a copy with the old cover to go with the others in my collection. They should update the product image on Amazon, because it’s no longer accurate— or better yet, the publishing company should do away with the awful new cover and revert to the old!
Read more
One person found this helpful
Helpful
Report abuse

Surface to Air Missle
VINE VOICE
3.0 out of 5 stars Card's religious foray into a parallel 19th century....
Reviewed in the United States on July 12, 2003
Verified Purchase
I'm assuming that most people reading this review are fans of Card's Ender's Game and are wondering what else he has been up to. This book takes place on the western frontier of America circa 1801. In this parallel universe an alternate history has been written that is similar to our own but here common folk have magical powers that make life a little more interesting. Alvin is the seventh son of a seventh son and this is powerful and special birthright in this universe. This story is the first of five and much of it is exposition for the series.
A couple of things make this world interesting and Card's creativity shines through. Individuals in this world have special powers that range in power and usefullness. Some people have the ability to make a spark and light fires, one person has the abiltiy to find the best point to dig a well. Others have knacks for making protective hexes, or seeing your soul (called heartfire). Of course Alvin is not your average kid and his powers exceed and surprise thorugout the story in various entertaining manners. I really like the way Alvin is a character with exceptional morals dealing with various forces while trying to understand his adolescent view of the world. This first book sets the stage for two excellent followups before Card looses some steam and goes awry. The fourth book is average and the fifth book is downright bad. The family interaction is precious and Card gets away from this later on.
The religious aspect of this series is it's biggest downfall and the books where religion is more prominent are the weekest of the series. The Alvin Makers series is a loosely based on the Book of Mormon and Card tends to get a bit preachy at times (especially in the first book). This takes the book down a star as Card's dogma isnt necessary to the story or the actions of the characters. There are also mixed and hypocritical religious views within the stories that are too complex to go into here and needless to say religious zealots, born-again Christians and Orthodox Jews might get offended.
Bottom Line: This is good stuff if you can stomach the preaching and sentimental corniness. Books 2 and 3 are the Jewel of the series but these aren't really stand alone books.
Read more
17 people found this helpful
Helpful
Report abuse

don
5.0 out of 5 stars Maker series
Reviewed in the United States on April 17, 2014
Verified Purchase
I loved the start of this grand series. It was extremely well written and I just could not put it down until it was finished. This was a great character study and the plot left ,e reeling for more. Orson Scott Card did a wonderful job of weaving a tale that is actually written about an area were I grew up. I live on the Wobish River(Wabash) in Indiana and so it was like a fantasy that I was a part of. The plight of the Indians was marginalized but I guess things like that tend to happen unless a fantasy then turns into a true to fact historical documentary. I can not wait to read the next installment. Thank you for a great read.
Read more
One person found this helpful
Helpful
Report abuse

C. Weaver
4.0 out of 5 stars Not the Seventh Son movie, but would still make a great screenplay
Reviewed in the United States on September 29, 2015
Verified Purchase
Good book, required reading that I enjoyed. Although Card did write The Ender's Game which was made into a movie, This book has is not the Seventh Son movie and is an entirely different story line which was set in an alternate historic America of the 1800s.
Alvin Miller Jr. the seventh son of a seventh son, which has a magical birthright which has given him among other things a gift or "knack" for making things. This is the premise for the series the Tales of Alvin Maker.
The book is a good first in a series, action, suspense, the fight of good vs evil. I am ready for book two "The Red Prophet"
Read more
One person found this helpful
Helpful
Report abuse

BlazeWesley
5.0 out of 5 stars Orson Scott Card has never failed to deliver
Reviewed in the United States on March 29, 2020
Verified Purchase
I loved this book. It held me glued to the pages. I love the characters’ names and the Miller family. I can’t wait to see where this story goes from here. I’m buying the next book right now.
Read more
Helpful
Report abuse
See all reviews

Simon Haine
4.0 out of 5 stars A good start to the series
Reviewed in the United Kingdom on June 22, 2010
Verified Purchase
This is a book I had wanted to read for a couple of years now, after reading The Grinning Man short story found in  Legends: Discworld, Pern, Song of Ice and Fire, Memory, Sorrow and Thorn, Wheel of Time , but only just managed to get to. I wasn't disappointed.

The story starts well; with a fast-paced account of Alvin's birth, containing action, drama and some good old fashioned witchery. The first few chapters had me hooked.

I have to say though, the middle of the book slowed the pace right down, and dare I say - had some right boring bits that made it read more like a history book than a fantasy novel. I managed to get past this though, and thankfully it only seemed to last for around 50-60 pages.

The final third of this book saw a return to the form found at the start, and left me wanting more. I can't wait to read the second book in the series:  Red Prophet (The tales of Alvin Maker) .

I would recommend this book to anyone to read; it's funny, magical, thrilling and at times, sad.
Read more
2 people found this helpful
Report abuse

John Were
5.0 out of 5 stars Just as good as I remember from childhood
Reviewed in the United Kingdom on July 7, 2020
Verified Purchase
The danger of the pioneer life is not only physical accidents, but doctrine, philosophy and the inhabitants of the land before the pioneers arrived. All is masterfully juxtaposed for a consistent high level of tension.
Read more
Report abuse

Stephen McGlennon
5.0 out of 5 stars Not bad.
Reviewed in the United Kingdom on April 18, 2016
Verified Purchase
I bought this because Steve Harris from Iron Maiden said it influenced "Seventh son of a seventh son".

Jimk
5.0 out of 5 stars An interesting take combining real history, places and events with supernatural beliefs
Reviewed in the United Kingdom on August 2, 2020
Verified Purchase
Some times confused accidental spelling mistakes with deliberate word changes.
Read more
Report abuse
See all reviews
Back to top
Get to Know Us
Make Money with Us
Amazon Payment Products
Let Us Help You
EnglishChoose a language for shopping. United StatesChoose a country/region for shopping.
© 1996-2021, Amazon.com, Inc. or its affiliates