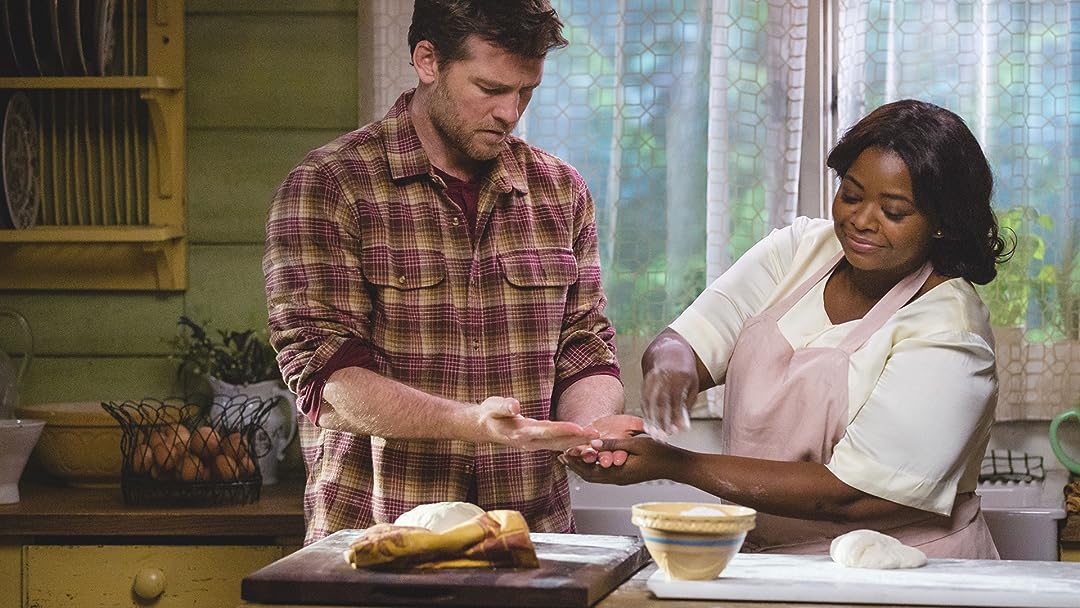 Kristin B.Reviewed in the United States on June 10, 2017
5.0 out of 5 stars
A Wonderful Spiritual Journey that will Turn You Upside Down!
Verified purchase
When I first heard that there was a new movie coming out in theaters called The Shack, I immediately looked to see if it was based on a book. I'm someone who prefers to read the book first since I love to read. I read the book and LOVED it so I planned to see the movie as well. I finally got a chance to watch it last night and had to give myself time to think about it before I wrote a review on it.

The Shack is based on William P. Young's bestselling novel about a man who goes on a spiritual journey. Mackenzie (Mack) Philips (Sam Worthington) loses his youngest daughter after a tragedy and he blames himself for it. He enters a time he calls The Great Sadness and wonders where God was when his daughter was taken and why would He allow such a thing to happen. Mack receives a mysterious note from Papa, the name his wife uses for God, asking him to meet Him at the shack deep in the wilderness of Oregon. After much deliberation, Mack heads there and embarks on the most soul-searching, trans-formative spiritual journey he has ever experienced. In addition to Sam Worthington, some other notable actors and actresses in this movie include Octavia Spencer who plays Papa and Tim McGraw who plays Mack's best friend, Willie.

This movie is approximately 132 minutes long and is rated PG-13 for thematic material including some violence. It can be watched in English and Spanish 5.1 Dolby Digital Audio, English Descriptive Audio, Spanish Subtitles, and English SDH.

I had already read the book when I watched this movie last night and I cried when reading it so I knew it would make me emotional but I didn't expect to cry during almost the entire movie. The Shack is definitely one of those movies that left me emotionally-satisfied and, if you are a crier, I would definitely grab a box of tissues before watching this. I thought the acting was phenomenal and I loved how beautifully this movie was done. I feel it followed the book pretty closely so if you are mostly interested in watching the movie instead of reading the book, I think you will still be able to really enjoy it. I'm glad I read the book first so I knew what to expect and it was nice to see how the movie was done, as opposed to how I pictured it in my mind.

If you've read the book and loved it, I highly recommend watching the movie. It's not scary necessarily and the violent acts aren't shown. Most of the violence is hinted at based on our knowledge of the subject (a child abduction) but there are a few things shown after everything's happened. Those parts were hard to watch but the rest of the movie was so good that I will definitely watch it again. I have a friend who is eager to see this as well since we both loved the book!

KPReviewed in the United States on March 29, 2017
5.0 out of 5 stars
This is a great movie and book
Verified purchase
This is a great movie and book. It's not easy to make a book into a movie considering time constraints and they did a good job. I highly recommend both. Some have said the story is not entirely scripturaly accurate. I believe they missed the point. It's a fiction which helps us adjust our perspective and realize God is good and loving. It's difficult to have a relationship with a relational God when we don't believe deep within us that He is good and loves us. As we draw close to God, He will sort out the rest.
505 people found this helpful

RJReviewed in the United States on November 29, 2020
1.0 out of 5 stars
A religious movie. Review contains spoilers.
Verified purchase
Movie should contain a TW for victims of abuse and parents/family of murdered children. And victims of religious manipulation.

Movie started out ok. Then got ridiculously religious. THEN, Papa God and her two buddies (Jesus and the Spirit) manipulate dude into forgiving his abusive father. THHEEEENNNN some Native Spirit Guide who is also a God buddy somehow, forces dude forgive his little girl's murderer.

What an absolutely disgusting, manipulative waste of time.
30 people found this helpful

Tim IsenhourReviewed in the United States on May 31, 2017
5.0 out of 5 stars
Took me by suprise
Verified purchase
You need to watch this movie several times to get the complete story.

This depicts each and everyone of us at one point in our lives. As with my life, there have been times of sorrow, great happiness, and then sorrow again; just to be restored by happiness. I hope this makes sense.

I often question God and why things happened but eventually I see the big picture of "it all" and things just simply fall into place.

I personally don't think it's wrong to question God, as I think it brings us closer. Where most go wrong is when they deny God when life doesn't go according to "their" plans.
70 people found this helpful

Wendy in OhioReviewed in the United States on May 27, 2017
5.0 out of 5 stars
Deeply Moving!
Verified purchase
A very moving movie. Much pause for reflection as the viewer takes time to consider what is happening. I have read the book "The Shack". The screenplay was well done. Sam Worthington's performance was outstanding. Tim McGraw is a supporting actor. I would recommend this. If anyone has lost a child it could be therapeutic. The event that caused the loss of the child in the movie was horrendous. There is, as I mentioned previously, some deep reflection going to naturally happen during the viewing.
56 people found this helpful

Amazon CustomerReviewed in the United States on March 4, 2017
5.0 out of 5 stars
I LOVED IT! If you read the book
Verified purchase
A must see! I LOVED IT! If you read the book, you will be delighted to know that the movie did not depart from the book at all. Just like the book, the movie is not about theology or a particular religious interpretation of faith. But rather a look thru McKenzie's human eyes at our eternal questions of; why we suffer? Why GOD allows it? And if HE allows it, doesn't it makes HIM a bad or evil GOD? And so many other questions that our limited mind can't understand... but wonders. I already pre-ordered my HD-DVD and plan to go watch it again at the theater. Go with your family and do no miss this experience...
330 people found this helpful
See all reviews
Back to top
Get to Know Us
Make Money with Us
Amazon Payment Products
Let Us Help You
EnglishChoose a language for shopping. United StatesChoose a country/region for shopping.
© 1996-2022, Amazon.com, Inc. or its affiliates