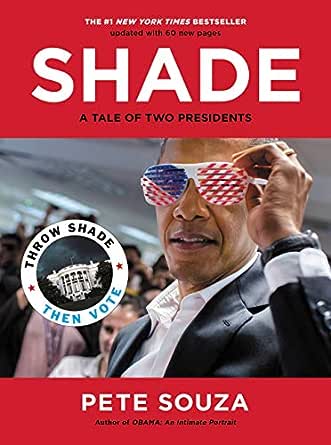 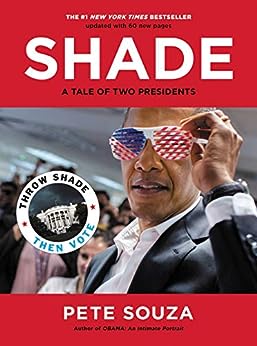 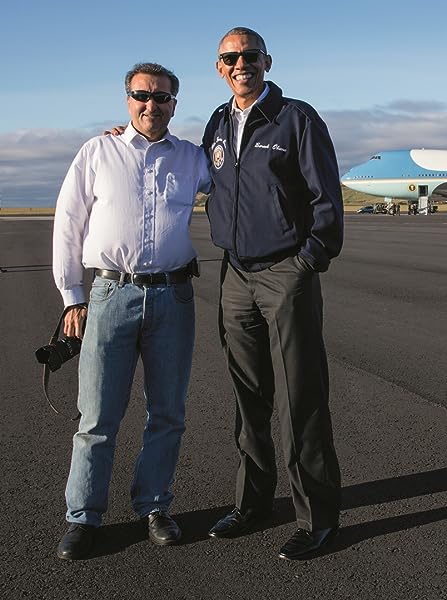 "Powerful... A striking, at times even hilarious book, but by the end it leaves the reader with a profound sense of loss... Shade drives home Obama's humanity and dignity and Trump's petty mind and epic failings like few other documents."―Rolling Stone

"These juxtapositions of permanence and transience are ultimately what make Shade a compelling read; powerful, memorable portraits of an eight-year presidency stand beside headlines and tweets that surface on Twitter feeds for a few days at most and then are brushed aside amid new ones. The book is not just a tale of two presidents, but a tale of two political and media landscapes."―NPR

"As President Obama's photographer, Pete Souza was one of the very finest official White House snappers. In his provocative Shade: A Tale of Two Presidents, he contrasts pictures of the 44th incumbent with vignettes from the administration of the 45th to caustic effect."―Ben Schott, The Guardian

"Pete Souza became an Instagram celebrity by documenting the White House. Then he became an even bigger one by criticizing it."
―New York Times

"A cool refuge from the heat of a very orange sun... [Shade] illustrate[s] the extent to which Obama's expansive ideals have been edged out by Trump's politics of meanness and resentment."―Shondaland

"Playful yet biting... commentary on Trump's current antics... to remind us what a president can be."
―BookRiot --This text refers to an alternate kindle_edition edition.

4.8 out of 5 stars
4.8 out of 5
2,492 global ratings
How are ratings calculated?
To calculate the overall star rating and percentage breakdown by star, we don’t use a simple average. Instead, our system considers things like how recent a review is and if the reviewer bought the item on Amazon. It also analyzes reviews to verify trustworthiness.

Compulsive Amazon Prime Buyer ;)
5.0 out of 5 stars Timeless Piece
Reviewed in the United States on October 16, 2018
A timeless piece. It reminds me of when I was proud of our president. The comparison between the two POTUS is astounding. The photographer/author did fantastic work and is a genius for putting it all together in this book. Extremely creative!
Read more
334 people found this helpful
Helpful
Comment Report abuse

Elisa 20Top Contributor: Health & Wellness
TOP 100 REVIEWERVINE VOICE
5.0 out of 5 stars ETA: Note re: p. 50 and 102. It's an artistic choice, making a point, not an error!!! Look and think about the content/contrast!
Reviewed in the United States on October 18, 2018
Verified Purchase
This is very different from the other two Souza books I have--one, serious photo retrospective of his presidency with many memorable photos and the other an inspirational book for children, illustrating "lessons" of life through Obama and his photos.

Those are very different from this one which is slyly witty in contrasting Trump's presidency and character (mainly through quotes, newspaper headlines and, of course, tweets) with Obama's. The left side has a Trump-related quote and the right has a photo Souza took of Obama in some kind of parallel moment, with Souza's own captioning often casting "shade" at the current occupant of the White House (or sometimes just letting the photo speak for itself). As if we might miss the point about choosing good v. bad leadership, the final page -- perfectly timed -- reminds about the importance of voting.

Note: this is a nice 7 x 9" hardback with glossy photo paper. Only one photo of Trump (not in person but on television--starting with the shade). I think the book is better off this way.
Read more
208 people found this helpful
Helpful
Comment Report abuse

Anna C Hayes
5.0 out of 5 stars Remembering When Politics Was Boring
Reviewed in the United States on October 16, 2018
Verified Purchase
I love this book! I have followed Mr. Souza’s IG account since last year, but there’s just something more satisfying about flipping through the contrasts he highlights in the physical form of a book. There photos are of course perfect, and the typesetting is a beautiful addition to the touching and often comical content. The Obama WH was far from perfect, but this book serves as an ode to a simpler, more optimistic (and certainly less mean!) way of governing that we really didn’t appreciate nearly enough while we had it. I had never seen most of these photos much less known the story behind them since I was never interested in politics beyond voting in presidential elections every four years. It’s bittersweet to recognize how boring things used to be, with scandals like the breaching of the Chipotle sneeze guard (the horror!). So yeah, plenty to miss about those days. No time to be disinterested these days!
Read more

Monique
5.0 out of 5 stars Page 102 isn’t an error
Reviewed in the United States on October 20, 2018
Verified Purchase
Love this book! I have the Obama book and have been following Pete on Instagram, as a way to help hang onto my sanity in these scary times. When I first saw page 102 I thought it was an error, but realized, given the content (blathering idiocy) that it was another example of Pete throwing shade. That and the blank Valentine’s Day page. Bam! If you’re considering buying this book, do it!
Read more
136 people found this helpful
Helpful
Comment Report abuse

C.P.
5.0 out of 5 stars Vote like your life depends on it. Because it does.
Reviewed in the United States on October 16, 2018
Verified Purchase
Loved everything about this book. I already purchased a second one which I am sending to my best friend. I’m buying a third one for my niece for her birthday. Something we all can laugh about together because this current President is a big disgusting joke. Got to find humor where we can.
Read more
126 people found this helpful
Helpful
Comment Report abuse

MMGKL
5.0 out of 5 stars Awesome!
Reviewed in the United States on October 16, 2018
Verified Purchase
So happy I ordered it ahead of time. So moving and relevant. The "shade " is perfect, just like it has been over the last two years. Brilliant juxtaposition of the crazy alternate universe of today with the presidential, genuine and historic Obama tenure. A little relief from the current self-serving bully in the White House.
Read more
67 people found this helpful
Helpful
Comment Report abuse

Wendy O
5.0 out of 5 stars Made in the Souza-Shade!
Reviewed in the United States on October 16, 2018
Verified Purchase
I just got it tonight and I haven’t been able to put it down! Pete Souza is such a talented photographer but also the most clever producer of shade towards the current administration. :)
Bravo!!
Read more
66 people found this helpful
Helpful
Comment Report abuse

Joker Fleck
4.0 out of 5 stars Good read!
Reviewed in the United States on October 24, 2018
Verified Purchase
Seems like so long ago that Obama was President. He was a man who actually cared about people and especially about children. This book is great and I love the high quality photos and snippets of his CLASSY tweets!

My only complaint is that the words on one of the pages is cut off so I couldn’t read it.
Read more

Amazon Customer
5.0 out of 5 stars So easy to read even a Trump supporter could do it.
Reviewed in the United Kingdom on November 26, 2018
Verified Purchase
Got the book a couple of days back. Whilst it's a far easier read than "Fear" (well, duh!), it's pretty good and brings more than a chuckle at the marmalade Mussolini's expense. The contrast between a working president who understood politics, law & nuance and a golf playing pussy grabbing attention seeking whacko is starkly - and literally - black and white. Be nice if there's a followup sometime.
Read more
7 people found this helpful
Report abuse

robertcrampton
5.0 out of 5 stars Shade: a tale of two Presidents
Reviewed in the United Kingdom on November 3, 2018
Verified Purchase
I have never had a better book than shade. Unlike the present president, Mr Obama always told the truth and what you saw in public he was like in private.
Read more
9 people found this helpful
Report abuse

Ailsa
2.0 out of 5 stars Disappointing
Reviewed in the United Kingdom on April 7, 2020
Verified Purchase
I bought this after reading a positive review elsewhere. I had thought there were equal numbers of photographs throughout, but in fact the pictures are of Obama, next to comments about things Trump has done, or copies of his tweets.
I bought this as a gift, but hesitated to give it in the end, as it’s a little disappointing. Would be better if the author/photographer had sought rights to comparative photographs, as it might be more impactful.
The photographs themselves are good, and the content would perhaps be eye opening to some, but if you are considering buying this book, chances are that there's nothing here that you don’t already know!
Buy a Trump toilet brush instead.
Read more
One person found this helpful
Report abuse

MICHAEL
5.0 out of 5 stars Excellent book
Reviewed in the United Kingdom on May 13, 2020
Verified Purchase
This book shows how American replaced an honourable president with a shallow one with the vocabulary of grade 5 pupil. How did they made this choice?. He captured the two men very well.
Read more
3 people found this helpful
Report abuse

Sarah H.
5.0 out of 5 stars Brilliant book excellent value love it
Reviewed in the United Kingdom on September 12, 2019
Verified Purchase
Another absolutely excellent book Pete Sousa you are amazing. I wanted to write a review somewhere on this book for quite some time and I would highly recommend it
Read more
2 people found this helpful
Report abuse
See all reviews