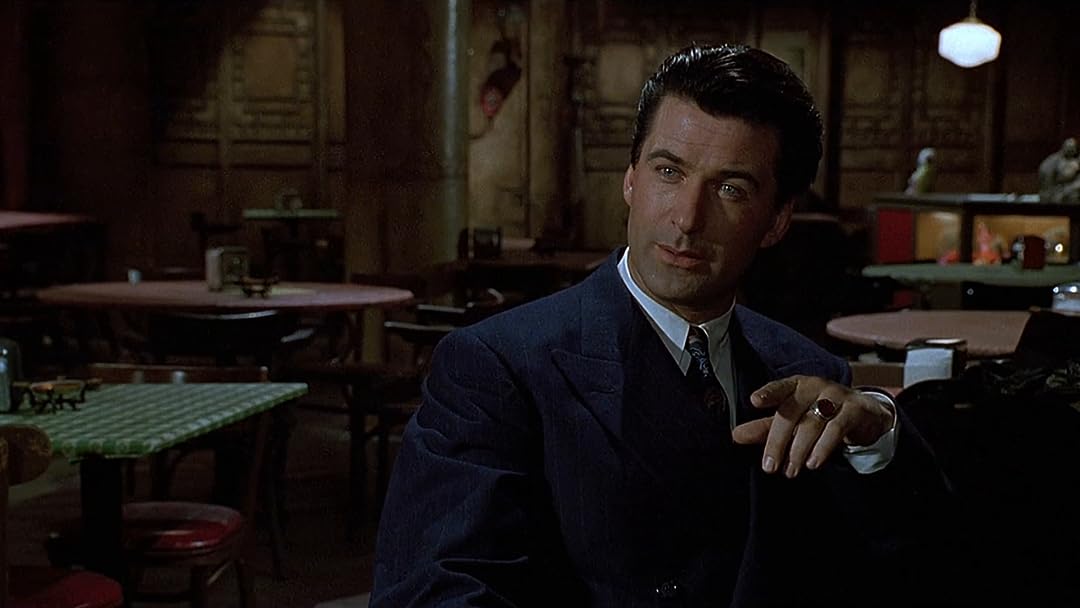 (2,533)6.11 h 48 min1994PG-13
Alec Baldwin stars as the crime-fighting superhero who battles his most dangerous nemesis yet in this thriller with incredible special effects, humor and a dose of the macabre!

traveler77Reviewed in the United States on November 24, 2020
5.0 out of 5 stars
The Shadow Knows!
Verified purchase
Like other 1930s themed box office bombs of the 1990s like The Phantom and The Rocketeer, The Shadow brings unexpected and underrated joy to the audience with an open mind. Again, this film may not be for everyone but don't bash it until you try it. This is a film like those previously mentioned above, that I grew up with. It is a staple of my film collection, not because it's an Oscar winner, not because the story is incredibly fantastic but simply because it's a fun movie with an interesting plot that doesn't take itself too seriously. Alec Baldwin stars as The Shadow/Lamont Cranston. His dark hair, piercing eyes and unique deep voice make him the perfect actor to play this role. John Lone stars as Shi-Wan Khan, the menacing villain who of course plots to take over the world. Penelope Ann Miller is our leading lady, Margo Lane and the great Ian McKellan plays her father, Rhinehardt Lane the physicist who Khan lures to help him with his villainous plans. Also starring is Tim Curry, henchman to Khan and whose performance is often overlooked.

There are many reasons I enjoy this film, the casting, direction, lighting, story and script. There are moments of humor and that is always a plus in a dramatic/action style story. This film while PG-13 is a relatively clean PG-13 and does not have any heavy swearing, sex or overly bloody violence. I certainly appreciate it when filmmakers are classy enough to keep things clean because it makes the film much more enjoyable when you don't have to worry about pressing the skip or mute button. The Shadow is based on the original books and radio show and the art deco style and look of this film is a huge part of its appeal for me. Jerry Goldsmith's eerie score (especially the opening sequence) is unique and original.

Some may call this film "cheesy" or stupid but you'll always have critics. Those who see this film for what it is can definitely appreciate it for its qualities that make it stand out from the mainstream.

thirdtwinReviewed in the United States on August 14, 2017
4.0 out of 5 stars
The BlockBuster That Never Was
Verified purchase
in 2017 the age of the superhero movie this early attempt deserves another look. Dazzling set pieces and backgrounds give a special design and feel to this piece- and even though the film is not altogether successful in its aims Baldwin puts in a game fun performance here and actually seems to sink into the spirit of the character even if the film overall does come off as somewhat campy- it's edgier than Adam Wests Batman for example but similar in its sense of fun. It's a sleeper film worth revisiting- I feel it's aged well because of the set design and game performance of Baldwin as the Shadow and will be better appreciated in 2017 superhero movies are totally mainstream now. If you recognize the Shadows driver he went on much later to play the crabby dad in Everybody Loves Raymond. Fun if nothing else.
22 people found this helpful

I can't find a US DVD release of this that isn't full-screen. The Blu-ray version is widescreen, and I think that alone makes it the version to buy. But, as one reviewer points out, the only Shadow Blu-ray release so far (as of May 2020) is barebones and unrestored, and looks a bit dodgy. But: widescreen.

One of the DVD versions (Canadian?) is listed as 1:85.1 widescreen. Wish I'd noticed before purchasing! Oh well, it's enjoyable in full-screen format. Looks pretty good besides. I'll just wait for a decent Blu-ray release of this uniquely entertaining movie.

BFReviewed in the United States on March 30, 2019
5.0 out of 5 stars
Based on the original Radio Show from the 1930's..
Verified purchase
Yeah, I'm over 60! "The Shadow" started as a radio show back in the 1930's when people sat around on Saturday nights listening to the radio (this is before television kids!!). This movie features Alec Baldwin and a really good cast (you'll be surprised who is in it!!). A simple, nice, fun, fantasy story set in the 1930's. Good period music too. Hope you enjoy it. Try it out on the kids or even your grand-kids.
11 people found this helpful

scifidude79Reviewed in the United States on October 2, 2021
5.0 out of 5 stars
Underrated Radio/Pulp Magazine/Comic Adaptation
Verified purchase
I've always liked this movie and I never understood why it fared so poorly with audiences and critics in the 1990s. The Shadow was incredibly popular on the radio and in pulp magazines back in the 1930s-1950s and has also had later comics to his name. This movie kind of cleans up the various versions of the character into a single story that's both good and a lot of fun. It never takes itself too seriously. There's no world building or setting itself up for a sequel, it's just a nice character piece that holds up well to this day. Alec Baldwin was perfect as Lamont Cranston and the rest of the cast did well also. The setting is brilliant, a highly stylized comic book version of 1930s NYC, with a great film noir atmosphere to it. The movie also has really good but not overdone special effects for its time and has a great musical score by the late great Jerry Goldsmith. The blu-ray is nice, perfect picture and sound for this underrated classic.

R. BollingerReviewed in the United States on April 14, 2018
4.0 out of 5 stars
great movie, but with some problems
Verified purchase
hello all
when i first saw this movie back in 1994 it was great, watching it today in the shadow of the MCU it still is great yet this blu ray has some problems.
First off i loved the story, it is a great story. secondly i loved some of the scenes, the bridge scene is incredible, and some of the ifghts esepcially the fight in the lab are great. so what is the problem you ask. Some of the scens have definite snow on them. now it could be my player but if it were it would be on every scene not just select ones so it must be the blu ray. secondly another problem with this is the villian, in my opinion he tried to hard to be this evil bad guy, against lamont cranstons shadow. Still i like the movie alot and plan on watching it alot, so if you want a good super hero movie get the shadow, and learn how to cloud men minds.
4 people found this helpful

LawrenceReviewed in the United States on July 17, 2020
5.0 out of 5 stars
Can't keep this one in Shadows
Verified purchase
I thought it would follow the same path as the remakes of Dick Tracy and The Green Hornet series cliffhangers of the 30s and 40s. But this time there was respect and sincerity towards making sure that we would be entertained. The casting was very good and it wasn't made to be a stupid comedy.
I just wish someone who redo the remakes and be a little more serious about the classic series. Job well done.
One person found this helpful

Hoju KoolanderReviewed in the United States on April 8, 2008
3.0 out of 5 stars
The Shadow Knows...How to Produce a So-So Blu Ray
Verified purchase
Let me be clear, I love The Shadow! Not just the legendary figure of pulp and radio, but this film in all it's dark, clever, adventurous fun. I saw it in theaters when I was 12, owned the VHS and eventually upgraded to DVD so that a year would never pass that I didn't get a chance to watch it again. That's why I was wanting more from this blu-ray experience.

Like Dick Tracy meets Batman (who The Shadow inspired), this 30's period adventure is a fun, stylized action film that benefits from great performances by Alec Baldwin, Penelope Ann Miller and John Lone. The tone of the film waffles a bit between dark/gritty violence and camp fun, but it always errs on the side of entertainment.

It's true that the film was a box office bomb upon it's release, with not even a cult following that I'm aware of (unless I can be counted as a cult of one). But if Universal is going to release it on blu-ray, why not give us a transfer that doesn't remind us the film was made in 1994? And I won't even tell you how saddened I am by the lack of extras.

Watching this blu-ray was a frustrating experience. The clarity varied wildly from scene to scene, with some darker ones(usually featuring ancient CGI)looking like a blizzard of black ash was taking place in the background. Now maybe this had to do with how the film was originally shot in '94, but it's as if they restored only 50% of the film and said, "eh, good enough".

Now the beautiful dream sequences really do benefit from the blu-ray treatment, but those few minutes are not enough to justify the purchase of this blu-ray. I hate to give this disc a bad review because I so enjoy the film, but I have to remind myself that it's the disc production and not the movie that is getting 3 stars.

Love the film, disappointed by the disc. You're better off just sticking with the DVD where the whole presentation looks slightly fuzzy/grainy, than to be periodically shown what could have been and shaking your head in dismay. The Shadow Knows...this blu-ray isn't worth your time.
19 people found this helpful
See all reviews
Back to top
Get to Know Us
Make Money with Us
Amazon Payment Products
Let Us Help You
EnglishChoose a language for shopping. United StatesChoose a country/region for shopping.
© 1996-2021, Amazon.com, Inc. or its affiliates