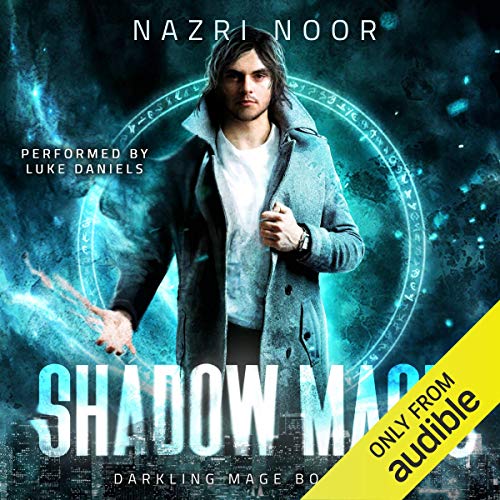 Nazri Noor (Author, Publisher), Luke Daniels (Narrator)
4.4 out of 5 stars 350 ratings
See all formats and editions
Sorry, there was a problem loading this page. Try again.

The gods are dying. But for one man, death is only the beginning.

Murdered as a ritual sacrifice, amateur thief and professional charmer Dustin Graves mysteriously survives, finding himself gifted with strange, dark magic. Then more dead bodies turn up. Some are human, but one is a god of the old world, slain at his own doorstep.

Mortal or divine, the bloodshed must end, and Dust is the mage for the job. But first he must contend with a succubus, a talking sword, a spider queen, a goddess of magic, and eldritch abominations from beyond the stars. No big deal...right?

If you like snarky heroes, snappy dialogue, and a bit of grit and gore, you'll love the first standalone audiobook in Nazri Noor's series of urban fantasy novels. Explore the Darkling Mage universe and discover a taste of Shadow Magic today.

Amazon Customer
5.0 out of 5 stars Just got done with the first book!
Reviewed in the United States on March 20, 2020
Very good! I love the plotline. The main character is very likeable. I listened to the audio and Luke Daniels is a very good narrator. Can't wait to start the next book.
Images in this review

walterhpdx
5.0 out of 5 stars An incredible read
Reviewed in the United States on March 13, 2019
Verified Purchase
I LOVED this book!

I will preface this by saying that I don't usually read Urban Fantasy, nor do I read first person written works. But knowing Nazri's style of writing, I decided to give it a shot. I'm so damned glad that I did!

The way the book unfolds, you cannot help but feel like it's going on around you because of how immersed you get into Dustin's world. Dustin Graves. That gave me a chuckle right there.

Dustin's world was so real, through how Nazri describes it, that you can easily get lost for hours along with the characters. Without giving too much away, there are some parts of the book that have you laughing, while others have you gripping your reader so tight because of the tension. I'm usually a bit jaded, and can usually 'get' the plot twist before it's revealed. But Shadow Magic had me guessing all wrong, and it truthfully shocked me when the truth came out.

This is an amazing book, with vivid, wonderful characters. Definitely a must read!

Amazon Customer
5.0 out of 5 stars unique
Reviewed in the United States on May 21, 2022
Verified Purchase
This book was very interesting, a different take on magic and the ‘hidden world’ that follows it that was enjoyable and refreshing in its uniqueness. I will be reading the next book immediately.
Read more
One person found this helpful
Helpful
Report abuse

Mario V Young
5.0 out of 5 stars You got to to trust in Dustin!
Reviewed in the United States on March 25, 2022
Verified Purchase
I love to read, but lately I’ve been trudging through some pretty bad starters. THANK GOODNESS, for this author, this story. It’s past midnight, I have to work in the morning and I’m still debating starting book 2. It’s a simple read, but well written! The lead is actually lovable and not your usual toxic bro type. He makes me love him and root for him. He feels genuine, and not purposely idiotic or overplayed to tell a story. I love the subtle relationships and the ambiguity of his slight attractions to other characters. It’s just a refreshing series, that puts me at ease like an old Charlaine Harris or Nicole Meeler novel. Please if you love fantasy set in our time, I guess urban fantasy, give it a shot!
Read more
Helpful
Report abuse

Juinji
5.0 out of 5 stars Great read, you want more
Reviewed in the United States on June 7, 2018
Verified Purchase
Great book, it reads very smooth. The story is entertaining and you want to know what will happen to Dustin. There is a bit of a cliffhanger at the end, but with this story, you allready (I do at least) know you want to read more about him. As I understand it, this is a first for this writer - as I could not find any others - so I have to say: WOW, keep it up.
Thank You mr. Noor.
Read more
6 people found this helpful
Helpful
Report abuse

Amazon Customer
5.0 out of 5 stars WOW
Reviewed in the United States on January 6, 2020
Verified Purchase
I was sceptical when I started this book. Then finished the entire series. Initially the writing style felt thin with some of the action a bit contrived. But what urban fantasy series isn't a bit over the top. The entire story is very interesting. The light hearted sarcastic voice from just about every character and adolescent bantering became enjoyable. This book is a solid foundation for the entire series during which I laughed out loud twice, and cried five times. The sex scenes are artistically devoid of details. Thank you for that. The characters are developed where they feel like family, and breathe and change as the story progresses. Some remain 'static charactertures', but that is OK.

The author is very successful in creating a new world that takes you there as a welcomed friend. A wonderful change of pace. Good Job. Dude. Looking forward to more, even though I can read faster than the author can write.
Read more
One person found this helpful
Helpful
Report abuse

Darkdragondee
5.0 out of 5 stars awesome read!
Reviewed in the United States on June 24, 2018
Verified Purchase
this is such an amazing, fresh take on magical worlds. Combining a touch of Lovecraftian influence with a fresh, young, charming shadow walker. Various types of magicians and creatures in a very fun and intense story. Well worth a read! (And the author himself ain't half cute! )
Read more
6 people found this helpful
Helpful
Report abuse

B. Hall
5.0 out of 5 stars Wow!
Reviewed in the United States on June 12, 2021
Verified Purchase
Epic! That’s what I would describe this book as. Nazri Noor has a way with the written word that blew me away. Dustin sure has a lot to learn. His characters were very well written and the storyline was amazing. Highly recommended
Read more
Helpful
Report abuse

Alex
5.0 out of 5 stars A fast-paced, humorous Urban Fantasy with plenty of magic
Reviewed in the United States on February 21, 2022
Verified Purchase
Shadow Magic is a great introduction to the Darkling Mage series. Nazri Noor laces in a lot of intrigue and mystery, along with a few fun twists, to build a fun and immersive supernatural world.

T. K. Elliott
4.0 out of 5 stars A fun start to a new urban fantasy series
Reviewed in the United Kingdom on June 22, 2018
Verified Purchase
About the most interesting and important thing Dustin Graves has ever done in his life is be a human sacrifice in a dark magic ritual. For reasons Dustin doesn't understand (among many other things he doesn't understand), this has activated latent magical powers...

Shadow Magic picks up shortly after this, when Dustin has become part of the Lorica, a sort of magical police/investigative force. Someone is killing gods - how do you kill an immortal, and what did the killer hope to achieve?

What I liked
Dustin is an engaging main character - he's got a sense of humour, and doesn't take himself too seriously. You might want to smack him at times, but you'd probably smile while doing it. :-)

Noor also has some pretty interesting ideas, and has put his own spin on older ideas. It all adds up to a story set-up that has enough that is new and interesting that it seems unlikely that this series will feel interchangeable with everything else out there.

Stuff that could have been better
This is Nazri Noor's first book, and to be fair, it shows a little. The pacing is a little off - not much happens, plot-wise, in the early part of the book - although we get some fairly cool world-building! Plus, Dustin seems to accept things at face value a little too often, especially for a man who got used as ritual sacrifice: you think he'd've learned... And he's just a little too lucky.

However, all that said, it was a fun read. Will I carry on with the series? Yes, I rather think I will. :-)
Read more
2 people found this helpful
Report abuse

Snowy the barn owl
5.0 out of 5 stars Good
Reviewed in the United Kingdom on August 17, 2021
Verified Purchase
This is a new author for me and the first book I have read but won’t be the last . It’s about a man who is killed in a ritual but then comes back to life with special power’s, he has then got to learn from scratch what he can do . All sorts of things happen that keep you reading until the end.
Read more
Report abuse

Gazzmann
5.0 out of 5 stars An interesting start
Reviewed in the United Kingdom on February 22, 2019
Verified Purchase
I had a hard time liking Dustin as he seemed cowardly and stupid at first but started to like him by the end of the book. I will be reading the next book as soon as I finish this review as I've already bought it. I'm wondering where this story will go. Cheers!
Read more
Report abuse

S. Regan
5.0 out of 5 stars Interesting
Reviewed in the United Kingdom on February 17, 2019
Verified Purchase
Good characters interesting plot hated the fact it ended on a cliffhanger want to see what going to happen next
Read more
Report abuse
See all reviews