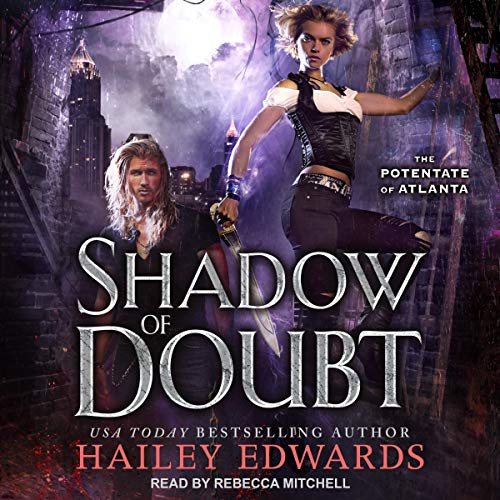 4.6 out of 5 stars
4.6 out of 5
473 global ratings
How are ratings calculated?
To calculate the overall star rating and percentage breakdown by star, we don’t use a simple average. Instead, our system considers things like how recent a review is and if the reviewer bought the item on Amazon. It also analyzes reviews to verify trustworthiness.
Top reviews

LisaG45
3.0 out of 5 stars Fell short of expectation, but I will read the next book in the series
Reviewed in the United States on August 8, 2019
Verified Purchase
2.5 rounded to 3/5 Stars
"Shadow of Doubt" is the first book in 'The Potentate of Atlanta' series, a follow up to 'The Beginners Guide to Necromancy' series which I loved and have read multiple times now. Because I loved the earlier series I expected a lot from this book and sadly it fell short of that expectation- it was only okay to me. I enjoyed seeing the recurring characters and thought that some of the scenes had the same emotional pull and humor that the original series had, but felt that as a whole this new offering was missing the spark, both in regard to the plot and character draw, that made the previous books so good. I'll read the next book in POA series for certain, but I'm not going to commit to more than that at this point. I did not enjoy 'Shadow of Doubt' as much as I did any of the 6 previous 'Beginners Guide' books.
Read more
21 people found this helpful
Helpful
Report abuse

CAGirly5000
4.0 out of 5 stars Good, but not Great (review includes light spoilers for original series)
Reviewed in the United States on September 9, 2019
Verified Purchase
I am a Hailey Edwards fan, and a very big fan of the Beginner's Guide to Necromancy series. However, I wasn't excited about this series as I just couldn't forgive Amelie for her taking advantage of Grier and lying to her repeatedly in the other series. However, I read the book to see where Edwards would take us, and I'm glad I did. And now that I've finished I'm excited to continue with the series.

The Good:
- The writing, as with most Hailey Edwards novels, was excellent.
- The mystery within the story was well done and not predictable,
- Interesting groups in Atlanta that we're introduced too. Their well written and it was fun meeting them.
- The love story is a slow burn, with a Hero that is damaged and will melt your heart when you read his chapters.

The Odd (not really bad, just odd):
- In this book Amelie has taken to a new life as Hadley, so I expected some difference in her tone. But this book read like a completely different character in both the way she spoke to others and the way she acted.
- Hadley repeatedly thinks and says how thankful she is for all the help Linus has given her and how many things he's done to save and protect her. Now I'll admit, I adore Linus, however the issue is that she rarely admits how much Grier helped her. She even brings up her 'trial' and how Linus helped her, but forgot to mention that it was Grier who made sure she wasn't put into a type of slavery. Also, the amount of time she spent thinking about how much Linus had done for her was a bit much. At one point I thought she had a thing for him, and laughed out loud when another character thought the same thing.

Final thoughts are that this was a good read, I enjoyed it and look forward to more. That in itself is saying something. My few annoyances are more with the character herself, and as I've explained I'm biased.

Melanie (PBRU)
VINE VOICE
5.0 out of 5 stars Shadow of Doubt Review
Reviewed in the United States on August 14, 2019
Verified Purchase
Excellent start to the spin-off of The Beginner's Guide to Necromancy series!
But beyond that it stands very well on it's own and even if I hadn't read the other series I still would have really enjoyed this book. Though being a fan I was delighted by the cross over cameos from the characters I've already become familiar with.

It was interesting getting to know "Hadley" on a more personal level and to see her start trying to make up for her past mistakes. It was full of action, humor, a spark of romance, and of course a big bad supernatural murderer. Plus the sneaky twist at the end definitely caught me off guard.
I couldn't ask for anything more and I'm highly anticipating the next book because I can't wait to see where it goes from here.
In my opinion Shadow of Doubt is absolutely recommended.
Read more
2 people found this helpful
Helpful
Report abuse

Anna (Bobs Her Hair)
4.0 out of 5 stars If you loved the Gemini series...
Reviewed in the United States on October 12, 2019
Verified Purchase
"Shadow of Doubt" reminds me of the enjoyment I found in Ms. Edwards' Gemini series, which was a spin-off of another series. SoD has a serial killer, a super-sleuthing heroine with a secret, and a handsome shifter. The Potentate of Atlanta series is wrapped differently. While the goodies inside bear similarities to the Gemini series it also had some new twists to the characters.

SoD is a spin-off of another series. While reading characters are mentioned as if the reader should know them. After research, it turns out that "How to Save an Undead Life" is book 1 of the series that started this necromancer, gwyllgi (similar to wargs), vampire, fae, and human world. It was slightly underwhelming to me so I didn't continue reading the original series. The Potentate of Atlanta, #1 is very enjoyable! The mystery, the detective work, the pacing, the characters are twisty and engaging. I'm looking forward to the next book in this series!
Read more
2 people found this helpful
Helpful
Report abuse

Renee S.
4.0 out of 5 stars Decent first book to the Necromancy spin-off
Reviewed in the United States on August 8, 2019
Verified Purchase
This book picks up after the end of the Necromancy series. Linus, now engaged to Grier, decides to give up his potentate of Atlanta job to stay with Grier. After Amelie’s actions, she’s looking for a new start and decides to take up the vacated position but first must prove herself.

Sporting a new name - Hadley - and a new look thanks to a bit of magic, she’s learning how to do this new job. Overall, she seems to be doing well except for having to deal with Midas who was also in the Necromancy series.

Hadley wants to avoid Midas in case her magic fails to hide her identity because Midas is no fan of Amelie. However, thanks to a case which throws them together and some chemistry that keeps them from walking away from each other, it looks like they are on a collision course to something - that something yet to be determined.

Decent storyline if a bit too conveniently wrapped up at the end. Left plenty of story for future books and while I wasn’t crazy about Hadley’s character in this book, I would read more. Four stars.
Read more
3 people found this helpful
Helpful
Report abuse
See all reviews

serendipity5
5.0 out of 5 stars Wonderful
Reviewed in the United Kingdom on November 14, 2019
Verified Purchase
it's taken me a couple months to get round to reading this book as I am not keen on redemption stories. Some events are just too hard to come back from and I was worried, with this world and characters that I have come to love, that 'Hadley's' story would ruin things for me. However Bailey Edwards has not let us down and I am glad that i did decide to read it, as then I would have missed out on this wonderful story. I did find it very hard in the beginning to associate Hadley with Amelie, they 'felt' different, but then we have never got her POV before. I also wold have liked a bit more information on how she became Hadley but once I got sucked in none of that mattered. Hadley herself is so more complicated than I had previously given her credit and her story is an interesting one. Atlanta, even from Grier's POV intrigued me and I loved the set up of more supernaturals and a livelier and busier life than Savannah. The team that Hadley inherits is also good fun and I hope we get to learn more about them in the future. The gwyllgi of course are fabulous and always shine, with Midas and Ford being wonderful. I can definitely see fireworks in Hadley's future. She did however prove herself to be a worthy heroine and and I look forward to her future story.
Read more
One person found this helpful
Report abuse

L. R. Vaughan
5.0 out of 5 stars Brilliant start to a lead-on series
Reviewed in the United Kingdom on December 31, 2019
Verified Purchase
This book moves on from the Undead books by the same author and is just as good (even if I miss reading about Grier). Really enjoyed the book and cannot wait for the next one.
Read more
One person found this helpful
Report abuse

I feel like the back story has been re-written a little. Amelia (now Hadley) didn’t have an awesome life growing up, but this makes it seem even harder, more abuse.

Liking the triangle of Hadley, Midas and Ford.

C. Nadeau
3.0 out of 5 stars Not on par with the “How to...” series
Reviewed in Canada on August 8, 2019
Verified Purchase
I wanted to love it, I do. Not taking into account that Hadley was despicable in her old life and is difficult to like because of what she did to Grier, the story is missing subtext. I mean there is a lot of conversations, which I liked, but there is not enough information, feelings and explanations for some interactions. Plus I had to reread some scenes many times in order to understand how we got there and what was happening.
I would have given 2 ½ stars. I’m not sure I will buy the next one.
Read more
Report abuse
See all reviews
Back to top
Get to Know Us
Make Money with Us
Amazon Payment Products
Let Us Help You
EnglishChoose a language for shopping. United StatesChoose a country/region for shopping.
© 1996-2021, Amazon.com, Inc. or its affiliates