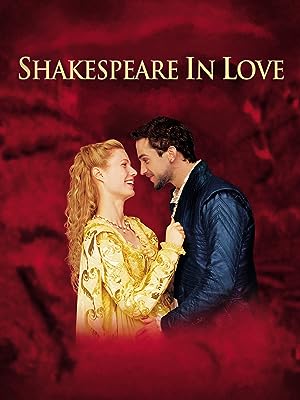 (3,309)
7.12 h 3 min199916+
Playwright William Shakespeare is young, out of ideas, and short of cash, until he meets his ideal woman and is inspired to write one of his most famous plays.

Lorraine J HirshfeldReviewed in the United States on July 4, 2022
5.0 out of 5 stars
Shakespeare in Love….Just not enough stars to press
Verified purchase
I have a long admired the English for the incredible talent they bring to both theater and the movie screen. This movie in particular I found to be pristine in all aspects of move making. The writing is genius, the comedic timing is excellent and I love The Queen’s English language, which is art itself. This contemporary take where his story is a backdrop to the parallel main story is refreshing. While I’m not a fan of Gwyneth Paltrow, she did a great job with her character. Joseph Fiennes has such a talented acting range and Geoffrey Rush is an outstanding character actor. Collin Firth plays a perfect combination of a spoiled, entitled loser and absolute coward, which made his character both despicable and laughable at the same time. So this was a wonderfully cast movie .

P. R. RowlinsonReviewed in the United States on June 1, 2022
5.0 out of 5 stars
A masterful script perfectly performed!
Verified purchase
One of my most favourite films ever since it was first released, and I still am moved each time I watch it. The writing is exceptional with a play set within a play as the basis of the story, but more than this, the dialogue is clever, witty and with lesser actors would carry this film to brilliance. the actors though today some of the best known names in the profession, and so this coupling elevates this film to what I believe is one of the best ever made. We are so used to high budget action movies, special effects and CGI that these have become the yardstick by how we measure the success of a film. In my opinion; powerful writing perfectly performed can leave us equally breathless, and I suspect will never lose its impact.
One person found this helpful

joel wingReviewed in the United States on December 29, 2020
4.0 out of 5 stars
2 people that can never be together give inspiration to Romeo & Juliet
Verified purchase
William Shakespeare (Joseph Fiennes) is struggling with writers block. He goes to a psychologist who suggests that his problem is that he lacks romance in his life. Then he meets a young actor Mr. Kent that captures his imagination with his skills and then sees Viola de Lesseps (Gwyneth Paltrow) and falls in love with her not knowing that they are one in the same. Viola is enthralled with Shakespeare’s words while having to deal with her parents who have married her off to Lord Wessex (Colin Firth) of Virginia. The story is obviously about whether Will and Viola can find love given their situations.

Romeo and Juliet is the backdrop to the affair between Shakespeare and Lesseps. On the stage the actors rehearse the scenes and slowly but surely realize how special the play is. Off stage, Will and Viola struggle with their situations which gives inspiration to the play. It’s a great piece of writing to intertwine the two stories together, and a very special experience to watch.
C

E. J.Reviewed in the United States on October 5, 2012
5.0 out of 5 stars
I Love This Movie!
Verified purchase
I am a film buff in general. There are hundreds of movies that I have really enjoyed and seen multiple times over the years. I could probably easily list several hundred that I would claim as favorites. Two of my top favorites are Romeo And Juliet" and "West Side Story" When I was a young kid I fell in love with Natalie Wood in "West Side Story". When I was a high school senior, the Franco Zefferelli version of "Romeo and Juliet" was released and over the next several months I took everyone, girls I was dating, family, friends - anyone I could talk into going, I took them to see that film because I wanted to give everyone I knew the gift of falling in love with that film as I had. Back then, once a movie's run was over, it didn't come back out for years and there were no VHS tapes or DVDs so I actually bought a four album set of the complete audio soundtrack of the film and listened to it over and over. It was quite a source of amusement for my family.

So "Shakespeare In Love" was a perfect film for a more mature, grown up me thirty years plus after "Romeo And Juliet" It is so brilliantly written and the acting is superb. I think Mr Shakespeare would have been thrilled with this story of love and comedy. The artistic team does an incredible job of creating a world that seems so genuine and authentic. For me, I felt transported back to that time and place. It was probably as close as I'll ever get to having a sense of what those times and some of the people were actually like. And it's a riveting story with a first class cast. It's one of those few films where, toward the end, I started sneaking looks at my watch because I didn't want it to end. Definitely one of my top 5 or 10 all time favorites!

JasmineReviewed in the United States on May 24, 2022
5.0 out of 5 stars
Love
Verified purchase
Love this movie! Such a classic

PhredReviewed in the United States on April 1, 2013
5.0 out of 5 stars
Romance!Action!, Comedy! and a bit with a dog! (anna a tad of poetry)
Verified purchase
One of the reasons to love Shakespeare is a love for wordplay. Tom Stoppard is one of the best practitioners of wordplay in contemporary theater. Bringing both together in a comedic movie was a great idea.
The conceits that underlies Shakespeare in Love, is that Victorian England is much like today though perhaps with more mud, and that Shakespeare as a not yet recognized genius is poor, insecure, and dependent on the love of a woman for inspiration. Okay the writer specifies horny as another of young Shakespeare's defining characteristics.

The plot builds around Shakespeare (Joseph Fiennes) seeking the romantic inspiration that will allow him to convert Romeo and Ethel the Pirate's Daughter into what will become Romeo and Juliet. Inspiration comes in the form of the poetry and theater loving innocent Gwenyth Paltrow (Viola). Her desires, in no particular order, are to love Shakespeare's poetry, act in one of his plays and avoid the titled husband (Lord Wessex played by Colin Firth) who has been bought for her by her father.

This movie is built upon some of the best lines from Shakespeare, a variety of comic asides, word games and cross references. Lifting it above merely brilliant use of language is the fact that the supporting cast is superior. Cast members from the young Joe Roberts (the rat catching boy will become the playwright John Webster) to Dame Judy Dench, who will win an Academy award for her portrayal of Queen Elizabeth take turns commanding their respective scenes rather than merely supporting.
Shakespeare in Love is one of my all-time favorites. In fairness to those with young children and their own sensitivities there is perhaps a little more of Ms. Paltrow exposed than some viewers might approve. Other than this barest of cautions, this is an entertaining movie built on language, stage action, romance, comedy, and a bit with the dog.
3 people found this helpful

D. RobertsReviewed in the United States on March 2, 2001
5.0 out of 5 stars
Unbelievable!
Verified purchase
That a film this incredibly profound and brilliant could come out of the lowest-common-denominator-driven politics of Hollywood filmmaking is nearly beyond belief. However, I'm certainly not going to complain about it.
The movie centers around a historical period of Shakespeare's life (the episode in which he is writing "Romeo And Juliet"). The film includes many historical personages, such as the famous poet Christopher Marlowe and the stage actors Ned Alleyn and Richard Burbage [one of the most popular Shakespeare actors of all time]. The inclusion of Judi Dench (arguably the most famous Shakespeare actresses alive) as Queen Elizabeth was pure genius.
The plot of the movie focuses on a love affair between Shakespeare and a fictional women (played by Gwyneth Paltrow) who turns out to be the perfect muse for S' writer's block. The inquiry into what is the impetus for the creative output of the artist is fascinating. In many ways, the movie reminds me of Thomas Mann's "Lotte In Weimer"; in his novel, it is Goethe's talents which get put "under the microscope."
What makes this movie truly outstanding is that it's so well done. It has the tone of a Shakespearian comedy - an utterly brilliant touch. This movie could have so easily been a sham if left in the hands of a less capable director and inferior actors. Paltrow's performance, in particular, really makes this movie sing. The soundtrack gives the pace of the film a nice flow.
Here is the type of tasteful movie that the cultured among us have been waiting for for so long. Another movie like this won't come out for at least another 10 years. The DVD also contains mini-biographies of the historical figures portrayed in the movie. All in all, a can't miss.
3 people found this helpful

Amazon CustomerReviewed in the United States on August 31, 2005
5.0 out of 5 stars
Great re-imagining of Romeo and Juliet
Verified purchase
Madden's _Shakespeare in Love_ was written by Marc Norman and Tom Stoppard. Stoppard wrote (and directed the film version of) _Rosencrantz and Guildenstern Are Dead_. While that film appeals to a more intellectual or philosophical audiences (as it's based on a re-imagining of _Hamlet_, told from the perspective of two minor characters), this film plays the same "trick," but appeals more to the romance evoked by its subject matter of _Romeo and Juliet_.

It would definitely help to be familiar with both Romeo and Juliet and Shakespeare's subsequent play, Twelfth Night, as the plot of _Shakespeare in Love_ weaves in and out of the characters and themes of those two plays. It's less of an intersection with those plays and more of a "behind-the-scenes" of the writing of those two plays. It cleverly takes Romeo and Juliet's focus on a love restricted by circumstance and puts it into the context of the Bard's own life.

The film does make one wonder about the historical veracity of the events depicted, yet the DVD extras don't seem to delve into that kind of investigation; perhaps our general lack of knowledge of the Bard's life is the real reason for these unanswered questions, but it would be nice to receive some sense of the "reality" of the events depicted in the film, without having to engage in a scholarly enterprise. Regardless of "truth," however, the film is wonderfully creative and intelligent.

Both in the theater and on DVD I felt this film lacked something, and one's love for Shakespeare does help during the times that the plot meanders about, but it doesn't affect it enough to make me drop it to four stars. On the whole, this film is remarkably creative, intelligent, and romantic!
See all reviews
Back to top
Get to Know Us
Make Money with Us
Amazon Payment Products
Let Us Help You
EnglishChoose a language for shopping. United StatesChoose a country/region for shopping.
© 1996-2022, Amazon.com, Inc. or its affiliates