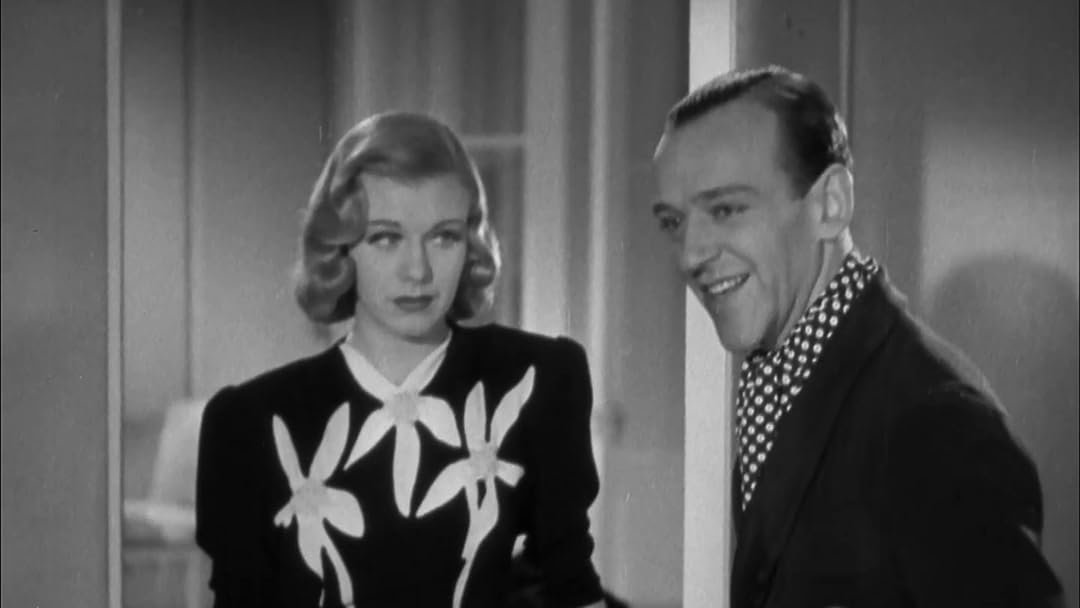 Bob W.Reviewed in the United States on September 22, 2021
5.0 out of 5 stars
Overlooked classic
Verified purchase
While Top Hat and Swing Time get most of the attention in the Astaire/Rogers canon, Shall We Dance provides some of their best numbers. This is the last of their films with music by the Gershwin brothers as George was already beginning to show signs of the illness that would claim him. In this film we get Astaire's magnificent dance to Slap That Bass with the rhythm and the images of the ships engines behind him, the two of them dancing on roller skates to Let's Call The Whole Thing Off, Astaire singing They Can't Take That Away From Me to Ginger and one of their greatest numbers where Ginger sings They All Laughed as they dance a terrific routine where Astaire finishes by tossing Ginger on to a piano and he joins her there on the last note. Yes the usual basic plot of mistaken identities, used again and again in their movies, looks silly now but you don't watch Fred and Ginger for the plot. You watch for the magnificent singing and dancing. Shall We Dance provides both and should be part of every Astaire and Rogers collection.

Bobby UnderwoodReviewed in the United States on September 3, 2005
5.0 out of 5 stars
"They Can't Take That Away From Me"
Verified purchase
The beloved "Shall We Dance" was the only Fred and Ginger film with songs from George and Ira Gershwin, and they were splendid. Songs like "They Can't Take That Away From Me" made for great entertainment when coupled with the opulent RKO sets in this Pandro S. Berman production. The lively tale of mix-ups and misunderstandings was from a screenplay by Allan Scott and Ernest Pagno, based on an adaptation by P.J. Wolfson of a story by Lee Loeb and Harold Buchman. Ginger's gowns by Irene were fabulous as always and Mark Sandrich once again took the helm.

On his stay in Paris, Pete (Fred Astaire), a famous ballet dancer also known as Petrov, wants to meet musical comedy star Linda Keene (Ginger Rogers), and in fact, would like to marry her! Pete and his pal Jeffrey (Edward Everett Horton) discover she's sailing on the S.S. Queen Anne and follow her. Pete uses a fake accent for a short time but is eventually found out, and finds out that dogs are the way to a girl's heart.

A wild story Jeffery told Lady Tarrington (Ketti Gallian) in Paris comes back to haunt Pete, as suddenly everyone on the cruise thinks he and Linda have been secretly married, and are going to have a baby! It's a bit much for Linda, who has sworn off reporters, and they decide to really get married, so they can get divorced. But it's too late for Linda, as she has fallen in love with the pursuing Pete, and there is a sadness as Pete sings "They Can't Take That Away From Me" on a ferry to Manhattan after it's all done. The tune was nominated as Best Song but lost the Oscar to "Sweet Leilani" from "Waikiki Wedding."

Hilarious moments in the film include Edward Everett Horton and Eric Blore in a "hushing" duel with ballet patrons, Horton and Jerome Cowan getting tight, with Horton getting ill afterward, and Fred convincing Horton that he's seasick, even though the water is perfectly calm. Blore ends up in jail for the second time in one of the couple's pictures and is once again a riot.

Ginger sings "They All Laughed" and she and Fred share a lovely dance that culminates with a smile, as the couple sit on a piano. A fun and famous scene has them on skates in the park, dancing to "Let's Call the Whole Thing Off." Fred's character Pete wants to dance with Linda all his life, but what's he to do when she won't consider it? Dance with images of her, that's what. A charming conclusion has Linda joining the other girls, but Pete can't figure out which is the real Linda. Will Linda say yes to Pete? If you are a fan of Fred Astaire and Ginger Rogers you know the answer to that one!

Devoted fans of one of the most fondly remembered couples in screen history might be shocked to learn that during production, there were plans for this to be their final film. "Swing Time," their previous entry, now widely regarded by film historians, along with "Top Hat," as the zenith of their films together, had done huge box office business in large cities upon its initial release. But that business had quickly subsided and there were those at RKO who felt they had gone to the well once too often.

Fortunately for us, that theory was squashed, and we got to see the hilarious "Carefree" and the tender "The Story of Vernon and Irene Castle" before the couple said farewell. Again, fortunately, we don't have to say farewell, only "see you later," because we now have the ability to watch these wonderful films at home whenever we want. "Shall We Dance" is a charming reminder of a magic that passed this way only once, and something you'll want to capture forever by picking up a copy today.

Brian StevensReviewed in the United States on July 16, 2021
4.0 out of 5 stars
Fred Astaire, youv'e done it again
Verified purchase
This is the Seventh Fred Astaire Vintage Movie I have acquired in recent weeks exclusively for Home Viewing..I recall seeing many of his Titles on the Big Screen when I was young.A friend introduced me to his " Easter Parade" Movie recently.Need I say more? My admiration for Fred and his fabulous Talent was re-kindled at the age of 85 yrs.I found this Movie right up there with his better outings.Great Dancing with the Music and Lyrics by George and Ira Gershwin.If ya love Dancing, ya gotta love him!!

samanthaReviewed in the United States on December 28, 2020
1.0 out of 5 stars
Thumbs all the way down....
Verified purchase
Despite great dancing by Astaire and Roger's beauty, this was one of the stupidest, lamest films I've seen in a while. boring....Boring....BORING!!!

OntCheeReviewed in the United States on November 1, 2019
5.0 out of 5 stars
Why Not?
Verified purchase
Got this one actually for the comedy of the secondary players rather than the dancing; Eric Blore kills it. Recommend!

Michael RyanReviewed in the United States on March 3, 2021
5.0 out of 5 stars
Great dance scenes with Fred & Ginger
Verified purchase
Classic 30's movie done during the depression, intended to give people an escape, at least for awhile

Barbara AmellReviewed in the United States on February 26, 2014
5.0 out of 5 stars
Excellent Gershwin Film
Verified purchase
This movie features one of the finest scores ever written for a film, by the great George Gershwin, with lyrics for the songs by his brother Ira. George Gershwin was the first to score an entire picture with 'Shall We Dance'; he provided all the background music, ranging from ballet to swing numbers, even a small ensemble piece for walking a dog. Fred Astaire's amazing solos and his pairings with Ginger Rogers are all classic dance numbers. The DVD extras include a delightful documentary on the music for the film, and an informative commentary.
4 people found this helpful

Debra S.Reviewed in the United States on December 5, 2019
5.0 out of 5 stars
Great Music!
Verified purchase
I love this movie as it has so many wonderful songs. Fred Astaire and Ginger Rodgers together make a great movie too. It is one of my favorites.
See all reviews
Back to top
Get to Know Us
Make Money with Us
Amazon Payment Products
Let Us Help You
EnglishChoose a language for shopping. United StatesChoose a country/region for shopping.
© 1996-2021, Amazon.com, Inc. or its affiliates