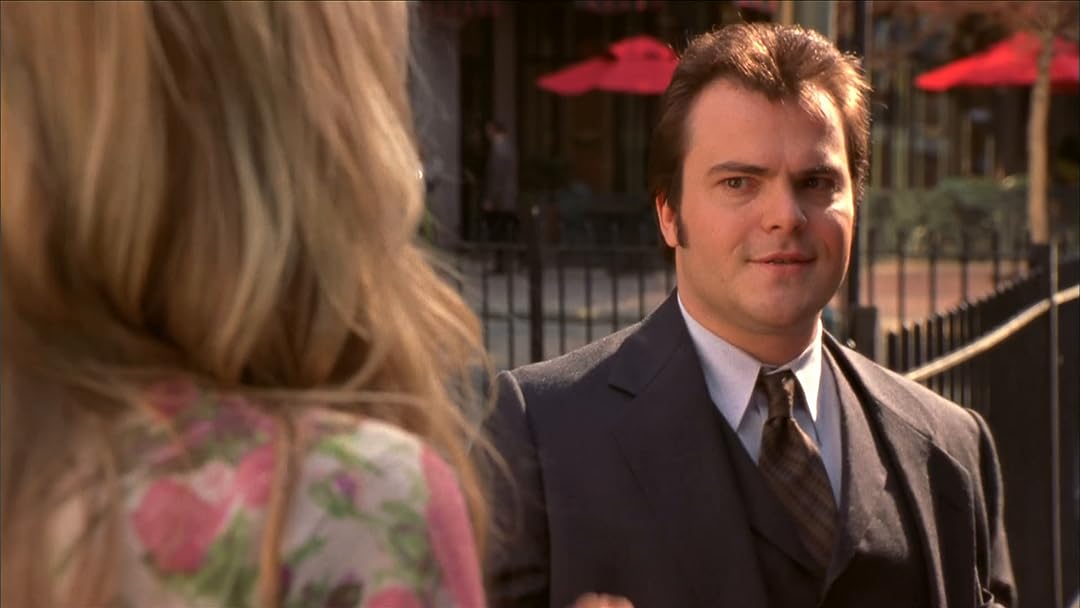 joel wingReviewed in the United States on June 19, 2020
4.0 out of 5 stars
Hal is taught life lesson about not being superficial
Verified purchase
When Hal’s dad was dying he told his son to be superficial. Don’t marry for love, marry for someone that looks good. He told him look for someone that had a good body and God would be happy with him. Hal wanted to make his dad happy and based his life around his words. That’s the basis of Shallow Hal, which was about him learning a lesson and changing his worldview. The story is about not basing people off of looks. This is a surprising theme because the movie was by the Farrelly brothers who were known for their crude humor.

Instead of going raunchy like the Farrellys usually did they were far more light hearted as this was a romantic comedy. For example they played on the opposites that Hal and his friend Mauricio (Jason Alexander) would see in women. It worked overall as this was a very funny love story with a message.
C

SeanReviewed in the United States on February 18, 2021
2.0 out of 5 stars
A little funny with a lot of cringe
Verified purchase
I can't believe this movie is 20 years old! I remember seeing it in theatres as a high school freshman. It hasn't aged all that well and has all the typical goofs and gags you'd expect from a Farrelly Brothers movie, just not as funny. The subject matter of the movie can be a little uncomfortable if you are watching with people on the heavy side, especially women. The laughs are few and far between but Jason Alexander is somewhat entertaining as he is basically replaying his superficial personality from Seinfeld. Overall a just okay movie that's worth just one viewing.
One person found this helpful

noavjoeReviewed in the United States on February 19, 2018
5.0 out of 5 stars
Funniest movie ever!
Verified purchase
I've seen this movie at least 5 times and still laugh my ass off every time. I was thoroughly entertained throughout the movie and love that Tony Robbins was in this movie. If you want a feel good movie and need some levity in your life I would highly recommend this movie.
9 people found this helpful

Jack Black plays Hal Larson, a completely shallow individual who judges women solely on their appearances, even though Hal isn't what most would consider an attractive man. This precludes him from developing any meaningful relationships in his life, but given him and his friend's Mauricio (Jason Alexander) views towards women in general, they garner little sympathy from the viewer. A chance meeting with television self help guru Tony Robbins changes this for Hal. After a lengthy discussion in a stalled elevator, Tony Robbins decides to give Hal a gift, allowing Hal to only see the inner beauty of not only women, but people in general. This causes Hal to see women who may not be considered physically attractive to most appear to be the most beautiful women in the world, given that they have inner beauty. This new view on women, or beer goggle laser surgery, as Mauricio puts it, allows Hal to meet Rosemary (Gwyneth Paltrow), the most beautiful woman he has ever seen, and who also happens to be the daughter of his boss. Hal is instantly smitten with Rosemary, even though in reality, she is profoundly obese. Eventually Mauricio discovers what happened to his friend, and convinces Tony Robbins to tell him how to bring back the 'old' Hal. Does Hal, who now can see Rosemary as she really is, revert back to his old ways or accept that beauty is in the eye of the beholder?

Jack Black is truly funny in this movie, but I think Jason Alexander almost outdoes him in basically bring the role of George from the television show Senfield to the film, tweaking it a little bit to make him so completely hollow in character. Paltrow also performs very well, despite her having to wear a suit that makes her appear a couple of hundred pounds heavier than in reality. The Farrelly Brother succeed again in bringing humor to subject matter most probably wouldn't touch, and allowing us not an opportunity to laugh at obesity, but to laugh at the superficialities many of us have, conditioned into us through the various forms of media we ingest on a daily basis. This movie, while maybe not as funny as There's Something About Mary (1998) or Dumb and Dumber (1994), is a bit more touching and that served to balance the story out nicely.

Presented here is a wide screen anamorphic print, with quite a bit of extra features like deleted scenes, featurettes, a music video by Shelby Lyne, and commentary by the Farrelly Brothers. I'll leave you with a couple of my favorite lines from the movie involving Mauricio (Jason Alexander) and Tony Robbins debating Hal's new perspective...

Mauricio: The thing is all the women he's been seeing are ugly.
Tony Robbins: Who says they're ugly?
Mauricio: Bausch & Lomb.

Tony Robbins: Haven't you ever heard that beauty is in the eye of the beholder?
Mauricio: Have you heard the song "Who Let The Dogs Out"?

Brittney ChampReviewed in the United States on September 24, 2021
5.0 out of 5 stars
Love
Verified purchase
First of all, I love Jack Black. So. Much. I'm a plus-size queen and sitting through the beginning of this movie I was so scared, but I thought surely Jack Black wouldn't do this to me. So I waited, I laughed and by the end my heart was full of joy. Very fun and very heartwarming.

Vinny CarpenterReviewed in the United States on April 21, 2003
5.0 out of 5 stars
Really funny romantic comedy that is a must for your library
Verified purchase
The Farrelly brothers have done it again. After creating cinematic jewels like 'Something about Mary' and 'Dumb and Dumber', they've created a truly incredible romantic sweet comedy that will have you laughing through the whole money.
This money stars Jack Black, Gwyneth Paltrow and Jason Alexander among a great ensemble cast that really makes this movie. The movie is about Hal Larson played by Jack Black and his quest to find the perfect woman. I love Hal's description of the perfect woman that includes parts of Michelle Pieffer, Britney Spears, Paulina, Heidi Klum, Rebecca Romain and many other. There is also a great cameo from Banana Hands aka. Tony Robbins in this movie. Basically Hal gets stuck in the elevator with Tony Robbins who hypnotizes Hal to only see the inner beauty of the women he meets and this leads to him falling in love with Rosemary, incredibly played by Gwyneth Paltrow. Hal sees Rosemary as a drop-dead gorgeous blonde who weighs about 110 lbs. In reality Rosemary is a huge woman in the 350+ lbs range. You can just imagine the comedy writing itself as this movie unfolds.
Another great thing about this movie is the soundtrack. There are some great songs from Sheryl Crow, Shelby Lynne, Phoenix, Cake among others. I just love the song 'Too Young' by Phoenix in the movie, but you won't see if in the soundtrack if you buy the CD.
My wife and I just love this movie and we've watched it over 20 times since we got the DVD. We just don't seem to get tired of this movie. This is a must for your DVD library.
2 people found this helpful

MarthacatgirlReviewed in the United States on February 18, 2003
5.0 out of 5 stars
A Touching, Sensitive, Yet Very Funny Movie
Verified purchase
Shallow Hal is one of my favorite movies of all time. It is about a not-so-good-looking guy who only wants to date beautiful women. Then he is hypnotized by guru Tony Robbins so that he only sees people's inner beauty when he looks at them. Fat and ugly girls who are beautiful inside look beautiful on the outside to Hal. Soon he meets Rosemary, a sweet but extra large woman whom he thinks is thin and gorgeous. What results is hilarious but touching at the same time. Jack Black and Gwyneth Paltrow deliver stunning performances. Gwyneth is especially effective playing both the skinny Rosemary and the fat Rosemary. Surprisingly, we don't feel surprised when we see the fat Rosemary after being used to the skinny Rosemary, because she's still the same person. If I had to pick a weakness to this movie, it would be Jason Alexander as Hal's best friend. His character is so obnoxious.
The story has a very happy and satisfying ending. In addition to being a very funny movie, there is also a valuable lesson to be learned from it--don't judge people by the way they look. That is unfortunately something people tend to do in real life, so we could all take a lesson from this movie.
I give it thumbs up!
2 people found this helpful