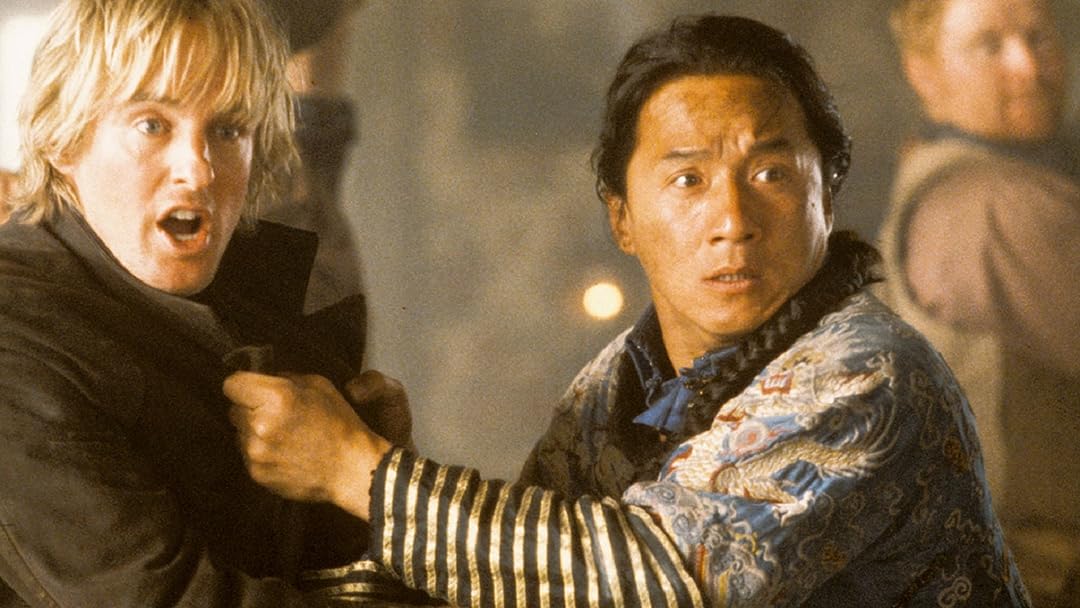 Thinker3Reviewed in the United States on April 30, 2020
4.0 out of 5 stars
Cultural Appropriation
Verified purchase
This is a Jackie Chan movie. Don't expect deep meditations on t he frailty of human existence. There's plenty of action as Jackie battles against the odds to save the princess--lots of great choreographed fight scenes. He teams up with wild west bandit Owen Wilson and the Sioux Indians. This film was done at a time when cultures could still meet, clash, and overcome their differences. Today, the project would likely be rejected because there are too many cultural stereotypes. So sit back and enjoy the fun while the film is still available. Owen Wilson is supposed to be very witty here, especially in the buddy scenes with Jackie Chan, but I thought they dragged. The real hero is the unnamed Indian wife.
14 people found this helpful

joel wingReviewed in the United States on February 3, 2021
3.0 out of 5 stars
Good light hearted buddy comedy in the Old West
Verified purchase
This was another buddy film featuring Jackie Chan with an American this time Owen Wilson. The movie is set in the Old West where Chan and Wilson are out to rescue a kidnapped Chinese princess played by Lucy Liu. Chan played the straight guy dong the action sequences while Wilson handled the jokes. The idea was Chan needed an American counterpart like Chris Tucker in the Rush Hour series because it was believed Chan’s Chinese accent was too thick to carry an entire American picture on this own.

The movie deals with traditional Western tropes. Thus Chan runs into outlaws and gets adopted by a Native American tribe. The action sequences are good but nothing special. The comedy is light hearted. It’s fun overall.

CherryMReviewed in the United States on March 7, 2021
5.0 out of 5 stars
I miss these kind of movies!
Verified purchase
Honestly, if you don't give it 5 stars I really wonder what more do you want or expect from movies like this. It's a good script, it's wall to wall great choreography (much of it comical). It's fun and lighthearted and keeps you watching. If you're not familiar with Jackie Chan and liked this.. go watch all his other movies. He always makes fun blockbusters like this.
7 people found this helpful

NazeliReviewed in the United States on March 19, 2021
5.0 out of 5 stars
Good Cowboy +action+comedy in One
Verified purchase
This movie with Jackie Chan and Owen Wilson works well with martial art's man meets the chilled cowboy/bandit/lady's man, plus they got Native Americans with their pipes and a skillful Native Girl coming to rescue all the time, and a saloon brawl to add to the fun. Not to mention Lucy Leu in nice Chinese traditional costume. What's there not to like! It got everything mixed together, and somehow it all works.. Easy movie to watch! I have seen it numerous times, and my favorite seen is the drinking game with "uno mas" said through the bubble. Go figure, it is a good classic.
4 people found this helpful

Western ShadowsReviewed in the United States on April 30, 2019
3.0 out of 5 stars
Funny but unnecessary language
Verified purchase
One of those movies you remembered to be so funny but are embarrassed now that you show your friends because the language is unnecessarily raunchy. Lighthearted and silly humor that teenagers giggle at but peppered with words you don't want them repeating.
7 people found this helpful

Milagro AlvaradoReviewed in the United States on February 25, 2021
1.0 out of 5 stars
Dumb, not funny, disrespect to culture and faith
Verified purchase
I would prefer to give negative 100 stars to this movie, but Amazon won't let me do that. This movie is dumb, and just drags on and gets worse and worse as you watch. I was waiting for a funny scene and just stopped watching. Very disrespectful to Native American Culture and misrepresents the culture. Jackie Chan smokes a peace pipe with the Narive American, and the sound effect is thaty of a water bong. They then break into coughing and laughin (because the idea is that they're smoking pot), and he wakes up Married to the Chief's Daughter who he does not want. She then follows him and saves him several times in the movie. Several times it feels like he just leaves her behind and somehow she always finds him just in time to save him. While it also seems that the Owen Wilsom Character is trying to pick up on the girl. Very Disrespectful to the Native American Culture and to the Native Female. Instead of funny it's just a crude attempt at humor. Also very disrespectful to the Christian Faith, particularly the shoot out and fight scene at the Church where it seems they thought it would be funny to shoot up and break all the figures of saints and of the Baby Jesus. I didn't watch anything else after that because it just kept getting worse. I would not recommend this movie to anyone or any Jackie Chan or Owen Wilson Movie after watching this!
2 people found this helpful

Should we have a plot? I mean... do we need one? Oh, we do. Let's make it some sort of Western, while adding stereotypes of anyone we can think of. And a quasi-stoned cowboy sidekick.

Will that be a problem? No, because Jackie Chan.

Amazon glitched partway through this movie and stopped playing it. I'm strangely ok with that and won't bother going back to see how it finishes.

GSD MOMReviewed in the United States on November 19, 2021
3.0 out of 5 stars
Great fun from the past
Verified purchase
This is a great Jackie Chan western buddy movie. It's a comedy and the people commenting who like to take offence at cultural humour should use some discernment. Watch the movie. Every ethnic group in this film has their share of heroes, villains and comic relief. The horse has more sense than a lot of the human beings and reminds me of the horse in Cat Ballou. In this film, courage is rewarded in the strangest of ways. Friendship grows between the most unlikely persons. Who you are shouldn't be dictated by class or race. The guard thought least worthy saved the princess. The princess grew into an admirable woman. Either don't take the film seriously and have a good laugh or ponder that there's a message buried in it.
See all reviews
Back to top
Get to Know Us
Make Money with Us
Amazon Payment Products
Let Us Help You
EnglishChoose a language for shopping. United StatesChoose a country/region for shopping.
© 1996-2022, Amazon.com, Inc. or its affiliates