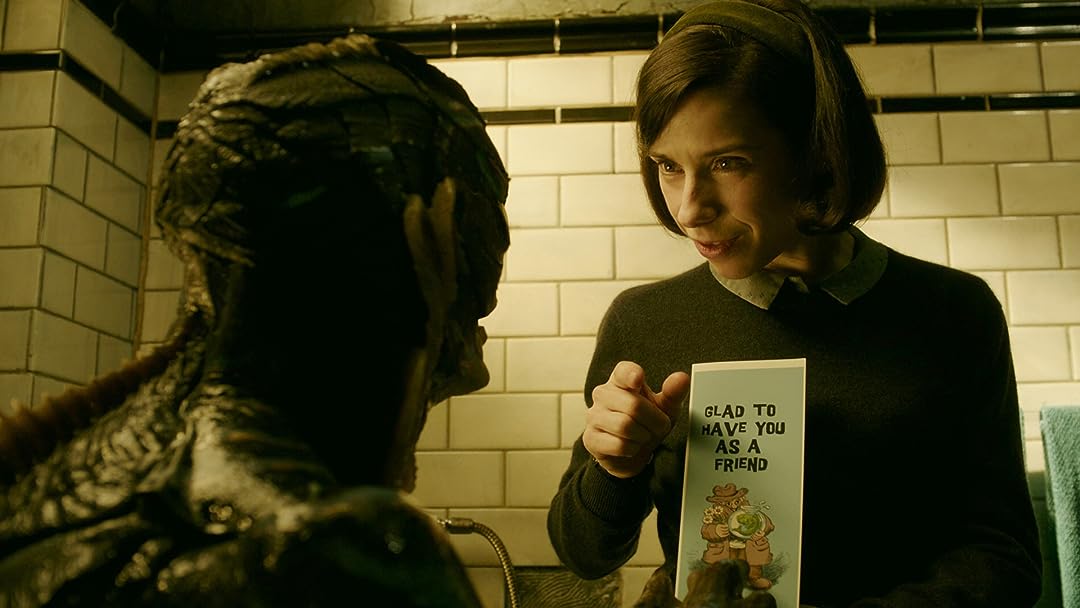 The Shape of Water

(5,616)
2 h 3 min2017X-RayHDRUHDR
From master storyteller Guillermo del Toro comes an otherworldly fairy tale set in 1960s America where a woman's life is changed forever after she discovers a secret experiment.

AmazonianReviewed in the United States on December 23, 2018
1.0 out of 5 stars
In one word, grotesque
Verified purchase
This is by far one of the most ridiculous, boring, presumptuous, film I have seen in a long time. Basically its like watching Amelie, set in a roger rabbit lab, with caricatures of characters. The film is patronizing, there are many political themes poorly transplanted into the main theme. The love affair is not believable but just plain creepy. To like this you must either lack critical sense or would need to be ignorant of the last 30 years of movie production, unless the motive in watching is to make a stereotypical dumbed down political statement about "progressive" ideas, which oddly feels misplaced even. The pace is terrible. The art direction and film score is a plain copy (but poorly executed) of Amelie. To my opinion, there may have been a good idea at the start, but it ends up being an overrated, grotesque movie, that tries to mix together tons of classics dressed up as an art avant-garde original film. It's not original, but obviously Hollywood like to reward thievery and intellectual laziness.
138 people found this helpful

RavenReviewed in the United States on November 22, 2018
1.0 out of 5 stars
Cat Owners and Patriots will Hate this Movie
Verified purchase
Parents, Cat lovers BEWARE
Not-so-covert political indictment against Conservative America but a SJW commentary.
Spoiler: the cat the swamp monster eats half way the movie, a shocking bloody scene, is a deal breaker for cat lovers worldwide. A cheap inexcusable trick to jump start an otherwise boring script.
NOT a movie for children under 17, not a movie for anyone of any age.

Tony R.Reviewed in the United States on March 16, 2018
5.0 out of 5 stars
Great Movie with Terrific Special Features
Verified purchase
Winner of four Academy Awards including Best Picture and Best Director, this might be one of those movies you either love or hate. Presented as both a love story and a spin on Beauty and the Beast, this isn't for children. Rated R, it includes several scenes of full frontal female nudity. I found it to be lyrical and mesmerizing and this Blu-Ray transfer is well worth the money. The video and audio are excellent, but beyond that the special features for once actually are special, particularly if you are interested in how the movie was made. Not only are some tricks revealed but there are some interview elements with Guillermo Del Toro, the director and co-writer, that clearly reveal his passion for this project. Having previously directed Hellboy, Del Toro uses what clearly was gleaned from that film and infused those elements into this one. Color and design are used overtly and covertly so that you absorb the overall tone of the movie as part of its appeal. The special features will help you understand how these things worked and made me want to watch the movie a second time in order to see those elements employed. Of course with this package you get the additional DVD disc as well as the code to access it digitally to be played on other devices. Because it's largely an interior type movie, it should hold up even on smaller screens. Add this one to your collection.
88 people found this helpful

Laura HahnReviewed in the United States on November 22, 2018
1.0 out of 5 stars
disgusting movie
Verified purchase
This movie is a depiction of our society today. It is saying that humans can do what ever they want. In this movie the writer is telling us that it is okay to mate with an animal. This kind of movie is why people are so accepting of anything these days. As a nation we should not let crap like this move continue to make money. I turned it off less than half way.
79 people found this helpful

HelenReviewed in the United States on March 4, 2018
5.0 out of 5 stars
Could not have asked for anything more!
Verified purchase
My husband and I loved this. Perhaps the difference from some reviewers is that I enjoy reading the genre of romance and basically this is an amazing, romantic fairytale. It had all the elements I need to enjoy a great HEA. We have the sad and lonely heroine, the strong and supportive best friends (Octavia Spencer and Richard Jenkins), the tortured (in this case literally, tortured) hero, and the unrepentant villain. Michael Shannon made a fabulous bad guy, really embodying everything vile. He was a horrible, self-absorbed, arrogant, racist, chauvinistic jerk and it was enjoyable to watch him disintegrate (again literally and figuratively) as the movie progressed. I always like the bad guy to loose big in the end!

Some reviewers mention bestiality but I think they are seriously missing the point here. This fantasy challenges us to rethink our own self-absorbed, arrogance. Perhaps, in thinking Eliza and the unnamed hero’s relationship is “disgusting,” we are uncovering a bit of Strickland in ourselves.

This movie has it all- romance, action, dramatic angst, Russian spies, and even an Old Hollywood-style musical scene! I could not have asked for anything more!

Moose MasReviewed in the United States on May 1, 2018
5.0 out of 5 stars
Visually amazing and beautiful love story
Verified purchase
People writing bad things about this movie either didn’t actually see it or cannot get past their own bigoted biases to appreciate the beauty, cultural messages and relevance of this wonderful film. Those who were especially appalled by this film probably see their own cruel and callous heart reflected in the film’s monster (Strickland, played by Michael Shannon).
I don’t usually like to watch movies multiple times and the movies I do watch multiple times, like V for Vendetta or the Harry Potter movies, I only watch once a year. However, I saw this movie 4 times in theaters and bought it as soon as I could. I like that this comes with a Blu-ray, dvd and digital copy.
As for the actual film content.... where to start? This is a gorgeous story about empathy, compassion, friendship, love, who is (de)valued in society, who is considered human, and who we are (dis)allowed to love. The story, like any satisfying encounter, starts slow but firm, slowly building until the climax, which will leave you hanging st the endge of your seat, rooting for the main characters, ultimately leaving you with a deep sense of satisfaction and relief. There are many reasons why this film was nominated for (and won) so many oscars, as well as earning over a 90% across film critic sites.
The soundtrack is magnificent, it’s been stuck in my head for months and I listen to it while studying and sometimes before bed, as I find it incredibly enjoyable and calming.
41 people found this helpful

RetroIrisReviewed in the United States on December 28, 2018
1.0 out of 5 stars
Did we watch the same movie??
Verified purchase
The mythical aspect of the film was unique. The acting was superb but the context was shallow. The film is vulgar and there were sex scenes attached for no reason. It also lacked closure. I am not sure of the 5 star reviews, which is why i subscribed to HBO to watch the film in the first place. I was not impressed.
40 people found this helpful

Todd30Reviewed in the United States on September 6, 2020
1.0 out of 5 stars
Awful, just awful.
Verified purchase
It's about a sexual deviant that endangers national security while pursuing her rather unusual fetish for a giant Fish Man.

Most of the film focuses on her and the rather uninteresting life that she leads, which consists of working as a janitor at a facility of some sort for the military where the Fish Man is being held. She appears to be quite lonesome. Her only real friend in the world is an unemployed artist that spends most of his spare time sexually harassing the staff of a local diner.

The Fish Man is apparently quite valuable, to the point where generals and other top brass are willing to micromanage every detail of the military's investigation regarding exactly what the Fish Man is, what his capacities are, and how said nature and capacities might be used to the benefit of the United States -- for, perhaps, the space program, they say. Or so they say. So far as the viewer can tell, most of the research consists of Michael Shannon physically abusing poor Fish Man with a baton and prod. I'm guessing he did not major in Biology when he was in school.

Unfortunately for them, this ultra-important investigation is not important enough to require the cleaning crew to submit to any kind of security clearances, which, by the story's end, I'm guessing they would be willing to consider an oversight. Similarly, they don't bother to check the work history of the top scientist on the project -- or his references, or his background, or his educational history. Again, another oversight, surely, but it is worth noting that people at Burger King are screened more thoroughly than the personnel on this project.

The main character develops a bond with the Fish Man after mopping the floors one day. Said bonding experience basically just consists of her seeing him through some glass, making a little eye contact, and then feeding him a small snack, all of which is roughly on par with the everyday interactions at your local pet shop (no, she didn't tap on the glass while going "oh, cute!"). After this hypothetically meaningful experience, she decides that she just has to rescue Fish Man from the military, because the military is mistreating him, because there wouldn't be a story if everyone in the film was nice.

The movie limps along on the premise that if you have a problem with the idea of her being in love with Fish Man, then you are a bigot. By the same way we shouldn't judge people for their skin color, or their sexual orientation (even if said orientation manifests itself as a creepy old man sexually harassing diner staff? but I digress), then we should not judge her and her Fish Man. Not the most compelling argument I have ever heard. I don't see how it is an incoherent position to hold that while being Gay is certainly okay, falling in love with a giant fish is a bit questionable. But hey, that's just me.

Or perhaps it shouldn't be taken as anything other than a touching love story? Well, then you have a formulaic, by the books romance for simpletons. It wasn't touching or unique, it was just lame. I didn't care about any of the barely-developed characters or the contrived plot mechanisms that carried them through the story. There was no tension to any moment of the story, and the payoff was about as meaningful as your typical car insurance commercial.
10 people found this helpful
See all reviews
Back to top
Get to Know Us
Make Money with Us
Amazon Payment Products
Let Us Help You
EnglishChoose a language for shopping. United StatesChoose a country/region for shopping.
© 1996-2022, Amazon.com, Inc. or its affiliates