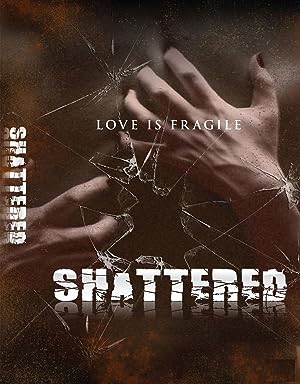 Multiple and interwoven storylines of "Shattered!" piece together the raw and emotional struggles of five men, close friends, crashing, coping with personal loss, love, intimacy, relationships, family, etc. Crisp writing produces a script that enables the actors to have film viewers emotionally invest themselves with the characters on several levels.

The rich talent of the entire ensemble cast is fully utilized under the film's skillful and tight direction of Joe Rassulo. Each cast member, lead and supporting, delivers a strong, nuanced performance to spin a cloth of Shattered!'s connected, tattered lives. Not one line of dialogue or single scene is wasted in telling the film's multiple, compelling and interconnected stories.

The cast and filmmakers craft shine brightly repeatedly in scene after scene reflecting the worn and frayed fabric of many of our own past, shattered family experiences and of present day society's many spills and stains still prevalent in just living life.

Finally, good filmmaking is good story telling. Good films give us stories that capture our imagination, our aspirations, our hopes, our fears, our emotions, our losses, and our lives. Shattered is a quilted tapestry of filmmaking that everyone should wrap himself or herself in.

S. WarnerReviewed in the United States on June 3, 2009
5.0 out of 5 stars
Very Realistic
A moving film. The beginning scene is a bit rough, but it goes uphill from there. The characters are engaging and the five story lines within the film feel very real. Similar to "Magnolia" by Paul Thomas Anderson, this film depicts the lives of many disparate people whose stories ultimately converge.

Rona from Rhode IslandReviewed in the United States on June 2, 2009
4.0 out of 5 stars
Great characters, well fleshed
Although the ending seems to have been thrown into place in a hurry, the film is compelling. The characters are well written, fleshed out, and in most cases, superbly acted.

Camera work is inventive and centers on the constant evolving and layers of each character.

Troy MathisReviewed in the United States on July 27, 2020
5.0 out of 5 stars
Review
compelling rarely told story

Jacks MomReviewed in the United States on June 4, 2009
4.0 out of 5 stars
Excellent
Shattered is a compelling and insightful exploration on the issues of divorce and it's impact on fathers and children. It had a profound and chilling effect on me. I've never seen anything like it before.

Dominic DeLayReviewed in the United States on June 3, 2009
4.0 out of 5 stars
Refreshingly Real
Highly-polished and satisfyingly complex look at adult friendships, marriage, and romance. You won't find anything else like it.

Elan FrankReviewed in the United States on June 3, 2009
5.0 out of 5 stars
fantastic Film!
well written, well directed, a true attest to the nuance of relationships in life. Bravo!
See all reviews
Back to top
Get to Know Us
Make Money with Us
Amazon Payment Products
Let Us Help You
EnglishChoose a language for shopping. United StatesChoose a country/region for shopping.
© 1996-2022, Amazon.com, Inc. or its affiliates