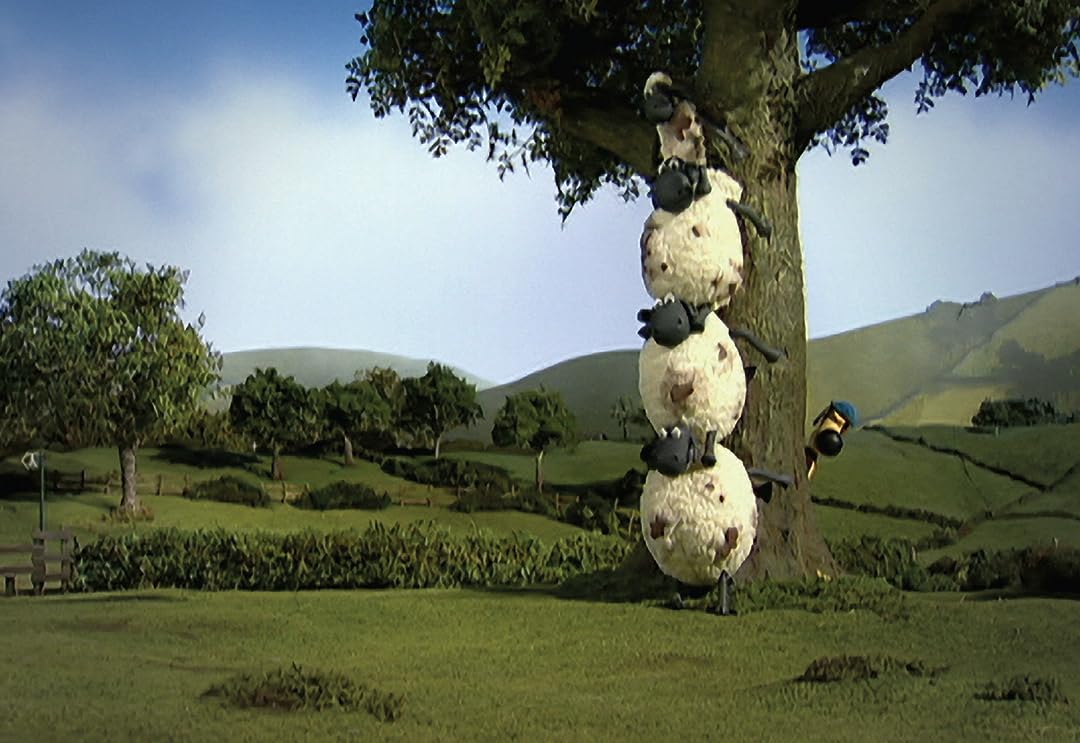 (6,216)
8.22008X-RayTV-G
It's countryside chaos as Shaun The Sheep returns to the small screen with his very own series. Peace in the valley turns to mayhem in the meadow as Shaun leads his flock into all sorts of scrapes and scraps, running rings around sheepdog Bitzer when the Farmer's back is turned.

William P. MchaleReviewed in the United States on February 9, 2016
5.0 out of 5 stars
Highly recommended for the whole family
Verified purchase
This show is in many respects a call back to many of the animated shorts that use to be shown before movies. Each episode is made up of several mini-episodes that are no more than say 5-10 minutes long, for the most part the characters, even the human ones don't speak in any way you can understand, and much of the humor is derived from slapstick. What is truly remarkable about the show is how good-hearted it is. One might expect the sheep (lead by Shaun of course) to have an adversarial relationship with the sheep dog or the farmer, but that is not the case. Sure, they may try to pull the wool over their eyes from time to time, but they also often treat them as friends. The only really consistent adversaries on the show are the pigs, and even they are relatively minor in their villainy. Highly recommended for the whole family. Kids from 3-103 should find something in the show that they will enjoy.
12 people found this helpful

LaVona E.Reviewed in the United States on December 19, 2016
5.0 out of 5 stars
shaun the sheep helped my little guy at the airport.
Verified purchase
My kids love shaun the sheep, i had never heard of it but they saw him on something else. we had a late long flight and my son is challenged with night seizures that we can acutally stop if we wake him before it is full blown and give his neurons time to "calm down" before he goes to sleep. Well he was falling asleep in the airport and started twitching, we woke him up but it was pretty late and hard to keep him awake. I pulled out my phone and he chose to watch shaun the sheep and watched many episodes which helped him stay awake for a good while and he laughed the whole time he watched. When he did fall asleep he was pretty much able to stay sleep. Thanks shaun the sheep for helping my little boy be seizure free at the airport.
9 people found this helpful

StephenReviewed in the United States on April 28, 2016
5.0 out of 5 stars
A gem amongst background clutter
Verified purchase
In a world of CGI and bottom-of-the-barrel flash animation, it's so nice to see a series that is done completely by hand, frame by agonizing frame. The folks at Aardman Animations use a stop-motion "claymation" technique, moving the plasticine characters one frame at a time. Considering a single second of film is generally 24 frames, you get an idea of the work involved. It's a true labor of love, and it shows... the characters have no dialog, but communicate just fine. And they grow on you, remaining remarkably unremarkable. A good example is the end credits (for the first couple of seasons; I'm still working my way through). It shows Shaun and some of his fellow sheep staring at some random human item while the end credits roll, occasionally glancing up at the viewer and each other. Nothing more, but nothing less, either. They remain true to their character (they ARE sheep, after all), which is strangely comforting. I can't recommend the series enough, and it's moments of laugh-out-loud humor. Enjoy!
10 people found this helpful

Michael S. KozusznikReviewed in the United States on May 8, 2015
5.0 out of 5 stars
Ah, just like the " good 'ole days! "
Verified purchase
Excellent animated series for children of all ages. ( I'm 64! ) ----- Now THIS is the type of programming that I find creative, funny, and certainly much more suitable and entertaining for viewers than the much more common " dark " cartoons and animations that are so prevalent today. Gory monsters, zombies, and Satanic looking characters seem to fill our children's minds much more than do wholesome animations such as "Shuan the Sheep " and another series from the UK called " Wallace and Gromit ".
But no, I don't pretend to be gullible enough to believe that " Leave it to Beaver " and shows like " Full House ",
" The Little Rascals " and cartoons like " Foghorn Leghorn " will ever make a comeback.
Too bad for the youth of today ----- they don't know what they've missed.
Call me old fashioned, but, I honestly believe that being fed a constant diet of Satanic, sinister programs that our youth is being exposed to daily via the airwaves of TV and the Internet ( programs and games ) produces children and young adults who cannot think for themselves but more importantly act out their transgressions as they see their " Heros " on TV do ------ with violence!

By CJs PirateReviewed in the United States on July 27, 2014
5.0 out of 5 stars
Shaun Does for Sheep What Gromit Had Done for Dogs (and Nick Park for Animation)
Verified purchase
Nick Park created the well received Wallace and Gromit prior to 1990. Following its success, Shaun the Sheep was created by Park. Shaun, much like Gromit, does not speak but uses both facial expression and body language to convey ideas.

In Episode 1, Mower Mouth, a goat, attracts attention from the farmer by chewing through his hanging laundry. In Who's the Mummy, and this is the British version of the word, not Egyptian, Shaun is present at the hatching of eggs and becomes surrogate mother to four chicks. Shaun the Farmer has Shaun covering for the dog who is playing nursemaid to the farmer.

This is great viewing for all ages. This is definitely a program in which parents not only could, but SHOULD, watch with their children to have valuable family-time.
11 people found this helpful

Michael CastReviewed in the United States on January 24, 2015
5.0 out of 5 stars
Visit the happiest, and liveliest farm EVER.
Verified purchase
OHHH! Come and meet Shaun the sheep! This meticulously choreographed claymation is the bomb. If you like Wallace and Grommet, you'll love Shaun! Is this an animation about reading writing and arithmetic...wellll, no. Not EXACTLY. But it is full of a master of common sense, Shaun, a smaller than usual sheep with a very large brain that solves crises after crises that his fellow sheep seem to fall afoul of every single episode! Shaun is special. He has a great outlook on life, and he is the epitome of the cool headed peace maker. The farm: okay, Shaun lives on a lovely picturesque farm that we ALL really wish we could escape to...no worries...no rat race...its really great; I'd say in Ireland or Scottland; there are, of course the other sheep (each individual and unique in there own way that you learn to love and expect certain inevitable shenanigans from as rote) there's Bitzer, the sheep dog who is actually Shaun's best friend and they struggle to keep the Farmer from being aware of all the impossibility hilarious escapades that happen right under his nose! There are the three pigs (the bad guys on the farm) always into mischief...but Shaun keeps it all together, but not only together, but he loves to have fun!; Disco at night, (after the Farmer throws out his old phonograph) taking the Farmers truck for a drive...there is just too much "BIG FUNNY" to try to squeeze into the newer-shorter-reviews. This truth? It's just plain fun! Especially if you give yourself time to get to know all the critters. It's always something going on with Shaun and his pals! Pure fun..
18 people found this helpful

MommyPoppinsReviewed in the United States on November 21, 2015
5.0 out of 5 stars
A Gem of a Show
Verified purchase
We love this show! We started watching it with our son when he was 2, and we were all hooked. Unlike most kids' shows, there are very few words. Most communication between the characters occurs in bleats, grumbles and oinks while the emotion is conveyed through the pleasant musical soundtrack. In that sense, it is a refreshing break from the ear-assaults of Dora and Diego. The storylines are simple and funny. Each episode contains 3 or 4 mini-stories a few minutes in length, so you don't have to have a long attention span to follow each story. Our son found it (and still finds it, three years later) funny and engaging, while we enjoy the subtler humor meant for older audiences. This is among a handful of "kid shows" that my husband and I sometimes find ourselves watching even after the kids have gone to bed.

Heike LarsonReviewed in the United States on September 12, 2015
5.0 out of 5 stars
Intelligent, cute and wholesome fun
Verified purchase
We discovered Shaun while visiting family in Germany. My children (elementary-aged) both loved it! This is a fun short animated series that is silly and fun for both children and adults alike. It's good-natured humor, and very cute; a fun little video to watch as a family. We love, too, that Shaun is very ingenious, always has great ideas, never gives up when things get challenging and in the end in one form or another prevails. He's a silly sheep--but he's also a very likable character.

We don't watch much TV or many videos in our family (at most 1-2 nights a week), and we never let the children watch without an adult there. So it's important for us to find movies and shorts that are good for adults and children--instead of jarring or annoying, as so many videos aimed at children are nowadays. This one definitely fits that bill!
See all reviews
Back to top
Get to Know Us
Make Money with Us
Amazon Payment Products
Let Us Help You
EnglishChoose a language for shopping. United StatesChoose a country/region for shopping.
© 1996-2021, Amazon.com, Inc. or its affiliates