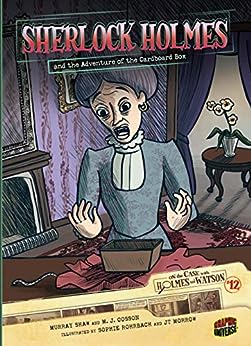 Sherlock Holmes and the Adventure of the Cardboard Box: Case 12 (On the Case with Holmes and Watson) Kindle Edition

by Sir Arthur Conan Doyle (Author), Sophie Rohrbach (Illustrator), JT Morrow (Illustrator) & 0 more Format: Kindle Edition
Book 11 of 13: On the Case with Holmes and Watson
See all formats and editions
Sorry, there was a problem loading this page. Try again.

When Miss Susan Cushing receives a package with gruesome contents, she cannot imagine who sent it. While Inspector Lestrade dismisses the package as a practical joke, Holmes fears the worst. Can Holmes and Watson discover the sender?

"Black Peter takes readers into the world of pirates with the murder of Captain Peter Carey, aka Black Peter. In Cardboard Box, a woman receives a box containing two human ears, possibly sent by a medical student seeking revenge because she had asked him to vacate the room he rented. The texts are simply written and easy to follow, and the illustrations help to keep readers involved in the stories. Each book includes a map of London, an illustrated cast of characters, and a letter from Dr. Watson explaining Holmes's logic in solving the cases. This graphic format brings the lesser-known Sherlock adventures to light. Readers who enjoy the series will be pleased with these additions." --School Library Journal

Sir Arthur Conan Doyle was born on May 22, 1859. He became a doctor in 1882. When this career did not prove successful, Doyle started writing stories. In addition to the popular Sherlock Holmes short stories and novels, Doyle also wrote historical novels, romances, and plays.

French artist Sophie Rohrbach began her career after graduating in display design at the Chambre des Commerce. She went on to design displays in many top department stores, including Galeries Lafayette. She also studied illustration at the Emile Cohl school in Lyon, France, where she now lives with her daughter. Rohrbach has illustrated many children's books.

JT Morrow has worked as a freelance illustrator for twenty years and has won several awards. He's done advertisement work for Fortune 500 companies, editorial work, book covers, and art for packaging. --This text refers to an out of print or unavailable edition of this title.

4.5 out of 5 stars
4.5 out of 5
5 global ratings
How are ratings calculated?
To calculate the overall star rating and percentage breakdown by star, we don’t use a simple average. Instead, our system considers things like how recent a review is and if the reviewer bought the item on Amazon. It also analyzes reviews to verify trustworthiness.
Top reviews

D. Fowler
HALL OF FAMETOP 500 REVIEWERVINE VOICE
5.0 out of 5 stars Dr. Watson and Sherlock Holmes team up once again to find out who sent a ghastly package and solve two murders ...
Reviewed in the United States on February 13, 2012
Dr. John Watson lived with Sherlock Holmes at 221B Baker Street for many years until his marriage. Holmes was a man of many talents, but one of his best was his ability to solve some of the most unsolvable crimes, least ways unsolvable to the average person. Dr. Watson was so intrigued with this ability, he continued to assist Holmes solve a crime at any opportunity. One "blazing hot day" in August of 1892, they sat together browsing the local papers when Holmes began to discuss a most intriguing mystery. Apparently Miss Susan Cushing of Croydon had received a package with utterly horrifying contents ... "two freshly cut human ears."

Miss Cushing was a quiet maiden who had no idea who had pulled such a prank, save perhaps some medical students she used to rent to. Obviously they got those ears from a "dissecting room." Mmmmmm, this looked like it would be one of those unsolvable cases and soon Holmes received a letter from one of the lead detectives, Mr. Lestrade, asking for his assistance. Holmes and Watson were soon off to ask a few questions. First Holmes wanted to interview Miss Cushing. After a brief conversation, a look at the package (ugh!), a look around the room the two were on their way to check out a few clues.

Miss Cushing hadn't given them a lot of information, but to Holmes even a crumb told him a lot. Time was of the essence and Holmes exclaimed, as they grabbed a cab, "Watson, we must strike while the iron is hot." Holmes had learned there was a bit of turmoil in the family and immediately headed to Miss Sarah Cushing, Susan's sister, only to be turned away because she was ill. Within moments Holmes was confident that he knew who the murderer was. Dr. Watson, of course was astounded and asked, "But Holmes, what information do we have to go on? Nothing certain has been revealed." Ah, but there was. How did Holmes know someone was murdered by looking at two ears and how in the world did he know who did it by making a couple of inquiries?

Dr. Watson and Sherlock Holmes team up once again to find out who sent a ghastly package and solve two murders. This mystery is a bit more ghoulish than some of the others because of the contents of the package, but despite the lack of obvious clues, Holmes easily solves the case. In the back of the book Dr. Watson gives the young reader a step-by-step synopsis of just how Holmes went about solving the case. When the reader flips back through the pages and puts on his or her thinking cap, they may experience that "ah" moment and see how it was accomplished. The mystery, told in a graphic novel format, is perfect for reluctant readers and may spur them on to become fans of Holmes and Watson. The flashback panels are sepia toned and easily separated from the more colorful, current ones. In the back of the book Dr. Watson explains just how Holmes solves the crime and you can find additional recommended book and website resources to explore.

Andrea Coventry
4.0 out of 5 stars Great intro to classic Holmes for young readers
Reviewed in the United States on July 11, 2012
[This review also appears on Andi's Chapter Books.]

This graphic novel series for kids is the perfect introduction to the joys of reading the adventures of Sherlock Holmes. Sherlock Holmes and the Adventure of the Cardboard Box starts with an introduction to the real series of books by Sir Arthur Conan Doyle. It also includes a map and labeled drawings of the characters. The graphic novel format makes the story easy to follow, like you're watching it on TV, except it is drawn out on the pages.

In this edition, Miss Cushing receives a package with some gruesome contents. Inspector Lestrade blows it off as a harmless prank, but Sherlock Holmes knows better. Told from Watson's point-of-view, Holmes is true-to-form as he connects the dots to solve the gruesome murder.

The story is followed by an explanation as to how Holmes solved the case, based on the clues he uncovered. It also includes recommended reading and websites. It's a great way to whet the appetite of any young amateur sleuth.

I received a complimentary set of galleys in exchange for my honest review.
Read more
Helpful
Report abuse
See all reviews