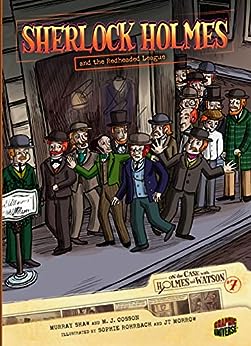 Sherlock Holmes and the Redheaded League: Case 7 (On the Case with Holmes and Watson) Kindle Edition

by Sir Arthur Conan Doyle (Author), Sophie Rohrbach (Illustrator), JT Morrow (Illustrator) & 0 more Format: Kindle Edition
Book 7 of 13: On the Case with Holmes and Watson
See all formats and editions
Sorry, there was a problem loading this page. Try again.

Jabez Wilson can’t believe his luck. He can join the Redheaded League and earn money just because of his fiery red hair. But the league suddenly breaks up, and he loses the easy income. Wilson goes to Sherlock Holmes and Dr. Watson for answers. Can Holmes discover the truth behind this bizarre club?

Sir Arthur Conan Doyle was born on May 22, 1859. He became a doctor in 1882. When this career did not prove successful, Doyle started writing stories. In addition to the popular Sherlock Holmes short stories and novels, Doyle also wrote historical novels, romances, and plays.

French artist Sophie Rohrbach began her career after graduating in display design at the Chambre des Commerce. She went on to design displays in many top department stores, including Galeries Lafayette. She also studied illustration at the Emile Cohl school in Lyon, France, where she now lives with her daughter. Rohrbach has illustrated many children's books.

JT Morrow has worked as a freelance illustrator for twenty years and has won several awards. He's done advertisement work for Fortune 500 companies, editorial work, book covers, and art for packaging. --This text refers to the paperback edition.

4.3 out of 5 stars
4.3 out of 5
8 global ratings
How are ratings calculated?
To calculate the overall star rating and percentage breakdown by star, we don’t use a simple average. Instead, our system considers things like how recent a review is and if the reviewer bought the item on Amazon. It also analyzes reviews to verify trustworthiness.
Top reviews

Whitney
5.0 out of 5 stars Perfect for the young Sherlock enthusiast!
Reviewed in the United States on January 9, 2013
Verified Purchase
I got this for my little brother (he's 7!), and he loves it. The pictures really help bring to life the details in the story that may be harder for younger readers to follow.
Read more
2 people found this helpful
Helpful
Report abuse

Colleen
2.0 out of 5 stars Two Stars
Reviewed in the United States on November 2, 2014
Verified Purchase
i was not expecting a graphic novel. i wanted a real book. i dont think the posting was clear.
Read more
Helpful
Report abuse

D. Fowler
HALL OF FAMETOP 500 REVIEWERVINE VOICE
5.0 out of 5 stars Dr. Watson and Sherlock Holmes are RED-eee to solve a most unusually bizarre mystery ...
Reviewed in the United States on October 15, 2011
Even though Dr. Watson had left 221B Baker Street to get married, he and Sherlock Holmes were still up to solving a good mystery now and then. The opportunity arose when he stopped in for a visit and Holmes was interviewing a Mr. Jabez Wilson, a small pawnshop owner. Mr. Wilson's most distinguishing feature was his flaming red hair, a head of hair that somehow got him into a pickle. It looked like it was going to be one of those "bizarre cases" that was of high interest to the two amateur detectives.

It seems that after Mr. Wilson's assistant had pointed out an unusual ad in the newspaper. It appeared that the Redheaded League was looking to hire a redheaded man and were willing to pay "four pounds a week for minor services." No doubt that Mr. Wilson could use the money and he hurried off to apply for the job. Vincent Spaulding, his assistant was willing to look after the shop while he was working. Mr. Wilson was quite pleased with the arrangement because when he'd hired Spaulding, he was willing to work "for half the usual wages just to learn the trade." It seemed that good fortune had come to the pawnshop.

Mr. Wilson closed up shop and went to Fleet Street to check out the job offer. Redheaded men lined the streets waiting for the opportunity to work for such a "princely sum." Mr. Duncan Ross, the field manager for the league, was mighty impressed with Mr. Wilson's fine mop of hair and practically hired him on the spot. The job however, turned out to be highly unusual. he was told to show up between the hours of 10:00 a.m. and 2:00 p.m., Monday through Friday, and copy the "Encyclopaedia Britannica" ... by hand. It seemed to be an incredibly easy job and very well paid, but something was amiss. It all seemed too good to be true until Mr. Wilson arrived at the office only to find a note that said the Redheaded League had been dissolved. His story sounded laughable to Dr. Watson and Mr. Holmes, but something sinister was obviously going on, but what was it? Just what was the reasoning behind this bizarre club for redheaded men?

Dr. Watson and Sherlock Holmes are RED-eee to solve a most unusually bizarre mystery. When I read about Mr. Wilson's strange story and unusual predicament I couldn't see how the two detectives were going to find any clues to solve the mystery. Naturally, Sherlock Holmes always sees the little details when others don't see anything. There are, however, enough breadcrumbs to follow and in hindsight the young reader will be able to figure out what was happening. For those who need a little help, Dr. Watson has written out the answers to questions you might have asked. For example, he tells you why Holmes was suspicious of Mr. Wilson's clerk. The artwork in this graphic novel meshes well with the tale, a tale that the amateur detective and reluctant reader will love reading. In the back of the book are additional recommended book and website resources to explore.

Amazon Customer
4.0 out of 5 stars Good book
Reviewed in the United States on December 23, 2018
Good book if you want to get it the age category is probably 6-9 it would be great to have a little more narrating parts but I thought it was still a good book
Read more
Helpful
Report abuse
See all reviews

Austen4
5.0 out of 5 stars Five Stars
Reviewed in the United Kingdom on May 11, 2016
Verified Purchase
Fab little story and the pictures and exerts from the story are very helpful.
Read more
Report abuse
See all reviews