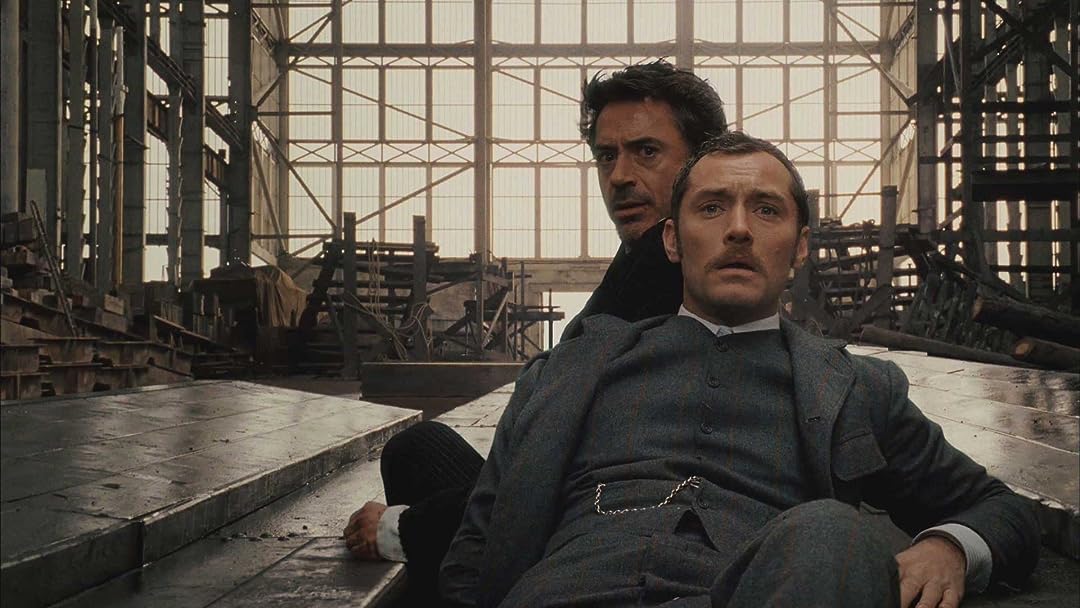 (6,854)
7.62 h 8 min2009X-RayPG-13
Revealing fighting skills as lethal as his legendary intellect, Holmes will battle as never before to bring down a new nemesis and unravel a deadly plot that could destroy the country.

seameaReviewed in the United States on January 6, 2019
3.0 out of 5 stars
I was expecting a better movie but...
Verified purchase
I rented this movie in hopes that I would be enthralled and entertained but I wasn't. Robert Downey Jr. I felt didn't do the Sherlock character justice nor was he convincing. Jude Law did an acceptable version of Watson but other than that it was a mediocre movie. I was disappointed at the lack of emotion and character development. I felt like I was watching RDjr portray a character instead of becoming the character. I lost interest in the movie early on. Sometimes it's the acting that drags the movie and sometimes the writing is to blame but with this movie it was both. 1/6/2019.
40 people found this helpful

TechnologistReviewed in the United States on January 22, 2020
2.0 out of 5 stars
Disappointed in the movie.
Verified purchase
The movie is advertised as Action, Adventure, Suspense, Drama, but it is hardly that. If you are expecting that, you'll be disappointed as I was. This movie is a comedy that does not know if it is the Matrix, Kill Bill, or the Last Samurai. I was laughing at scenes that for something titled Sherlock Holmes would be inappropriate. It is hardly a who dun it when you know right off who the villain is. They tried to make it thought-provoking by how things were done, and not in you figuring things out as the movie progresses. If you are looking for a comedy, yes, this may just fit what you are looking for, as for me, it was not. Once I realized that this was a comedy, Robert Downey Jr's accent made more sense. That is if they are picking on the British accent. If it was a real attempt, it failed miserably.
15 people found this helpful

J. P.Reviewed in the United States on January 25, 2020
5.0 out of 5 stars
An artistically flawed Sherlock Holmes -- quite fun!
Verified purchase
This film version of Sherlock Holmes is a prime example of film as an art. From the lively, quick-moving camera work that dances around a mysterious plot, to the beautiful sprinkling of graphic design touches in the titles and end credits – Sherlock Holmes is an artistic expression of film magic. I didn't think I was going to like this film -- but, I loved it.

Sherlock Holmes, in this film version of Sir Arthur Conan Doyle's famous fictional detective series, is a deliciously flawed man. How refreshing. If anything I hated about the usual Holmes character was that he was always so stinking perfect. The irony of Holmes desperately trying to stop his longtime sidekick Dr. Watson from marrying while brilliantly solving a criminal crisis is a stiff upper lip hoot. The lightening fast dialogue, plot and camera shots -- well now, you better sit up and pay attention or you're likely to miss something, unlike Sherlock Holmes, who doesn't miss a clue.

joel wingReviewed in the United States on March 11, 2020
4.0 out of 5 stars
Worthy addition to the Holmes and Watson franchise
Verified purchase
This was Guy Ritchie’s very successful venture into the Sherlock Holmes franchise. The movie featured Robert Downey Jr. as Sherlock Holmes, Jude Law as Dr. John Watson, Mark Strong as the protagonist Lord Henry Blackwood, and Rachel McAdams as Irene Adler who was a thief who worked for Professor Moriarty, but also had a relationship with Holmes. The movie played on the occult as Lord Blackwood claimed he came back from the dead and had the backing of a guild of magicians made up of powerful lords in England. He planned to seize power in the country.

Ritchie was very stylish with the movie. For instance at the start Holmes is being chased and graphically plans out how he will attack his pursuer through a series of slow motion fight moves. In his earlier movie Snatch he used slow motion in his fight sequences, but now he added to it.

Downey and Law were very good at their roles. Rather than the bumbling Watson of some of the older versions of the duo Law played him straight. Half the time he made excuses for Holmes’ eccentricities, and then argued with him, and then helped him. Downey was great making Holmes a mad scientist. He’d spend time in his office working on all kinds of ridiculous experiments, and then became inspired when he found a case to work on. He was also very witty. They were one of the original odd couples and Downey and Law played that up.

Strong and McAdams were also noteworthy. Strong played the evil genius and McAdams the seductress.

Overall, Sherlock Holmes was a lot of fun and a very worthy addition to the series. There was action, there was intrigue, there was mystery all very well done by Ritchie and the cast.
C

American WestReviewed in the United States on August 7, 2015
5.0 out of 5 stars
Brilliant. Brilliant. Brilliant.
Verified purchase
More true to the pretentious, self-absorbed, drug-addicted, and exceptional investigative mind of the original books, Downey's Sherlock Holmes character is simultaneously thoroughly appreciable and throughly reprehensible. When a superior adversary plays on the fears and superstitions of average people, in order to realize a truly megalomaniacal objective, Sherlock is the only one sufficiently intelligent and sufficient crazy enough, to solve the plot. Sherlock's madness, obsession with Dr. Watson (possibly the only "friend" he's had in his entire life), and willingness to look far beyond common perceptions of what constitutes reality, allow him, along with his oddly talented physical prowess, to win the day, for Great Britain, and for the common good. Some of the more interesting elements involve a thoroughly talented, yet entirely criminal, fem fatale (whom Sherlock thoroughly lusts after and / or loves) and Sherlock's ability to rapidly access physical weaknesses of combatants whom he is up against (ingenuously captured by Guy Ritchie, in brief, Sherlock-narrated summaries of his brain's thoughts, the likes of which we can see are instantly postulated in Sherlock's mind, allowing him to overwhelm any opponent, in a fight, played in slow motion, then executed in real time). Guy Richie is a incredibly talented director and filmmaker. His attention to detail, in terms of wardrobe, architecture, and other historical markers, make this mid-19th Century detective drama a sheer pleasure to absorb. Bravo to a rare gem of a movie that provides drama, comedy, action, adventure, and intellectual stimulation, with no apologies.
36 people found this helpful

Ice PlanetReviewed in the United States on January 20, 2020
1.0 out of 5 stars
Boring, Tiresome Screechy Music
Verified purchase
Lack of any real plot with some clever and some tedious fight chase scenes always accompanied by screechy gypsy music which only detracts from the Old English environment. Nothing to sustain interest.
11 people found this helpful

J.B.Reviewed in the United States on February 4, 2021
1.0 out of 5 stars
Not My Kinda Sherlock
Verified purchase
I just couldn't grasp Sherlock so ill groomed, whose living quarters looked to be a scene from hoarders. Many of the sets were too fake/computer generated/action/video game like. There were way too many fight scenes, too, I prefer my Sherlock to be more calm, peace loving, and brainy, not the pirate/super hero type. I could have done without the desperately cliche entry of the dark arts along with its costuming and relics. Loved the actors, not the roles, sets, props, or story line. Perhaps it hinting a foreshadowing of what we are up against. Really disappointing film for me, the computer generated action was really an overkill.
2 people found this helpful

PubliusReviewed in the United States on February 16, 2020
1.0 out of 5 stars
Waste of time
Verified purchase
Bears no resemblance at all to the hero of Sir Arthur Conan Doyle's stories. This Holmes participates in underground fight clubs. This movie is extremely boring, insulting, and ridiculous... in equal turns. Reminded me of The Wild West remake with Will Smith... ostensibly set in Victorian England but with impossible "steampunk" technology and hipness. Stupid.
5 people found this helpful
See all reviews
Back to top
Get to Know Us
Make Money with Us
Amazon Payment Products
Let Us Help You
EnglishChoose a language for shopping. United StatesChoose a country/region for shopping.
© 1996-2022, Amazon.com, Inc. or its affiliates