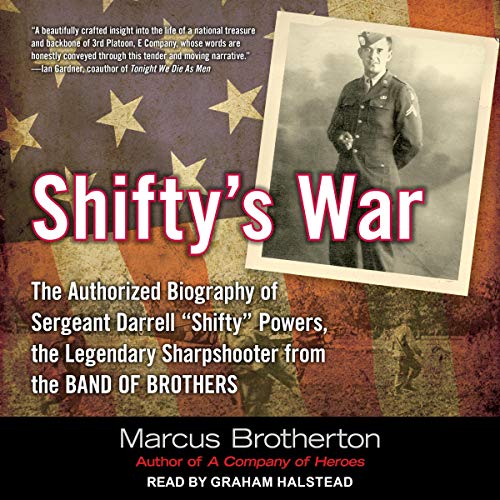 Shifty's War: The Authorized Biography of Sergeant Darrell “Shifty” Powers, the Legendary Sharpshooter from the Band of Brothers

4.7 out of 5 stars
4.7 out of 5
450 global ratings
How are ratings calculated?
To calculate the overall star rating and percentage breakdown by star, we don’t use a simple average. Instead, our system considers things like how recent a review is and if the reviewer bought the item on Amazon. It also analyzes reviews to verify trustworthiness.
Top reviews

R. Sanchez
5.0 out of 5 stars A Book that Everyone Should Read
Reviewed in the United States on March 1, 2017
Verified Purchase
Shifty Powers was no conceited egomaniac who wanted to shine like like no other in his autobiography. Instead, his level-headedness and company spirit permeate the book. He writes about Easy Company, their jumps, their battles, their sorrows and friendships. A gentle soul, who was a gifted shot and saved many a life, his voice moves through the novel to explain the war and Easy Company's role in it. When I finished, I cried. A great patriot and a selfless soldier and man, this country is fortunate indeed to have had Shifty Powers on its side. A class act, a gentleman-soldier, Shifty Powers was what we all should aspire to be. The book is extremely well written and I highly recommend it. After you read the book, you will look at any garden differently.
Read more
17 people found this helpful
Helpful
Report abuse

Mike
5.0 out of 5 stars Humble, Honerable Warrior
Reviewed in the United States on January 27, 2018
Verified Purchase
I have read many of the Easy Company's biographies and this one is my favorite. It is told from the perspective of a country/ mountain boy who grew up hunting and fishing like me. His daddy taught him to shoot straight and not waste bullets or game; to be an honest ethical hunter and fisherman. Going to war was hell on earth; but his unique skills in the woods helped him survive and helped many of his fellow soldiers survive because he could shoot accurately and dependably. Then he came home and lived out his life as I would pray a veteran could. Thank God for people like Shifty Powers! He and his kind are what makes America the hope and dreams of so many in the world today.
Read more
10 people found this helpful
Helpful
Report abuse

John Flora
5.0 out of 5 stars Shifty didn't write it, but it reads like he did
Reviewed in the United States on August 3, 2019
Verified Purchase
This book, written in Shifty's voice, is a fascinating "autobiography" that sounded authentic enough to win approval from Shifty's family. Based on several telephone interviews, the story has a lively authentic ring to it that makes it hard to put down. Now that I've finished it, I want to go back and re-view the Band of Brothers miniseries.
Read more
7 people found this helpful
Helpful
Report abuse

Jaime Olson
5.0 out of 5 stars Good Read, I Do Declare
Reviewed in the United States on January 2, 2020
Verified Purchase
I read this alongside Major Dick Winters' memoirs. It's a quick read, and I really enjoyed it. Even though it's written by someone speaking for Powers, I do declare, you feel like he's talking directly to you as though you're both sitting on his porch on a fine summer day drinking some lemonade, you surely do. I wish I had folks in my life to know like Shifty Powers, or Dick Winters, but the Lord didn't bless me with grandpas, though he did surely bless us with books. :)
Read more
3 people found this helpful
Helpful
Report abuse

Sharon S.
5.0 out of 5 stars One of the best books I've ever read.
Reviewed in the United States on June 1, 2021
Verified Purchase
I loved this book! If you're a WWII history buff, you'll thoroughly enjoy it. The writing in the first person, makes it seem like you're sitting in front of Shifty listening to first hand accounts of their experiences, and atrocities they saw and survived through, some funny stories, most not. I hated to come to the end of the book as I felt like I was having to say goodbye to a dear friend as the writing is on such a personal level.
Read more
One person found this helpful
Helpful
Report abuse

HEH
5.0 out of 5 stars A great little book about a Virgina mountain boy in the Band of Brothers
Reviewed in the United States on July 15, 2020
Verified Purchase
Well written, it explains his excellence in the battles as the way his father raised him. He was well respected by his fellow paratroopers and returned to a normal life in the mountains of Virginia. I wish I had the opportunity to sit on his front porch and talk to him, but this book is the next best thing to doing that.
Read more
2 people found this helpful
Helpful
Report abuse

Jim, Stuart, FL
5.0 out of 5 stars One of the Greatest of the Greatest Generation
Reviewed in the United States on May 15, 2020
Verified Purchase
This is a wonderful biography of a humble soldier of exceptional character ,courage and integrity. It is also a first person history of the D day, Market Garden, and Bastogne battles as experienced first hand by that soldier. When you finish the book you ask yourself if there are any men who come close to measuring up to Shifty Powers today.
Read more
2 people found this helpful
Helpful
Report abuse

I sent the following note to Marcus via his Facebook page. Thought I'd share it with you as it tells you why you need to go out buy this book and have a "sitdown" with Shifty and let him tell you his story.

To Marcus Brotherton I wrote:

I have been home the past few days both recovering from sinus surgery and fighting off bronchitis that decided to pay me a visit. I happy to say the recovery is going well and I have the bronchitis on the run.

On Thursday after I decided to start reading your book. I read half of it in one setting. It flowed very smoothly and was as if I was sitting next to Shifty hearing him tell his story. Very well done.

I did not get a chance to read many pages of the book on Friday as I had a follow up appointment with ENT specialist and was feeling under the weather from bronchitis. I also did not get to read it this past Saturday.

I woke today and after having breakfast, I decided it was time to continue the journey through Shifty's life as you brilliantly assembled it in his words on paper. Once again, I could not put the book down.

As I read the book, I heard myself chuckle at times. I also found myself glued to every word. What an awesome story about a Great Man and Hero.

I must admit that I got teary eyed as I chapter of the book in which Shifty described his illness and the loss of his unborn great grandson. As I read the last sentence on page 254, I noticed tears streaming down my cheeks. And yes, the legacy of of Shifty Powers continues.

I want to thank you for writing this WONDERFUL book and telling Shifty's story. I encourage to write other books about the remaining members of Easy Company. Only you can tell their stories through words in the way their stories deserve to be told.

God bless you and thank you again for such a wonderful book.

anthony
5.0 out of 5 stars Shifty
Reviewed in the United Kingdom on July 10, 2012
Verified Purchase
Although this book is written by Marcus Brotherton it is just like Shifty is speaking to you through the pages.This book makes you laugh, cry and cringe.It starts with Shifty growing up and the love for, and from his family shines brightly through every word drawled in his local accent.The book then walks you through the war years, were and how is explained better than "band of brothers".You you then learn about the man who spent the years after the war serving the people around him back in the mountains were he grew up and returns to, in such a modest way.It shows what a man like Shifty really wanted "Peace".
Read more
4 people found this helpful
Report abuse

ruth biltawi
4.0 out of 5 stars Shifty powers up a great read !
Reviewed in the United Kingdom on February 22, 2014
Verified Purchase
Great insight on a soldiers story :-) shifty powers comes across as a true patriot,family man and a man of humility and honour who tried his best to find peace after his sickening experiences of war that clearly scarred him,losing so many close friends in battle his greatest battles with grief and guilt lay ahead of him post war and with the help of his family his faith and his band of brothers he paints a true and honest picture of how not only was he a great soldier but a great man who loved to hunt,fish and smoke and spend time with his family.The earlier chapters really set the scene and help you understand why he became such an excellent sharpshooter the war narrative is full of detail and moves along at a good pace the after war struggles of resettling back into his beloved home and finding work show how post war life could be just as tough but how he took up the challenges ! A great read and I passed it onto a friend immediately it's too good a story to be sitting on the book shelf !
Read more
3 people found this helpful
Report abuse

Edcase
5.0 out of 5 stars Fabulous!
Reviewed in the United Kingdom on January 31, 2017
Verified Purchase
The author has done a fantastic job in writing this in the first person. The reader feels he gets to know the man. An uncomplicated but very clever man who's main focus is getting back to his family in one piece. I thoroughly recommend this book.
Read more
Report abuse

Amazon Customer
5.0 out of 5 stars What can I say.
Reviewed in the United Kingdom on September 16, 2013
Verified Purchase
Having seen the mini series, read the book also the book written about Major Winters I just had to read about Shifty Powers. I was not disappointed, it was an excellent story written in the first person and in his own dialect. It was as if he was telling it himself, I felt as if I was getting inside the man.
Read more
Report abuse
See all reviews
Back to top
Get to Know Us
Make Money with Us
Amazon Payment Products
Let Us Help You
EnglishChoose a language for shopping. United StatesChoose a country/region for shopping.
© 1996-2021, Amazon.com, Inc. or its affiliates