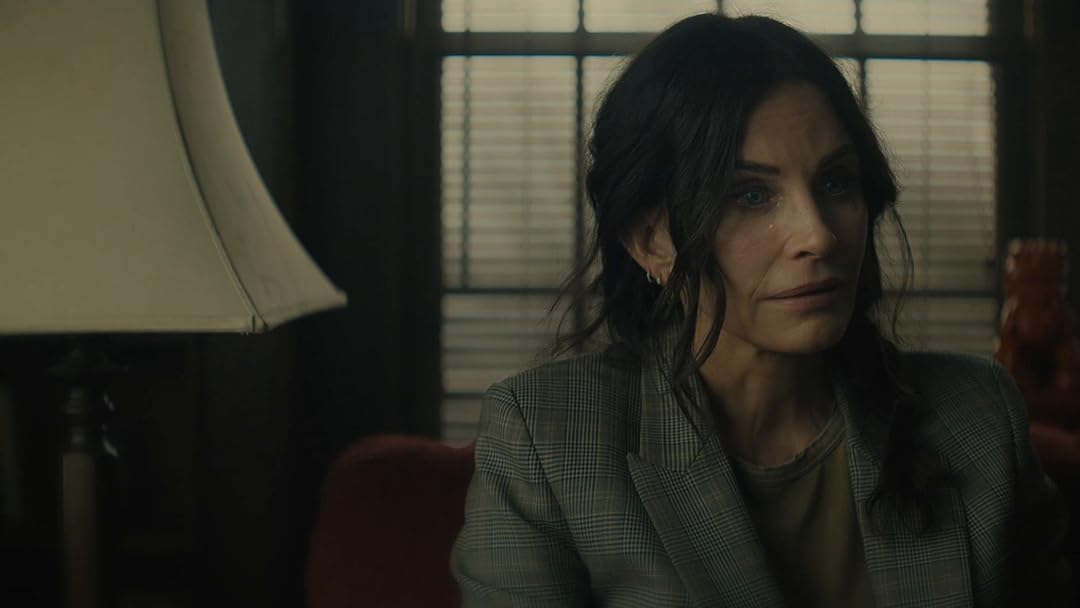 Season 1
(41)
6.82022X-RayTV-MA
SHINING VALE is a horror comedy, starring Courteney Cox, Greg Kinnear & Mira Sorvino, about a dysfunctional family that moves from the city to a small town into a house in which terrible atrocities have happened. No one notices except for Pat (Cox), who’s convinced she’s either depressed or possessed – the symptoms are exactly the same. Everyone has their demons, but for Pat, they may be real.

swinkydinkypugReviewed in the United States on April 12, 2022
4.0 out of 5 stars
Smart, sharp and surprising!
Bear with me while I zig zag through this review. First off...This is a show that demands a little more of the viewer than most. If you are looking for immediate gratification you won't find it here.
There''s something familiar and ever formulaic about the first episode. Courtney Cox and Greg Kinnear, ordinarily so endearing, are teetering on the edge of intolerable. Everything seems disjointed and you can feel the funny but the edges are so sharp that it gets cut down before it registers.
If there's one thing that's hard to find in television, it's DIFFERENT. Evrything has been done and done and done, again. It's all so familiar and digestable. It's easy to forget that GOOD television ( good anything really) has to have an element of discomfort. Anything that's totally comfortable is inevitably something we already know and understand.
This might not be your cup of tea... but please don't review Shining Vale unless you've watched at least the first three episodes. This show is asking the viewer to "Bear with us! Suspend judgement, We've got something here".
Everything I disliked about the first couple of episodes are the things I like most now. I don't know when the switch happened, I just know I went from wondering what poor Courtney Cox had gotten herself involved in, to irritated with FRIENDS for only utilizing 5% of this woman's talent.
Why have we've been bowing at the altar of Aniston for all these years?
Shining Vale won't be everyone's cup of tea, but anything worth watching, rarely is.
4 stars for room to grow.

DHSReviewed in the United States on May 10, 2022
1.0 out of 5 stars
IF ONLY I COULD GIVE NEGATIVE STARS
This show is absolutely terrible. I'm a huge fan of Greg Kinnear and Courtney Cox but even they can't save this steaming pile of crap. The writers can't decide if they're writing a comedy or horror. The dialouge is terrible. An F-bomb for every other word is shallow and tiresome. Depicting Christians as a crude caricature is especially offensive. Anyone familiar with real Christians knows that they are the kindest, most genuine, selfless people on the planet. To say this show is nothing but a steaming pile of crap is an insult to steaming piles of crap everywhere.
2 people found this helpful

California NativeReviewed in the United States on May 21, 2022
2.0 out of 5 stars
Painful to watch...
I desperately wanted to finish watching the first episode, but I had to keep fast-forwarding in order to not turn it off completely. This show is trying very hard to be...something. I'm not sure what it wants to be, but it is trying so hard it's embarrassing. Kinnear is decent but has very little to play off of in the script. The Gameboy kid is fine. The rebellious teen girl is annoying as possible, but then that's the cliché when creating teen girl characters, so I guess she's a success.

Cox, though, I'm not a huge fan, and this disjointed mess didn't win me over to her team. I don't know that it's anything she's doing wrong. The chemistry isn't there between the characters, and it's not a winning script, particularly with everyone dropping the F-bomb every other line. How about some real dialog instead? Also, hint to the beauty team, I realize Cox is super skinny, and the older you get, the less that super skinny works for you, but with the gloomy lighting, she's almost corpse-like.

Three stars for the set dresser, minus one for the opening sequence in the car, which couldn't look less like Connecticut and more like California if you tried.

CTindallReviewed in the United States on May 6, 2022
5.0 out of 5 stars
Season Two...Please!
I enjoyed this from episode one. While I am not a huge Cox fan, she redeems herself with this series. The cast is wonderful with Mira and Greg, plus the daughter is an added splash of teen angst. Watch it....fingers are crossed for the next season.
3 people found this helpful

Me says...Reviewed in the United States on March 23, 2022
1.0 out of 5 stars
I Ghosted This Show After Episode One
I had high hopes for this new series considering the cast, and I'm always up for a good ghost story, but this is one of the biggest flops I've seen in a while. It tries so hard to be funny, provocative, and mysterious, yet only manages to be crude and contrived. The writing is just a mess and I found myself really not caring about any of the characters. I really struggled to get through the first episode without turning it off, all the while hoping that it would get better by the end, but it didn't. The main actors are truly likable in other works, but even this ensemble can't save this production or its storytelling.
2 people found this helpful

lana gReviewed in the United States on March 14, 2022
4.0 out of 5 stars
So brazen
Such a great cast. Every character is quirky and it's good to see Mira Sorvino back and sliding so easily into this role after a long hiatus. There's also a very raunchy taste and brazen feel to this show which I really enjoy. And I love it the supernatural element. I just wish it was a tad bit scarier and less comedic at times. But yes, the profane language is so hilarious that I really don't mind the lack of horror (since I'm a huge horror fan).

This mix of dirty realism centering on issues of divorce and the struggles of marriage is also a nice touch, it keeps the story a bit more grounded and relatable. I'm interested in seeing what the ghost character wants out of Pat and how much Pat is going to allow herself to actually spiral.
3 people found this helpful

Kindle CustomerReviewed in the United States on April 25, 2022
1.0 out of 5 stars
Unbearably stupid.
A grave insult to anyone who has ever experienced severe depression. Hallucination is not a symptom of depression. To liken one of the worst illnesses in existence to being possessed by a demon is cheap.

Apart from that ,the screenplay is bad. Stupid. You don't begin a ghost story in the first three minutes. This has all the subtlety of being hit in the head with a boulder. Amazing what gets made these days. I know streaming is hungry for content, but this is absurd.
One person found this helpful

IthacaRedReviewed in the United States on June 4, 2022
5.0 out of 5 stars
Sharon Horgan is my favorite writer!!
I’m a massive horror fan and horror comedy fan. I adore everything Sharon Horgan creates/writes. How is she so wildly talented?

I binged the entire 1st season tonight and will rewatch later in the week. The satire, homages, playing with tropes and mixing them all together in a fresh way is absolute brilliance. The cast is exquisite. There are so many nods to the Shining that had me laughing out loud, as well as loads of other horror films, feminist films/novels, and other social commentary. Thank you thank you Sharon!!!!
Can’t wait for season 2!
See all reviews
Back to top
Get to Know Us
Make Money with Us
Amazon Payment Products
Let Us Help You
EnglishChoose a language for shopping. United StatesChoose a country/region for shopping.
© 1996-2022, Amazon.com, Inc. or its affiliates