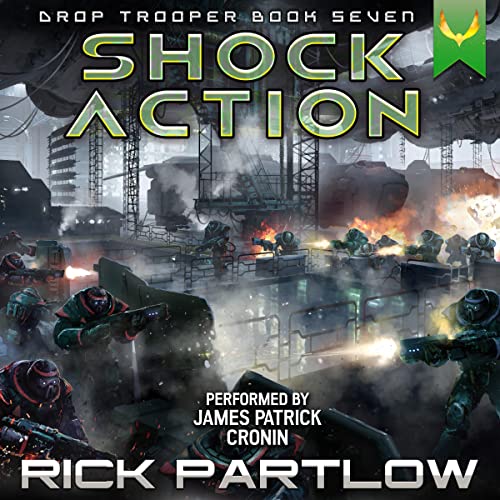 Cam is a Marine, not a spy.

That’s what he keeps trying to tell Fleet Intelligence. But when he and Vicky signed back up, they agreed to follow orders. And their orders are to keep working for the Corporate Security Force, and find out what the private paramilitary force knows about Zan-Thint, and his plans to use Predecessor technology against the Commonwealth.

The trouble is, the CSF doesn’t seem to care about Zan-Thint anymore. They send Cam and Vicky, and a crew of mercenary Drop Troopers, to an isolated mining world called Portent. Their job? To put down a rebellion by wildcat miners who don’t want the Corporate Council stealing the fruits of their labor. Somehow, they’ve been able to hire the baddest mercenaries in the Commonwealth, to hold onto their planet.

Stuck leading a crew of cutthroat mercenaries - who want nothing more than to slaughter the wildcat miners, and take their rhenium ore - facing down an even more cutthroat band of mercenaries who’ll kill anyone they consider a threat, Cam and Vicky try to negotiate a course between the two, and figure out who’s actually paying the mercenaries, and why the Corporate Council is really interested in a backwoods rhenium mine.

Because nothing on Portent is as it seems.... And their allies might be just as ready to kill them, as their enemies.

Book 7 in the Amazon best-selling Drop Trooper series by Rick Partlow is here. It's military sci-fi, the way it's supposed to be!

Steve Moso
5.0 out of 5 stars Fine addition to series
Reviewed in the United States on June 22, 2021
Verified Purchase
Partlow continues series with another winner. In a war torn galaxy where corporate greed vs covert ops a ptsd inflicted veteran and his wife have come out of retirement to fight an once defeated enemy that will not go away. Plenty of action and regrets for those that didn't make ways heavy on the two but they still retain their sense of self-confidence and unbridled determination for fighting the good fight even in the face of adversity sometimes even from the ones they are fighting for.
Read more
2 people found this helpful
Helpful
Report abuse

S B. Doyle
5.0 out of 5 stars Good read
Reviewed in the United States on July 7, 2021
Verified Purchase
Another exciting book full of surprises and action. I really enjoy the realistic military mentality that permeates the action. Pre-planning, staging, execution, and the proverbial “on the fly changes” after the first contact with the enemy! And don’t forget the humanity Rick fleshes out his characters with; self doubt, quilt, morality, exhaustion, to name a few. You don’t get bored reading Rick’s books!
Read more
Helpful
Report abuse

RCW
5.0 out of 5 stars Great addition to the continuing story of Cam and Vicky.
Reviewed in the United States on April 16, 2022
Verified Purchase
I am currently on book #8 of this series, having just finished Shock Action. Some long series collections tend to lose steam in the later novels, but these don't disappoint. Rick manages to keep the action going and makes me look forward to each saga. The only let down I'll experience is when the series finally does end. If you're a fan of this genre of SciFi, the Drop Trooper novels are a worthy addition to your library.
Read more
Helpful
Report abuse

E Sampson
5.0 out of 5 stars One More Time
Reviewed in the United States on June 28, 2021
Verified Purchase
How does LT Cameron Alvarez end up being involved in most of the major actions and battles during the war with the Tahni, and then in operations concerning Tahni subterfuge after the war? As a marine in active duty and as merely a civilian?
Just lucky, I guess.
And now he is about to suit up and do it again.
I hope his luck holds.
Read more
One person found this helpful
Helpful
Report abuse

Robert Adam Follis
5.0 out of 5 stars Another killer book in the series
Reviewed in the United States on July 14, 2021
Verified Purchase
I don't know how Rick keeps it up, but every single book he writes is a good one! What is really interesting is the way they involve the same universe with interlocking characters and timelines. I can't recommend the Drop Trooper series enough, but don't stop there, you won't go wrong reading everything Rick has written.
Read more
Helpful
Report abuse

Jody
5.0 out of 5 stars Another winner in the Drop Trooper series
Reviewed in the United States on December 14, 2021
Verified Purchase
First off, I’ve read a lot of Rick’s stuff. Tying this series into the Glory Boy universe has been great and I have enjoyed reading about a different part of the same interstellar war.

Cam’s character is compelling and always growing, even when he struggles and I appreciate a well written character.

John M.
5.0 out of 5 stars Just wow...
Reviewed in the United States on March 20, 2022
Verified Purchase
I really enjoyed reading the previous installment. I was so looking forwarded to following that one up with this one...and it didn't disappoint!!! Great story, amazing characters, and cool action. Looking forwarded to the next one.
Read more
Helpful
Report abuse

Kindle Customer
5.0 out of 5 stars Page Turner!
Reviewed in the United States on July 6, 2021
Verified Purchase
If you are weak for a good story and action, well, just crack it open and ... hope you have your restraints on!
Rick lays out a fantastic yarn with all the realistic aspects of the characters and combat. And yes, you always will want more. Because he takes you by the hand...
Read more
Helpful
Report abuse
See all reviews

S. Reid
5.0 out of 5 stars It's Complicated
Reviewed in the United Kingdom on March 23, 2022
Verified Purchase
Being undercover seems to take Cam and Vicky from frying pan to fire as they hunt their elusive quarry and as things seem to be getting worse and the level of enemies they face get bigger the action and excitement matches it. Some great action storytelling and as we come closer to the end so does the anticipation.
Read more
Report abuse

mr
3.0 out of 5 stars Good continuation of the story line all be it a a little diluted
Reviewed in the United Kingdom on July 26, 2021
Verified Purchase
The story continues but looses some of the drop trooper action we have come to expect and is somewhat diluted with large doses of luke warm spy novels.
A good read all the same but there are lot of typo's and non sensical sentences, rushed editing I would imagine to get the book out but could do with a little more care when proof reading/editing.

I look forward to the next book in the series.
Read more
Report abuse

Kindle Customer
4.0 out of 5 stars The plot thickens!
Reviewed in Canada on July 19, 2021
Verified Purchase
Love it! I hope that there will be more action and spaceships and aliens and booms! Keep up with the great work! I love it! Thank you! I can't wait for the next book!
Read more
Report abuse