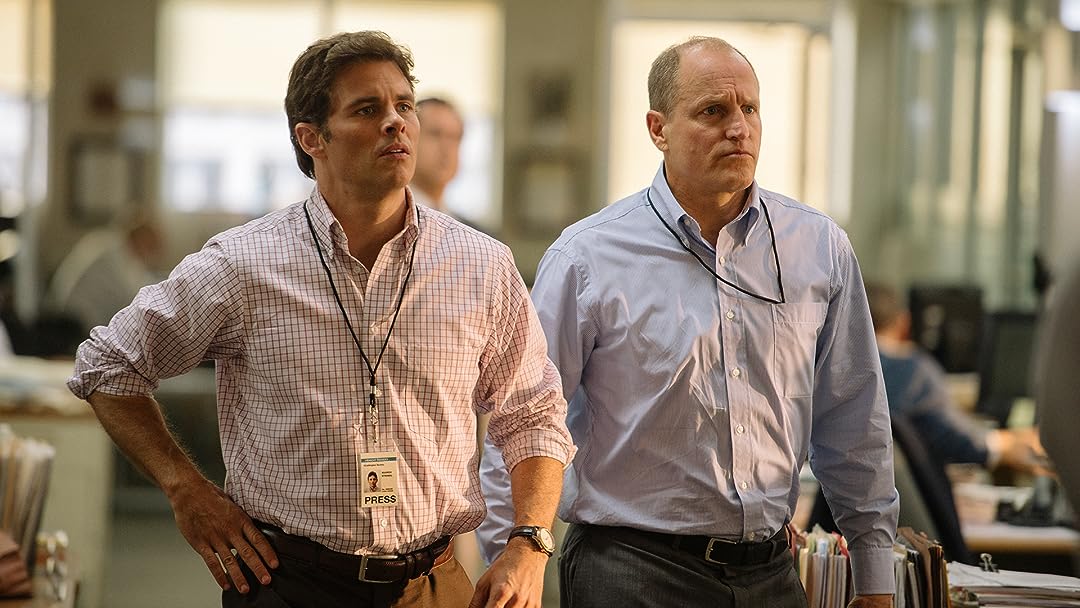 (1,014)
6.31 h 30 min2018X-RayR
A group of journalists covering George Bush's planned invasion of Iraq in 2003 are skeptical of the president's claim that Saddam Hussein has 'weapons of mass destruction.'

Donna M.Reviewed in the United States on January 2, 2019
5.0 out of 5 stars
A necessary reminder
Verified purchase
The film, Shock and Awe, provides an important reminder that news organizations and programs need to challenge governmental accounts of events and the evidence governmental actors present. Without excessive dramatic frills, Shock and Awe provides a steady and factual retelling of the lead-up to the invasion of Iraq and how most major American news outlets were gung-ho in helping sell the need to attack Iraq.
There are many specifics missing from this docu-drama, but it is a story about Knight Ridder's journalistic integrity -- not just the government's deceptions to start a war. Still, I would have liked to see something more on Hans Blix, especially his last UN press conference when he told reporters, with a hint of disgust in his voice, to have good luck finding the WMD. Another important piece missing was the thorough reporting by Sy Hersh on Tora Bora and OBL's convenient escape to Pakistan. Alas, including everything would have made for a very long movie!
Overall, Shock and Awe is very well done... good viewing.

Larry ReidReviewed in the United States on April 15, 2019
5.0 out of 5 stars
The real story of the invasion of Iraq
Verified purchase
G W Bush lied and people died. This is the true story of some outstanding journalists who were ignored in the frenzy to avenge 9/11. Bush (43) had an axe to grind and Cheney had no scruples, so they fabricated intelligence and/or settled for intel which was highly suspect while ignoring UN inspections and agents on the ground. The soldiers looking for WMDs sustained casualties looking for weapons which never existed. Civilians and soldiers on both sides died to rid the world of a bad guy, but there are a LOT of bad guys out there. Saddam had nothing to do with Iraq and Al Queda had no significant presence in Iraq until AFTER we took him out of power. Al Queda in Iraq morphed into ISIS and the "Arab Spring" democracy movements all melted down because you don't impose democracy from the top down. It has to be a movement of dedicated people who understand the concept, but Bush and Cheney didn't care. We found no evidence of WMDs, oil revenue did not pay for our war expenses and Iran has a new partner thanks to G W Bush. Joe Galloway is one of our finest journalists. He and others at Knight-Ridder tried to warn us but access is currency in the news business, so the American public never got the truth until after countless lives had been lost for little or nothing. Not a feel good movie, but it's the truth if you can handle it.
31 people found this helpful

BanReviewed in the United States on January 5, 2019
1.0 out of 5 stars
Some more tired Hollywood politics...
Verified purchase
If you've had it with Hollywood's political bubble, then don't bother with this. It's just more dumbed-down infaux (vs. info) about what the half-literate agenda mongers of glitzytown have to lay on those who'll take their word for anything. Plus...how many more movies about the Iraq war do we need? Bored me to tears.
46 people found this helpful

Michael ShipReviewed in the United States on August 23, 2021
1.0 out of 5 stars
This movie will disappoint
Verified purchase
So many fine actors I thought I should give it a try. 38 minutes in, I could not stand to be preached at anymore and abandoned the rest (let me know if it suddenly got better toward the end).

No doubt that there were mistakes made and it would have been nice to see this dramatized. But the thrust of the movie is a lot of childish lecturing to us by our betters about what we should think. Using childish nicknames for people in our government and Fox News (while ignoring that the Democrats were saying the exact same things at the exact same time (including Biden, Clinton, Feinstein, Kerry, Reid, and Schumer)) only proved your bias.

By the way, the Iraqi Survey Group DID find WMD in Iraq - though certainly much less than was expected.

Not Real NameReviewed in the United States on August 24, 2019
5.0 out of 5 stars
Worthy Cliff Notes on a war crime
Verified purchase
Five stars alone for the reminder about Tokyo Rose (Judith Miller) of both The New York Times and CNN, "The Most Trusted...…." Miller's reporting on WMD's was simply dopey, then her bosses at The Times proceeded to hail her as a hero for outing Valerie Plame. Where is Moe Howard when you really need him?
Meanwhile, the American press continues to be dodgy on the war crimes proceedings against Bush, Cheney and even Alberto Gonzales, who is still asked for his legal opinions by some networks. There are reports they were convicted in absentia. Do I see a hand raised out there?
There are no time machines, but we can perhaps stop or stall this royal line of Bush disasters. Dubya's nephew, George P. Bush, has somehow become the Texas Land Commissioner. These days most state offices in Texas are run by walk-ons. He's padding his resume for bigger things, though, and Wikipedia is a very willing vessel. His military career is actually a certificate indicating he completed a brief Navy Reserve course allowing him to claim the title, Navy Reserve Lieutenant. His athletic career was limited to playing intramural football. The disgraced Texas Monthly once named him a "Rising Star" in of one of the magazine's paid-for, marketing sections. Consider yourself warned.
18 people found this helpful

Brian ButzReviewed in the United States on August 24, 2021
3.0 out of 5 stars
Well done, but anti-climactic
Verified purchase
This was well cast and well acted, but didn't really go anywhere. Despite being over 2 hours long, there really was very little information or plot provided in the film. Indy journalists were suspicious about why the administration was pushing for war in Iraq, and eventually find out they had good reason for their suspicions. There really isn't much story or character development beyond that for those who were paying attention at the time. For those who've been born after these events, none of it should be surprising because Trump had worse scandals almost weekly. This could have been a good story about the decline of reality in American politics, but it didn't actually get there. There could have been some monologues about the value of the first amendment and the duty of journalists to tell the truth, but it was lacking. Any one star review who says this was "biased' has no clue what actually happened and likely doesn't understand that vote counts get bigger when you count votes. Reality matters. The low reviews that say this was boring, I can respect. I gave this 3 stars because of the great cast and for being the start of a good movie, had it actually delivered this could have been 6 stars, but it didn't.
7 people found this helpful

MZ BLONDEReviewed in the United States on September 10, 2018
5.0 out of 5 stars
Excellent, well-crafted movie
Verified purchase
The journalists in this story based on true events do not write for the administration, they write for people whose kids get sent to war and die...must see.
23 people found this helpful

Kate McQueenReviewed in the United States on May 23, 2020
3.0 out of 5 stars
Lacks content and energy
Verified purchase
With the title "Shock and Awe" (yes, I know this was the name given to the Iraq war) I expected a lot more content and far better execution (let's make the comparison to what happened in Iraq: it started with a bang and left America hanging for 17 years---though the film was much shorter, thank God! When the movie was over, I thought..."but wait...that's it? " There were many more facts that surrounded the issue of whether or not Suddam Hussein had WMD's than were addressed in the movie.

The scripting and characterization was poor, to say the least. Occasionally, a character would make a claim about the Bush Administration without qualifying it. I watched the film to get more facts about the truth, once there was an investigation about why Bush believed Saddam had WMD's. No additional facts were provided.

WORSE, I had the impression early on that Rob Reiner did this movie as therapy for himself, which tended to show through more than a story he wanted to tell. He is known to have strong feelings about the Iraq war and other political issues, and casting himself as John Walcott didn't give him the opportunity to do so. In one scene, he referred to the Bush Administration as "d**kweeds. Really?? A few scenes were juvenile in the sense of name calling without providing the viewer an adequate background for the emotion. He would have done well to cast an actor (Tom Wilkinson would have been perfect) and remain behind the camera.

There were other issues, like the pointless characterization of the wife of Jonathan Landay as a paranoid women (played by Milo Jovovich) that nagged her husband about putting his family at risk while covering this story, since "they are listening!" Further, she appeared in three scenes that were all staged in the couple's bedroom, and all we could learn of her is that she is originally from a communist country and is a very paranoid woman! Could Reiner have shown us WHY he bothered casting this role if he had no plans of giving her depth? This added nothing to the film, and instead was a distraction.

Another scene that REALLY bothered me is when Warren Stroebel (played by James Marsden) gets into a poolside debate with his girlfriend's father due to his lack of patriotism in criticizing the Bush Administration over the Iraq War. When Warren has had enough, he pauses and says, "I'm going to get a beer..." because he couldn't think of what to say next.

The film is weak; as I stated in my headline, it lacked content and never built up the energy that helps instill interest from viewers. I still gave it three stars due to decent acting from Harrelson and Marsden. There's only so much you can do with what they were given.
9 people found this helpful
See all reviews
Back to top
Get to Know Us
Make Money with Us
Amazon Payment Products
Let Us Help You
EnglishChoose a language for shopping. United StatesChoose a country/region for shopping.
© 1996-2022, Amazon.com, Inc. or its affiliates