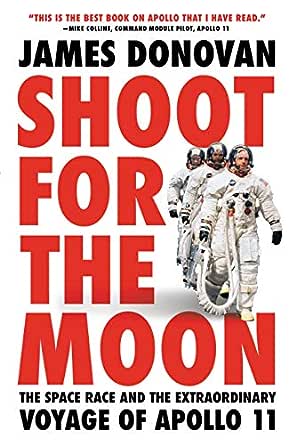 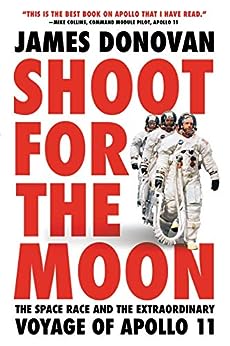 Shoot for the Moon: The Space Race and the Extraordinary Voyage of Apollo 11 Kindle Edition

One of Publishers Weekly's Best Books of 2019

"If you're looking for telling of the manned space program's story, you should start with James Donovan's Shoot for the Moon."―NPR

"Donovan's narrative is a well-crafted one...one of the best in print."―Science Magazine

"Donovan combines his masterful research skills and narrative gifts in recounting the full story of the most famous Apollo trip...Donovan's history is a powerfully written and irresistible celebration of the Apollo missions."―Booklist (starred review)

"Exceptionally researched, this exciting, sometimes harrowing book highlights the work not only of the pioneering astronauts but also of thousands of technicians and engineers. This is a perfect volume to commemorate the 50th anniversary of the first lunar landing and all that led up to it."― Publishers Weekly (starred)

"Shoot for the Moon is a gripping account of the dangers, the challenges, and the sheer determination that defined not only Apollo 11, but also the Mercury and Gemini missions that came before it."―BookPeople

"Its breadth and detail will give you a new appreciation for just how complex and dangerous this mission was. You'll come away marveling that, against all odds, we put people on the motherf**in' moon!"―Austin Chronicle

James Donovan is the author of the bestselling books The Blood of Heroes: The 13-Day Struggle for the Alamo -- and the Sacrifice That Forged a Nation and A Terrible Glory: Custer and the Little Bighorn -- the Last Great Battle of the American West. He lives in Dallas, Texas.

4.6 out of 5 stars
4.6 out of 5
132 customer ratings
How does Amazon calculate star ratings?
Amazon calculates a product’s star ratings based on a machine learned model instead of a raw data average. The model takes into account factors including the age of a rating, whether the ratings are from verified purchasers, and factors that establish reviewer trustworthiness.

Happy Camper
5.0 out of 5 stars Highly recommend
Reviewed in the United States on March 19, 2019
Verified Purchase
I'm more into history than science, and with the 50th anniversary of the Apollo 11 moon landing coming up, this feat definitely qualifies as history, even though I remember watching it as an 11yr. old kid on the B&W TV in the corner of our living room. The scientific details described here are understandable to--and appreciated by--this non-scientist. And I love the narrative style that reads like a good fiction novel. The hold-on-to-your-seats description of the actual moon landing had me doubting they'd make it even while knowing that they did. If you have any interest at all in the space race and Apollo 11, get this book. Command module pilot Michael Collins says it's "extensively researched and meticulously accurate" and he would be the person to know if any key detail is missing or inaccurate.
Read more
39 people found this helpful
Helpful
Comment Report abuse

Joe G. Bax
3.0 out of 5 stars Could have been better
Reviewed in the United States on April 7, 2019
Verified Purchase
Growing up in Houston during the Space Race, I was familiar with most of the story. That does not mean that a good story should not be retold. Most readers will recognize about 70% of the book. The author has done an excellent job of adding new information from Russia’s archives, and fleshing out the individual personalities of the astronauts. He has also placed certain Missions in the proper context. Americans had grow bored with flights that did not orbit the moon; yet Apollo 9 and 10 were very important to a successful lunar landing. The author explained that very well.

The sad part is that a magnificent story, well researched, gets muddled by the author and editor. Donovan has an interesting and sometimes odd way of describing things. It sometimes lacks polish. The more difficult problem is his constant use of run-on sentences. Sentences that run on for 5-7 lines of text are common. I do not think he is familiar with the use of a semicolon. One sentence covered ten lines of text. It had multiple parenthetical phrases separated, at times, by commas and at other times by dashes. You have to reread them and, even then, I was not sure the author intended the comment to be positive or negative. It creates a lot of ambiguity that a good editing could have corrected. There is a caption under a photo that reads “Aldrin takes the first step onto the moon’s surface.” Now unless you think the event occurred on a Disney sound stage, you know that Armstrong was the photographer. It should have said “Aldrin takes his first step onto the moon’s surface.” Donavan had gone into some detail about Armstrong got to be first. Why would you create an ambiguity now?

There is a good bit of discussion about NASA being a civilian and not a military program. Of course, we all know that NASA has had its share of military programs. Throughout the book army, navy and air force are not capitalized. In fact, they do not even merit a slot in the index. Given the patriotic nature of the event, I would have capitalized Army, Navy and Air Force and not treat them as common nouns.

It is a shame that a lack of editing got in the way of a good story. Maybe the publisher will see the wisdom of hiring a good proofreader and editor. Then, they would have a four or five star book.
Read more
36 people found this helpful
Helpful
Comment Report abuse

B. M. Howard
5.0 out of 5 stars An impressive book.
Reviewed in the United States on March 21, 2019
Verified Purchase
The Apollo program was vast and complicated, yet this absorbing narrative gets to the heart of the story and makes it human. James Donovan’s focus is on the men and women who gave their all to the mission, whether it be the countless technicians or the famous astronauts themselves. His writing is infused with energy and purpose—he has a great eye for detail and atmosphere, and the narrative never gets bogged down by the enormity of the mission. Every reader knows how this ends, but it takes a special author to make it suspenseful and interesting nonetheless. A spectacular read.
Read more
28 people found this helpful
Helpful
Comment Report abuse

P. H.
5.0 out of 5 stars Gracefully written
Reviewed in the United States on March 16, 2019
Verified Purchase
If you think you know this story or if you are new to it, you will be captivated by this gracefully written book. The research is impeccable, and the complicated scientific material rendered comprehensible to all by the author's straightforward and clear prose. This is a book worthy of the heroes who reached for the stars and left to their nation and the world a record of extraordinary achievement.
Read more
27 people found this helpful
Helpful
Comment Report abuse

roadrunner
5.0 out of 5 stars Superb research and writing!
Reviewed in the United States on March 30, 2019
Verified Purchase
If you know little or a lot about the U.S. space program, you will learn so much great history from reading this fine work. Wernher von Braun's escape from Hitler's SS troops and his work in America that advanced our rocket science twenty years. LBJ's outstanding leadership in forming our early space program. JFK's support and challenge that got us to the moon. How the original astronauts were selected., and the dangers and challenges they faced. Details of all the Mercury flights and the Apollo flights. How NASA headquarters was eventually located in Houston. Understandable dialogue of our advancing rocket science. How one man championed the Lunar Module idea and eventually won out on how our astronauts got safely to the moon and back to their space ship. All the details of how the U.S. trailed the Soviet space program, finally caught up, and surpassed it. What caused the downfall of Scott Carpenter's asteonaut career. So much drauma, adventure, dangers, and personalities, all based on incredible research. A must-read called the best book on Apollo by Mike Collins who was one of the Apollo Eleven astronauts.
Read more
22 people found this helpful
Helpful
Comment Report abuse
See all reviews from the United States

Brad H
4.0 out of 5 stars Good read
Reviewed in Canada on September 10, 2019
Verified Purchase
It moves at a clip, and really is about the space race from the beginning of manned flights to Apollo 11. Good overview of what it took to put people on the moon. Only criticism is it's a bit reverent to its subject.
Read more
Helpful
Sending feedback...
Thank you for your feedback.
Sorry, we failed to record your vote. Please try again
Report abuse

mjujazz1
5.0 out of 5 stars Well researched history of the space program
Reviewed in Canada on May 15, 2019
Verified Purchase
This is for all fans of space and the space programs of the U.S. and the Soviet Union.
Very well researched and so well written to keep the reader turning pages.
Read more
Helpful
Sending feedback...
Thank you for your feedback.
Sorry, we failed to record your vote. Please try again
Report abuse

Brian A. Belcher
5.0 out of 5 stars Very Good
Reviewed in Canada on June 17, 2019
Verified Purchase
This is a great read if your are interested in the space program, great value, prompt delivery
Read more
Helpful
Sending feedback...
Thank you for your feedback.
Sorry, we failed to record your vote. Please try again
Report abuse

mike paquette
5.0 out of 5 stars Interesting history.
Reviewed in Canada on April 9, 2019
Verified Purchase
This was very readable and enjoyable, kind of a cool look at what feels like a different time.
Read more
Helpful
Sending feedback...
Thank you for your feedback.
Sorry, we failed to record your vote. Please try again
Report abuse