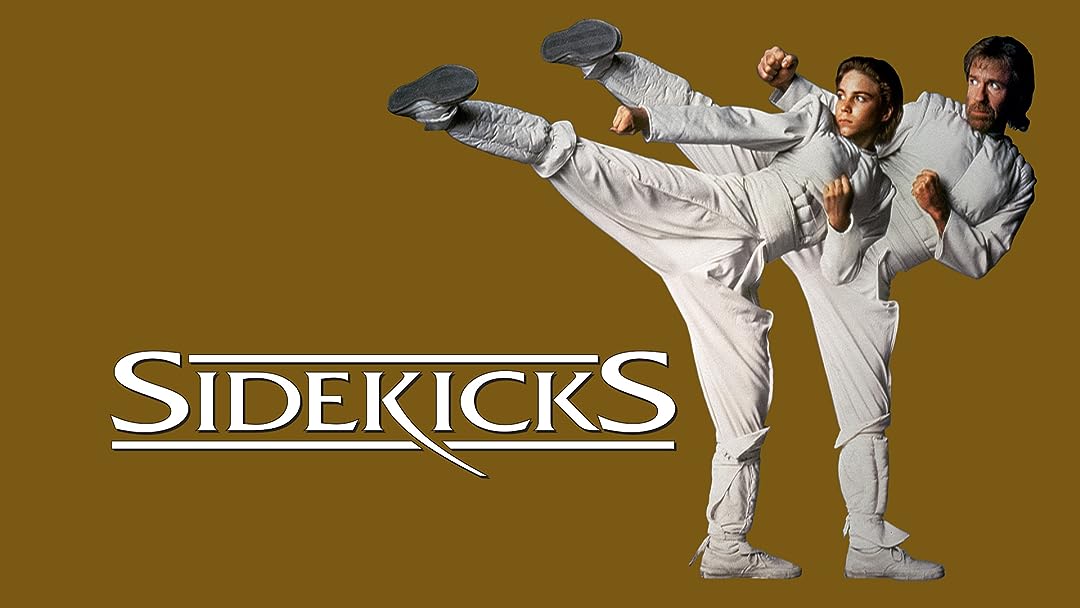 (84)5.21 h 40 min1992X-RayPG
Teenager Barry Gabrewski is a daydreamer. To escape his real life problems, Barry imagines himself the sidekick of his action hero, Chuck Norris in a series of high-octane adventures taken right out of his movies.

Joseph A. ArdineReviewed in the United States on August 8, 2021
3.0 out of 5 stars
Censored Garbage!
Verified purchase
I thought maybe the other reviewer was just watching the IMDB "free" version when he made the review on the ridiculous censorship. But sadly it applies to the purchased digital copies as well. I have been after Sidekicks forever. It drifted in obscurity for years only to be viewed in pirated form or on over priced backroom transfers.

So when it became available I jumped. What makes me mad is the unnecessary censorship. Sidekicks was typical 90's cheese. A great family friendly karate flick about persevering and never giving up, always following your dreams. You'd think a film like that, what's to censor?

Well apparently the powers that be felt they had to censor the film. One particular scene loses all impact due to this. A racist jerk in line behind Mako and another Asian guy is being - a racist jerk. He taps Mako on the shoulder and says something like "don't you chinks know there is no smoking"? The racist jerk then also calls Mako Charlie. The scene is handled well with Mako putting the guy in his place and a lesson is taught - don't be a racist jerk. The take away is that the guy saying the racist language is bad, it's not like he's framed in a good light! Is this frickin' lost on the censors?!

But when the scene is censored and the word chink is changed to chunk...it loses all meaning and impact. It becomes an idiotic and pointless scene.

This is where we are at. We are so afraid of words that valuable lessons are lost. What's the point? I thought the 90's wave of sanitization was bad, it's got nothing on the woke plague of the 2020's.

J. WestReviewed in the United States on August 13, 2021
5.0 out of 5 stars
"Bartender Make Mine Milk Too!!!"
Verified purchase
This is the funniest & martial arts film I've ever seen since T.M.N.T. (90'). It's just as good. Great acting. The storyline is about a kid name Barry (Jonathan Brandis) (R.I.P.) fantasizing a fan and hero Chuck Norris. As he wants to be a martial artist as Mr. Lee (Mako) (R.I.P.) teaches him. As Barry slowly gets involve with a girl at school name Lauren (Danica McKellar). Barry's father Jerry Gabrewski (Beau Bridges) make friends with Ms. Noreen (Julia Nickson). Barry gets bullied by Cellini but Barry stood up and show Cellini what Mr. Lee taught him. As Barry, Mr. Lee, Ms. Noreen and Jerry (Barry's father) join forces to face a tournament as Ms. Noreen ask Barry's greatest fan and hero to join their team. Great performances and roles by all the actors & actresses in the film. Highly recommend.
2 people found this helpful

Napoleon WilsonReviewed in the United States on August 26, 2021
4.0 out of 5 stars
Great, fun film...but this HD version is censored.
Verified purchase
When the guy at the elevator calls Mako a ch*nk and Mako says "since we all look so similar would you mind telling me which particular c*ink you are talking about"...the word ch*nk has been snowflake nerfed to sound like "chump". Makes we wonder what other things they have edited out for the sensitive wimps of the world. Something tells me undoctored VHS tapes and DVDs are going to be worth a fortune in the future. Let's hope when they get around to making a Blu Ray it will be uncucked.
4 people found this helpful

HippieFlowerChildReviewed in the United States on September 29, 2021
5.0 out of 5 stars
Sidekicks Movie Review 🎥 🥋
Verified purchase
Excellent movie. Love Jonathan Brandis and Chuck Norris, they made excellent chemistry on film. An entertaining movie and fun to watch. I admired the other actors and actresses as well. This movie is a true classic. I distinctly read a review that this film is reminiscent of the Karate Kid. They are true to their word. A movie I will watch over and over again.

JCampbellReviewed in the United States on July 28, 2021
5.0 out of 5 stars
Fun family oriented film for Chuck Norris.
Verified purchase
The real star of his film is young Jonathan Brandis, who sadly would take his own life at a very young age. Although Chuck, Julia Nickson, Joe Piscopo, and Mako (who was reuniting with Chuck on this film after first working with him on An Eye for an Eye in 1981) do a great job of giving Brandis a lot to work off of.
One person found this helpful

BrianReviewed in the United States on August 19, 2021
5.0 out of 5 stars
Seriously wholesome
Verified purchase
One of the best 90s movies, with loads of moral and ethical subtext great movie for any kid even though Chuck doesn't really fight much they probably couldn't afford the Insurance to do any big stunts or better fight scenes.

A. WALDEMARReviewed in the United States on October 20, 2015
5.0 out of 5 stars
Great product
Verified purchase
good dvd but for people who buy it in the usa you need a multi region dvd player. Every thing is written in Spanish once You get the main menu first button on left starts movie then first button to the right are the chapter points then one over lets you take the audio out of Spanish and put it in inglish then below on the same menu it lets you turn of the subtitles the words look like activate deactivate. Other then this it is a good buy.
2 people found this helpful

The BalanceReviewed in the United States on August 30, 2021
5.0 out of 5 stars
One of those movies from your childhood that's stupid and over the top, but still a blast!
Verified purchase
A cool story about a daydreamer and his idol. Unbelievable garbage, but of the highest caliber.
See all reviews
Back to top
Get to Know Us
Make Money with Us
Amazon Payment Products
Let Us Help You
EnglishChoose a language for shopping. United StatesChoose a country/region for shopping.
© 1996-2021, Amazon.com, Inc. or its affiliates