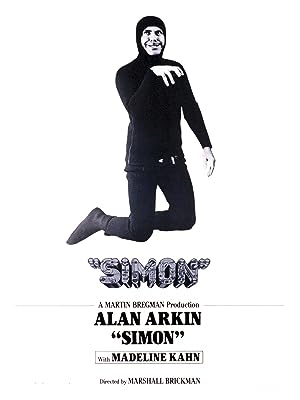 (56)6.41 h 37 min1980PG
When a group of scientists decide to create an alien, they choose Simon, a psychology professor, for the experiment. They brainwash him into believing he's an alien.

The concept: a bunch of brilliant but twisted minds who run a think tank with unlimited government money fill their time with odd schemes, like mating a man and a cockroach to build a super race, One bored day they get the idea of unleashing an ‘alien’ on America, just to see what happens. So they bring in small time collage professor Alan Arkin, and proceed to brainwash him into thinking he’s from outer space. Of course it gets out of hand, and they decide to have Simon killed, and the film becomes an odd long chase.

There are sequences that don’t work, the social satire feels a little soft, like it’s pulling its punches, and the ending just sort of peters out without making a lot of sense. But along the way there are some very, very funny lines from Brickman, and brilliant physical comedy bits from Arkin (including enacting 500 million years of evolution in 3 minutes).

Not really a ‘success’ as a film, but still better and smarter than 90% of the comedies Hollywood makes today, and certainly worthy of a better fate than it’s obscurity.

David E. BaldwinReviewed in the United States on December 23, 2015
2.0 out of 5 stars
For a Film About Smart People it's a Little Daft
Verified purchase
It appears that what first time director Marshall Brickman is attempting here is satire. What he's satirizing I haven't the foggiest. Brickman is all over the map taking shots at pop science, television, mass media, religion and elevator music but he has difficulty hitting the bull's eye. Ken Russell later in 1980 did a better job tackling the subject of immersion therapy and tapping into your primordial self with "Altered States". Alan Arkin does an adequate job in the title role but is ultimately let down by Brickman's unwieldy script. Madeline Kahn offers the best performance in an abbreviated turn as a saucy seductive scientist. I'd give the film points for its ambitions but ultimately it's a misfire.

Matt HarnickReviewed in the United States on August 30, 2009
5.0 out of 5 stars
One Of The Funniest Movies Ever Made!
Verified purchase
I remember 'Simon' fondly for two reasons. First, it was simply a wonderful comedy with a deeper message. Second, I knew many people in the cast personally. For example, the head of the Church of Television was played by Adolf Green who lived in the same elevator line in the building where I grew up. And this is the same man who co-wrote 'Singin' In The Rain'. Everyone of a certain age remembers Judi Grobart from 'The Electric Company'. Among other characters, she was Jennifer of the Jungle ("OYOYOYOYOYOYO!).

The film itself is about a man named Simon who is doing sensory deprivation research. An exclusive think-tank of the four most brilliant minds in the world invite him to become one of them, but with a sinister motive. They leave him in the tank for a full week and he emerges with a mind regressed to that of "a bacterium". Alan Arkin re[evolving to the human level is one of the funniest sequences ever filmed. While his mind is still maleable, the think-tank members brainwash Simon into believing that he is actually the child of extraterrestrial parents who are machines. After waking up from hypnosis, Simon tearfully declares "I'm a toaster!!". Simon is then used to start a kind of peace movement which gets way out of hand. His wife eventually breaks him out and things get really interesting. There is so much more to this film but I don't want to ruin it for you. The last thing I will say is Austin Pendleton stroking a computer shaped like a gigantic Princess phone with a sexy voice.

It has been a real disappointment to me that this film has yet to be released on DVD. Maybe if we all ask nicely? Or do we have to imitate Simon doing an impression of a jungle cat? Either way, this gem really ought to be transferred. And with as many extras as possible!!!

RarkmReviewed in the United States on June 2, 2015
5.0 out of 5 stars
A satire that should be better known
Verified purchase
This is a great movie, a satire of the type not often made today (society has gotten so weird that many people cannot tell when something IS satire, or it's so heavy handed that it's no longer funny). The production values were decent for the time, but wouldn't stand muster in today's hyper CGI environment. That some of the special effects were a little clunky even for the time is part of the joke. Some of the academic types resembled people I knew in the '70s and '80s -- the culture is different today, but I doubt whether academics and science has changed all that much. Would like to see a better mastering of the original film, but I doubt it will happen.

Joseph M. JacobsReviewed in the United States on August 21, 2012
3.0 out of 5 stars
"Simon" at last!
Verified purchase
An imaginative and well-acted little gem from 1980. I'd almost given up hope of ever finding this on DVD. Alan Arkin is priceless in the title role; the shots at American society/culture from the late 70's are sublime. HOWEVER, the disc has NO extras. Since when is closed captioning an extra? Newsflash to the manufacturers of this disc: Closed captioning is essential not just because there is an aging population who cannot hear as well as in earlier years, but also because sound gets muddled sometimes , or dialog is underspoken. Pity, the transfer to disc is clean and precise but leaving out the CC is a two star error. Get a clue, WB!
One person found this helpful

drbobertReviewed in the United States on September 9, 2021
5.0 out of 5 stars
Classic Alan Arkin
Verified purchase
Great Parody of Altered States with great actors.

MSMReviewed in the United States on January 7, 2020
5.0 out of 5 stars
Happy to find this!
Verified purchase
Loved this movie as a teen. Happy to have found it here.

Charles ThiesenReviewed in the United States on March 1, 2021
5.0 out of 5 stars
brilliant comedy poorly recognized
Verified purchase
It's a quirky satire with brilliant comics that surprises you in every scene.
See all reviews
Back to top
Get to Know Us
Make Money with Us
Amazon Payment Products
Let Us Help You
EnglishChoose a language for shopping. United StatesChoose a country/region for shopping.
© 1996-2021, Amazon.com, Inc. or its affiliates