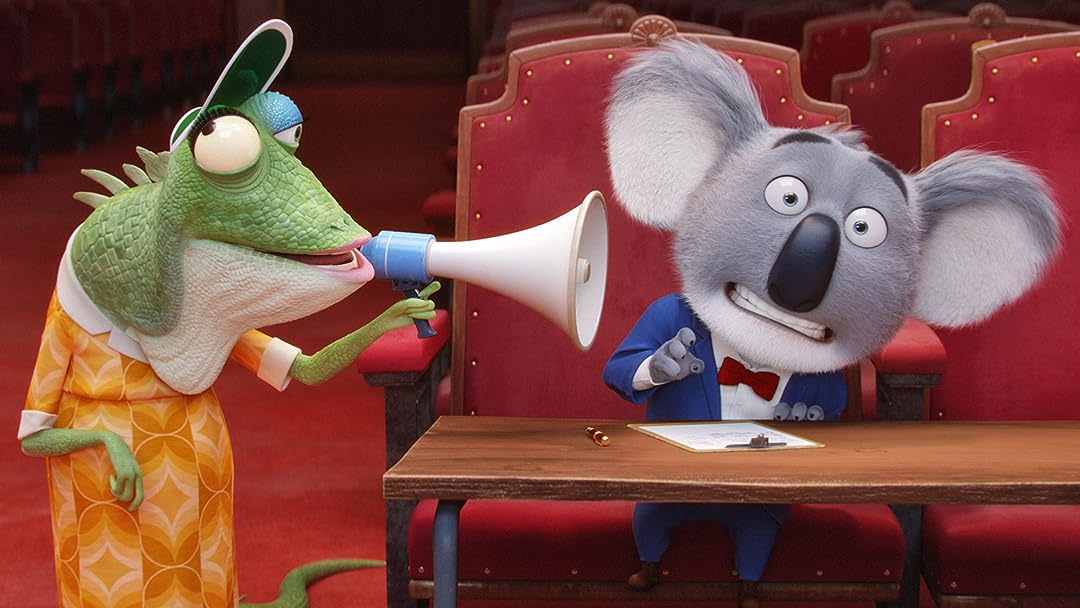 SybilReviewed in the United States on March 25, 2019
5.0 out of 5 stars
Best dancing pig on screen in.... FOREVER??!!!
Verified purchase
I laughed, I cried... it’s like nothing I ever watched before! and Miss Nana Noodleman you are my spirit aminal!!!!!!!!!!!!!!!!! *HUGS*....... My Queen!!!!!!!!! *KISSES* ....MY next Halloween costume!!!!!!!!!!!!!!!! *MUAH!* What a truly beautiful performance!!!!!!!!!!!! A singlarly unique voice stylized to perfection and almost poetic aroma to the ears!!!!! My review could never do her voice or character justice. I'm forever ruined!!!!!!!! Broke!! *HUGS** Johnnys performance was a close second!!! Taron Egerton has been rightly casted as Elton John in his coming bio. Mike's rendition of MY WAY was brilliant, second only to Sid Vicious. Pig mom was unforgettable, mesmerizing just glorious, even sexy,rRRrraarr! ;) Recommended.. I'm still so moved. This soundtrack was made just for me. *MORE HUGS* Only one other cartoon has ever so mammothly moved me to such gargantuan emotional manamimity ..

AngelaReviewed in the United States on April 22, 2018
1.0 out of 5 stars
COUNTERFEIT MOVIE-Will NOT play all songs
Verified purchase
DO NOT PURCHASE. The grandson and I were really into the movie when an error message kept popping uo. Went to the site and read the message it relayed and it is unauthorized recording of the movie. What a rip off coming from Amazon. Will be requesting a refund.
46 people found this helpful

JenniferReviewed in the United States on January 29, 2020
1.0 out of 5 stars
Counterfeit
Verified purchase
Looks like someone made this at their house. Not wrapped, looks counterfeit. Awful.
21 people found this helpful

Jamie needs to change to 5 starsReviewed in the United States on July 19, 2020
1.0 out of 5 stars
Very disappointed
Verified purchase
Waste of money. I bought it for my grandkids. When they actually 'Sing', the audio is muted, protected by Cinavia. I bought this from Amazon prime, never imagining the songs would be muted. This is the dumbest thing I have seen in a long time. Don't waste your money.
17 people found this helpful

Mrs. EntityReviewed in the United States on December 2, 2017
5.0 out of 5 stars
I love this movie!
Verified purchase
This is my new favorite movie. I could watch it over and over again! I love the performances and the characters! I identify with Rosita and Meena--oh man, I had such stage fright when I was younger. Near the end, when she was standing in the corner, saying, "I can't move!" I almost started to cry--I know exactly how that feels, and Moon was right. Once you start singing, it gets easier. I loved Rosita's impromptu performance in the grocery store. And the song over the credits is great! I can't think of anything I don't like about this movie. Some of the shots look so much like live action--very well done. I love all the extras. I bought the soundtrack CD so I could sing along in the car. So if you see some chubby, middle-aged woman driving along blasting "Bamboleo" and doing a little car seat dance, it'll likely be me.
20 people found this helpful

The_PhantomReviewed in the United States on May 17, 2018
5.0 out of 5 stars
Great Family Movie, especially on long trips in the Family Van
Verified purchase
We take a number of family trips in our family van which has a built in DVD player for the passengers in the back. My kids have watched this movie multiple times and as a result, as the driver, I have listened to it multiple times (Seen it twice). I have yet to tire of this particular movie and my kids still like it a LOT, too (Ages 5 & 8 now, girls). They love the singing and the story and so do I. I definitely recommend this movie if your family is into music and singing shows (American Idol, The Voice, The Sing Off, America's Got Talent, etc).
20 people found this helpful

James W. AndersonReviewed in the United States on July 6, 2017
4.0 out of 5 stars
Music for all ages, safe for kids, and a simple, plausible story. Good entertainment!
Verified purchase
We bought this for our kids, ages 4 and 7, and they love it. They've watched it countless times, I catch them singing bits and pieces of the songs in the car and, because the songs are pop songs from the 80s, 90s and today, there's something in there for parents to enjoy, too.

The story is simple enough--a struggling theatrical producer launches a talent show to increase business for the theater, and his receptionist accidentally puts a few too many zeros on the grand prize amount, which attracts everyone from miles around to compete. The range of music runs the gamut from pop to rock to even a couple classic Frank Sinatry/Rat Pack tunes from the 50s. I can only think of one scene that could be considered inappropriate for kids, when these three girls are singing the opening lines to "Baby Got Back" (they repeat "oh my gosh, look at her butt"). As long as you don't think your kids won't latch on to that and sing it at the most inopportune time, the movie is otherwise completely safe for kids of all ages. No cursing, no violence, and no sexual innuendo, real or implied.

Perhaps the best result of all is that both my boys are now much more interested in music. They're interested in playing with my electronic keyboard, and I hear them actually trying to sing in the car now. Even though my wife and I have exposed them to music since before they were born, they didn't take much interest in singing or playing music until they watched this movie. So who knows, maybe this will unleash the musician in your child, too.

Miss Josh EmmettReviewed in the United States on July 7, 2021
5.0 out of 5 stars
NOT A RIP-OFF, MUSIC PLAYS LOUD AND PROUD!
Verified purchase
I loved this movie. I laughed, I cried, I sang along.

It runs perfectly in full color with all the songs playing. What is with the other reviews? They should not be on top on the first page!

Reminds me of Mickey Rooney and Judy Garland..."we can save the (fill-it-in)! Let's put on a show!"

The songs run the gamut from Sinatra to Katy Perry. Songs everyone knows and you can start singing along right away. The animation is spot-on. After a while, like watching the Muppets, you forget the characters aren't human!

Get your kids, get your friends, get the neighbors, get the popcorn...do a party watch together (after Covid 19) or have everyone start watching together from their homes and party down!
One person found this helpful
See all reviews
Back to top
Get to Know Us
Make Money with Us
Amazon Payment Products
Let Us Help You
EnglishChoose a language for shopping. United StatesChoose a country/region for shopping.
© 1996-2022, Amazon.com, Inc. or its affiliates