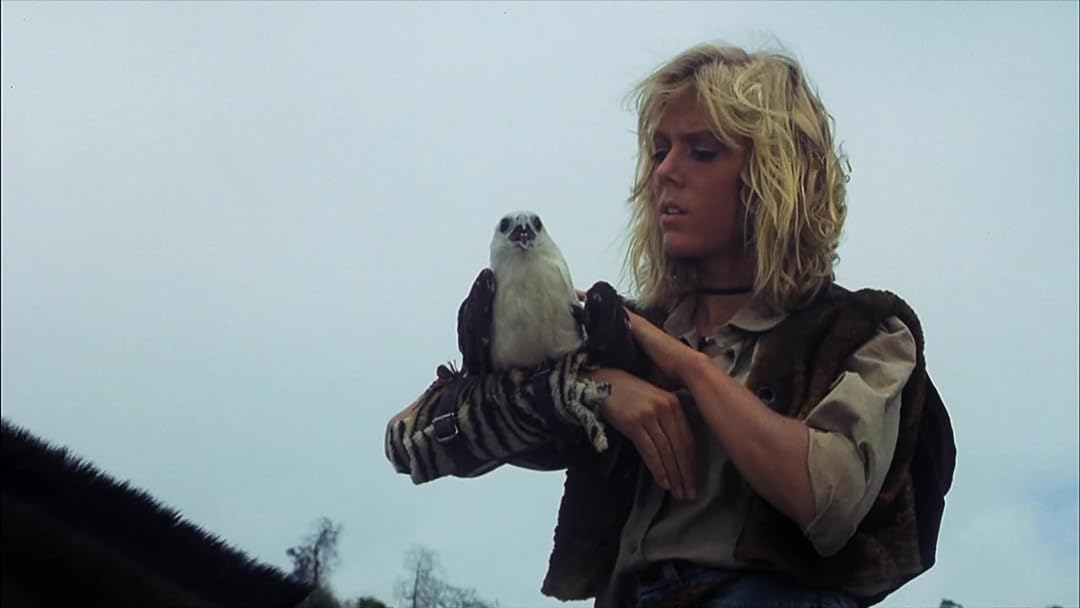 (41)
3.61 h 32 min1988R
The year is 2021 AD. Women have been enslaved by a brutal army of men who survived the nuclear holocaust. Their only hope for freedom is in the hands of a nomadic band of fierce she-warriors: The Sisterhood.

joe rReviewed in the United States on December 2, 2018
3.0 out of 5 stars
Yes. There's tits (Spoiler)
Verified purchase
Fun little post apocalyptic sword and sorcery thing, with hot chicks swinging swords and sorcerizing. Don't ask questions like "Why didn't she shoot those hot blue lasers out of them big blue eyes and get away from the guy that had her chained to his bike?
Or "What advantage do two girls armed with M-16's have over 20 guys who also have M-16's?"
And, when Earth Goddess Mother finally shows up to save the day, and asks "Why do you go back to the old ways of weapons and violence, instead of trusting Me?" none of her disciples say "Uhhhh... Because we've been here for 6 months chained to this wall while Aqualung and his band of merry men were making us their play doh, and you've been sitting on your mountain top contemplating your no doubt shapely navel?" (Earth Goddess Mother doesn't take her shirt off for us.)
But, there's worse ways to spend an idle hour and a half or so.

Raid BlunderReviewed in the United States on April 24, 2019
1.0 out of 5 stars
It's bad.
Verified purchase
Well I got through roughly 50% and asked myself why am I watching this. Was it because of the hairy guys with metal plates on their chests, driving around in the wrecked cars on invisible gasoline? Or because they raided some people for car parts? And the latter who were dressed in sandbags? Or the bad swordsmanship scenes? Heck there wasn't even much for mysoginists -just a flash of some smaller boobs during a bubble bath. When the Bad Guys were raiding the Sandbag People, there was one guy standing up in a car, screaming with both arms over his head. And the other one who was repeatedly shooting the same RPG. Man the acting was so bad that I could have played in it, but it wouldn't have been possible to keep a straight face. Zero plot. Zero acting. Pathetic special effects. I hope they found their spare car parts.
One last question: how do I remove this film from my list of "favorites"?
8 people found this helpful

AzoicReviewed in the United States on December 28, 2020
1.0 out of 5 stars
If you're looking for a time-waster, this is it.
Verified purchase
Look, there's a pandemic. I'm retired. I have Amazon Prime and no other online or broadcast source. I watch what I can get.

The Sisterhood had almost no plot, mediocre acting, and a bare bones background score. If there were exciting moments, they must have been in between the bland moments and I missed them.

There are worse films, but why search? If you found this one, watch it and suffer.

Avid readerReviewed in the United States on January 12, 2021
1.0 out of 5 stars
To appreciate good movies
Verified purchase
Movies like this are useful, as they allow one to better appreciate a decent movie when they see it, as this certainly isn’t one. In truth, I bailed early on. Terrible acting, terrible script, and yes, being able to shot blue rays out of ones eyes may be useful, but it doesn’t compensate for the garbage that is on the screen. There are much better sword and sandal type films that are a lot more fun to waste one’s time on. And even desolate after war films with bands of survivors have been done better. At least have some decent sword play. I was a bit surprised to see where it was filmed.

DarkTardReviewed in the United States on March 3, 2020
1.0 out of 5 stars
Better With Beer
Verified purchase
I gave this one star because I laughed many times through this and mostly it was because I was feeling good with beer inside me. Without drinking, I probably wouldn't have made it through the first ten minutes. Oh yeah, the one star was because there isn't a half-star rating system here.
3 people found this helpful

Michael F SchultzReviewed in the United States on June 7, 2019
3.0 out of 5 stars
not very good.
Verified purchase
If it wasn't for the few brief topless scenes, this movie wouldn't be worth watching. Seems to be shot nearly entirely in one old gravel pit.
3 people found this helpful

Samantha CapertonReviewed in the United States on February 17, 2019
5.0 out of 5 stars
Pretty damn good...
Verified purchase
Once you get past a bit of bland opening production... you realize its an action movie with babes and also a manly action anti-hero. Once you get to the end of the movie you realize that this movie could have possibly been the inspiration for any number of Action, RPG, and Strategy games. Not to spoil too much but there's scenes that could be a Fallout entrance to a shelter, a feeling of discovering a Pre war Star League level of tech cache discovered, with a lot of Mad Max muckery. 5 stars.
3 people found this helpful
See all reviews
Back to top
Get to Know Us
Make Money with Us
Amazon Payment Products
Let Us Help You
EnglishChoose a language for shopping. United StatesChoose a country/region for shopping.
© 1996-2021, Amazon.com, Inc. or its affiliates