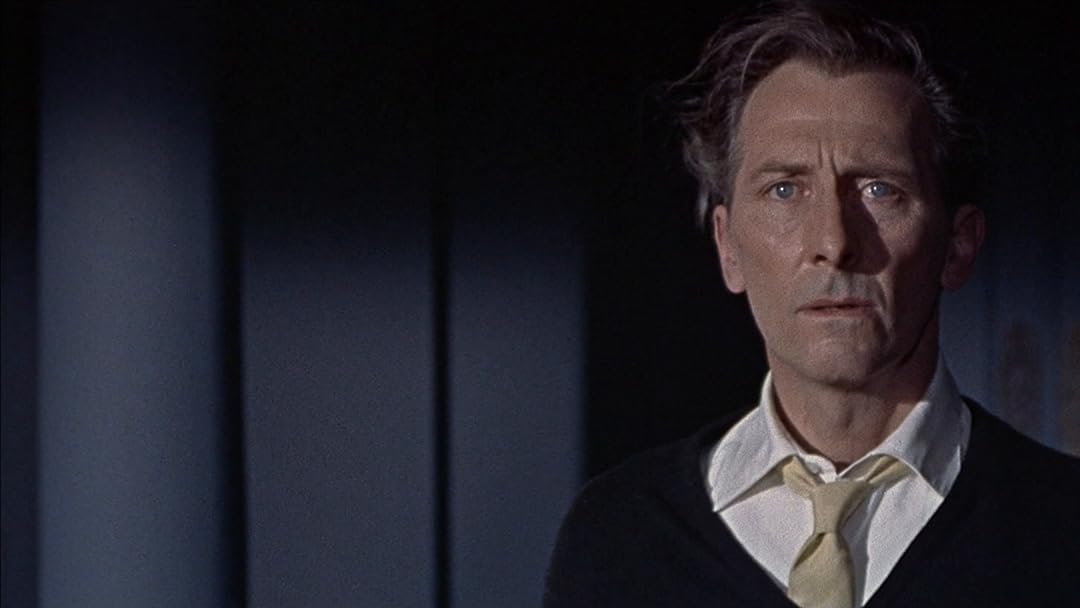 (372)
6.21 h 23 min1965R
A professor who collects items dealing with the occult is caught up in the terrifying machinations of the skull of the notorious French Marquis de Sad

BENJAMIN MILERReviewed in the United States on November 10, 2004
4.0 out of 5 stars
Amusing late-night type of horror film
Verified purchase
The Skull is a 1965 adaptation of a 1946 Robert Bloch short story The Skull of the Marquis de Sade. The film starred Peter Cushing and Christopher Lee, with a cast of unknown (at least to me) actors. Despite the actors involved, this is not a Hammer film, but an Amicus production, in which this was their second production (Dr. Terror's House of Horrors was the first).

I first seen this film on the USA Network as a teenager back in the late 1980s, but since that time I hadn't seen it, until I purchased the VHS.

This film involves two wealthy London antiques collectors, Christopher Maitland (Peter Cushing) and Sir Matthew Phillips (Christopher Lee). Phillips warns Mr. Maitland to keep away from the skull of the Marquis de Sade, but he wouldn't listen. Maitland's wife, Jane Maitland (played by Jill Bennett) also warns him about the dangers he's getting himself in, but to no avail. Mr. Maitland acquires questionable artifacts from a questionable person named Mr. Anthony Marco, including a book on the Marquis de Sade which is bound in human skin, and plus the skull of the Marquis de Sade. As it turns out the Marquis was possessed and the possession continues long after his death. The skull is possessed and influences whoever owns the skull to do evil things against their free will, and that's what happens to Christopher Maitland.

What is really silly is some of the scenes where the skull is floating and you can see wires attached. Also when the skull floats, it looks like a different skull, as if it was made of clay than a real skull.

If you like those late-night horror films like what you remember seeing late at night on TV, this is a great one to see.

Dennis GarrettReviewed in the United States on February 13, 2015
5.0 out of 5 stars
4 Demon Statues!!::)~
Verified purchase
This is one of the best movies I have ever seen!!! They could of made the move plot go in three different directions. In stead they gave the
the movies plot to Peter Cushing. And wrote out a unique set of scenes for him. You see chistopher Lee in the movie too! But has a more limited role in the movie. At one point in the movie all the colors in a minor way start to stand out in Cushings curio Library and start to move and swirl around in a few patterns. And had the look of the lighting and background of the old tv shows Dark Shadows or so it seemed to be. The only thing they can do now in the future is make the prequel to this movie where they tell the story about the 4 demon statues.. The skull and one of the statues have a great scene with Peter. Where the skull floats through the air for some magical reason. For some reason Peter Cushing has passed away some time in the year 1994 although it really seems like it was in the early 1980s. If you want a good movie and want to study Peters movies this would be the one to start with. You never will see anything like it again. The DVD has the same cover picture on it. And a small background song. No extra footage or interviews on this Dvd. You really should buy two of these dvds incase something happens to the first one. Dont know how long they will be around.
7 people found this helpful

joel wingReviewed in the United States on November 12, 2020
3.0 out of 5 stars
Amicus Productions put this out to challenge Hammer's monopoly on British horror
Verified purchase
A 1960s British horror film with Peter Cushing and Christopher Lee that wasn’t made by Hammer films? This was put out by Amicus Productions which tried to challenge Hammer at its own game. The style of the film is almost exactly the same as a Hammer release.

The Skull is about Cushing as Dr. Christopher Maitland an occult researcher. He buys the cursed skull of the Marquis de Sade which of course starts driving him mad. Like a Hammer film there’s nothing really scary about the story. Rather it’s all about setting the right mood which it accomplishes. Maitland for example gets sucked deeper and deeper into his research that you can tell it’s not going to end well.

Paul Ess.Reviewed in the United States on September 7, 2008
4.0 out of 5 stars
Get Ahead
Verified purchase
For the life of me, I can never work out why 'the Skull' isn't better thought of across the horror world.
It's moody, got inclusively great performances and a brash, kickin' soundtrack.

Cast-wise, it's nigh on untouchable: Peter Cushing plays Maitland, a fool-hardy collector of occult 'curios' who comes to own the possessed skull of the Marquis de Sade, Patrick Wymark is brilliantly squalid as the shady antiques dealer, Marco, Christopher Lee and Peter Woodthorpe make telling cameo-appearances, and the deeply sexy (and good actress(!)) Jill Bennett plays Cushing's terrified wife, pushed to her limit by his obsession.
It's got Hammer-esque cemetery scenes, bulging-eyed insanity murders, a brilliantly trippy dream sequence where Cushing is forced to play Russian Roulette in a mad courthouse, and a devilish, grinning titular villain that floats around his front parlour very stylishly - even with a vicious letter-opener rammed in it's eye.

There may well be typically cryptic 60's drug metaphors abounding(I can sense them, but I'm damned if I can coherently uncover one for you), but that's not why 'the Skull' is so watch-able and entertaining.

It's a combination job, and with all it's component parts firing so finely, it can't do much else but work beautifully.
It's an elegant film, totally out of sync with many of its rivals and peers of the brash, boundary-pushing 1960's. Hopefully, this long overdue dvd release will redress the balance in 'the Skull's favour, and bring it to a modern audience, it's unavailability being the only reason I can see why its not being hailed.
13 people found this helpful

Matthias WächterReviewed in the United States on February 23, 2007
5.0 out of 5 stars
Amicus,Cushing and Lee-a triumph
Verified purchase
This till today underrated Low budget horror film of

Hammers great rival Amicus has deserved to be called a

classic a long time ago!!!

With the little possibilitys he had at his dispoal director

live through the evil ghost of its dead "owner"!

The formal qualities of "The Skull" are excellent on every

Direction,photographie,sets and acting are on the highest

Its really its actors which give the film its greatest effect.

Peter Cushing gives a absolutely virtuoso performance as it

You can only say : With films like "The Skull" Amicus

establised themselves more and more as a potential rival for

Hammer in the horror film business!!

And as we all know,there woulb be soon films like "Torture garden",

"The house that dripped bllood" or "Tales from the Crypt".

So,Hammer had to watch out!
7 people found this helpful

PulpmanReviewed in the United States on October 16, 2012
4.0 out of 5 stars
Freddie Francis gets it done!
Verified purchase
This is a fun movie and very well done. It is the perfect movie for those who like shivers but are put off by the over use of gore.
It is an Amicus film but uses Hammer people and it shows in a positive way. Peter Cushing and Christopher Lee are on hand and add style and class to the production. Freddie Francis was a two time academy award winning cammera man is at the helm. He is one of the most under rated horror directors from the 60s and 70s. If you are into Hammer you know he did some of The Dracs and Franks with Lee and Cushing. He lso did a few anthologies for Amicus.
This movie is a feature film and that is rare for Amicus but this is a well done chiller. Lee and Cushing are a treat to watch and the film is deftly directed.
3 people found this helpful

Forest NymphReviewed in the United States on November 1, 2020
3.0 out of 5 stars
Ok. Kinda Boring.
Verified purchase
This seems promising on the surface, an atmospheric English tale based in the legend of the Marquis de Sade, but it just ends up with some guy casually murdering people who inconvenience him in a really quick and relatively non-sadistic way so it doesn't even live up to the hype of the skull's effect on people. It's not just that, I'm not really a gore hound, it's just that the story is slow and doesn't make much sense. Meh.

Paul S. PersonReviewed in the United States on February 21, 2021
3.0 out of 5 stars
Mediocre
Verified purchase
Yes, you have great horror film stars.
Yes, you have a Skull that kills people.
But, no, that doesn't make this anything special.
It doesn't make it bad, either.
If you really like old horror films, you may find this one worth watching.
See all reviews
Back to top
Get to Know Us
Make Money with Us
Amazon Payment Products
Let Us Help You
EnglishChoose a language for shopping. United StatesChoose a country/region for shopping.
© 1996-2022, Amazon.com, Inc. or its affiliates