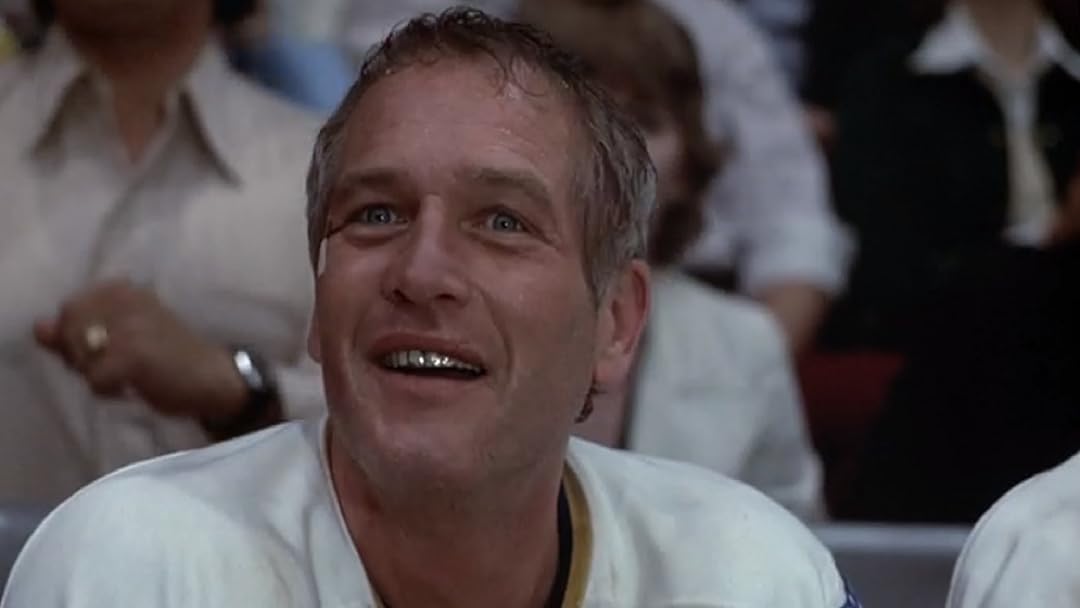 Michelle BellomaReviewed in the United States on December 3, 2016
5.0 out of 5 stars
A must see for the ANY sports fan!
Verified purchase
What can I say?!?! A classic!! A classic for sports. A classic for hockey. A classic for classics!! Not that I'm biased, but here's a few simple facts: 1) I was a hockey mom for over 10 years, 2) I'm still a HUGE hockey fan...go Rangers!!! 3) I live in Syracuse (where part of the movie was filmed), 4) ESPN ranked Slap Shot in the top 5 of **all time** top rated sports movies (right up there with Rudy), 5) It's got the "Hanson" brothers (played by the two real life Carlson brothers-the third brother was drafted to CHL before filming began, Paul Newman AND stripping on ice!!! And 6) you have true hockey as it was before all the political P.C./B.S. started. Let's face the facts....it's just a movie with seeing, theres action, drama, romance, lots of comedy and of course HOCKEY!!! Truly a great movie for any sports lover!
35 people found this helpful

GrinderCBReviewed in the United States on October 24, 2016
5.0 out of 5 stars
Sports Classic
Verified purchase
Hard to believe that "Slap Shot" stars Paul Newman ("The Hustler," "Butch Cassidy & The Sundance Kid," "Cool Hand Luke," et al.) and was directed by George Roy Hill ("Butch Cassidy...," "The Sting," etc) but this movie has gone down as one of the most classic sports films of all time. Good movie to watch at the start of the hockey season. It follows the antics of a last place minor league hockey team in an industrial city experiencing factory closures and economic problems. The team, the Charlestown Chiefs of the Federal League, lead by aging player-coach Reggie Dunlop (Newman) discovers that "gooning it up" by fighting and playing dirty leads to winning and sellouts. Amidst all this Dunlop plants rumors of the sale of the team, untrue but for the fact that the players start winning in an effort to help the sale. Side stories include the Chiefs' young star player who refuses to fight and his wife who finds hockey life beneath her, Dunlop's efforts to rekindle with his estranged hair-stylist wife, and Reggie's efforts to keep the Hanson brothers out of jail, and figuring out how to keep his failing hockey career going a bit longer. This is not a har-har funny film and the language alone makes it unsuitable for kids but overall if you like hockey and/or sports movies then Slap Shot is a must, especially if you never saw it before.
10 people found this helpful

joel wingReviewed in the United States on November 3, 2021
4.0 out of 5 stars
Was laughing out loud as the Hanson brothers bring chaos to the hockey rink
Verified purchase
If you enjoyed Will Farrell’s Semi-Pro then you’ll like Slap Shot. It was released 30 years before but it’s the exact same concept. It features a washed up minor league hockey team that’s struggling financially. Paul Newman comes up with a plan to pay the bills. The team is full of characters and go through a number of mishaps.

The story starts off straight forward but then halfway through three brothers who the team thinks are mentally handicapped bring the chaos and things become hilarious. I was laughing out loud. There’s a lot of 70s swag as well such as Newman walking around in a brown leather outfit. It’s definitely one of the great sports films of all time.

Double DReviewed in the United States on October 7, 2016
5.0 out of 5 stars
#1 Sports Comedy of All-Time!
Verified purchase
Slap Shot is the greatest hockey movie of all time. While it goes over the top, it actually captures what it's like playing on a team traveling regularly (cards, gambling, goofing around in the hotel, girls, etc.). Paul Newman's vintage 70s clothes and car are worth watching alone. But the dialogue is hilarious and quotable like Caddy Shack and Animal House. The soundtrack is also straight out of the 70s as well and will get you dancing in your living room. This is right on par or better (because I'm a hockey player) than Caddy Shack, Animal House, and Bad News Bears. And also better than modern classics, which are more politically correct, like Tin Cup, and Happy Gilmore. Bottom line, if you like sports comedies and you've not seen this, shame on you!
8 people found this helpful

Allen JacksonReviewed in the United States on October 26, 2013
5.0 out of 5 stars
Beautiful blu-ray picture and sound; classic film!
Verified purchase
This review is for the Slap Shot blu-ray.

A classic film, still fresh and funny to this day, as well as very realistic. Evokes a lot of sadness, too, re: small industrial towns with their industries going out of business (sound familiar lately?), and the ripple effects on interdependent people and businesses.

Truly a poignant film throughout, a quality which, for some reason, is generally not discussed-- as this movie revolves around an aging hockey player-coach with a dead marriage, the failing marriage of his young best player, that player's overall philosophic unhappiness with life (same for his alcoholic wife), the "we're going nowhere" feelings of basically all the players on the team (if not the league), false hopes of a new beginning for the team in another town under financially viable new owners, and more. This movie is about way more than just the funny (and violent) deeds of the Hanson brothers.

One of the best 1970s films, which is saying a lot. Great cast-- Paul Newman (in one of his best roles), Strother Martin, Michael Ontkean (also in one of his best performances), Lindsey Crouse, Jerry Houser, and M. Emmett Walsh, among others. Stays fresh and relevant with every viewing.

The blu-ray picture is excellent for this time period. As is the sound. The extras are the same as on the 25th Anniversary edition DVD.

Highly-recommended blu-ray on all fronts!

Bobby NewmanReviewed in the United States on June 15, 2015
5.0 out of 5 stars
My favorite movie when I was a kid, holds up well
Verified purchase
Slap Shot is the story of the Charlestown Chiefs, a minor league hockey team that is on its way out of existence. The town they call home is losing its main source of employment, and prospects look bleak for this losing team. Aging player/coach Reg Dunlap (Paul Newman) realizes he has to do something to save the team and perhaps attract a buyer. He begins flirting with a more theatrical "pro wrestling" style of trash talking and play, a move that is solidified with the unlikely appearance and brutal play of the now legendary Hanson brothers. As one of their own teammates put it when the Hansons first hit the ice, "these guys are an effing disgrace!" All but one of the Chiefs (their most talented player) embrace the new style and the team makes a turnaround. In the end, they must all confront the decisions they have made. There is a fair amount of crude humor and mindless violent comedy, but that is all part of the fun. The 1970s fashions are something to see as well. While the movie is well-acted and has some very powerful scenes, don't go into this expecting Hamlet and you will enjoy.
6 people found this helpful

Texas momReviewed in the United States on October 3, 2019
5.0 out of 5 stars
How did I miss this in the theaters!!! NOT for kids though. Highly recommend.
Verified purchase
Wow, now this is a FUN movie. NOT for kids. Period. Adult themes. You don't need to be an ice hockey fan to enjoy this crazy trip. I saw this late night on TV, and then bought it so my adult family members could see it. This is a keeper.
4 people found this helpful

Movies Are CinemaReviewed in the United States on March 13, 2021
5.0 out of 5 stars
OMG! I Forgot How Funny This Film Is!!!
Verified purchase
Such a classic comedy with excellent acting, not only by Paul Newman, but the entire cast! Great characters in this hilarious film about a Hockey player-coach who attempts to save a minor league hockey team from shutting down. Not just full of comedy and funny characters, there are sub-plots pertaining to relationships between men and women. I was glad I bought the Blu Ray to enjoy many times more.
See all reviews
Back to top
Get to Know Us
Make Money with Us
Amazon Payment Products
Let Us Help You
EnglishChoose a language for shopping. United StatesChoose a country/region for shopping.
© 1996-2022, Amazon.com, Inc. or its affiliates