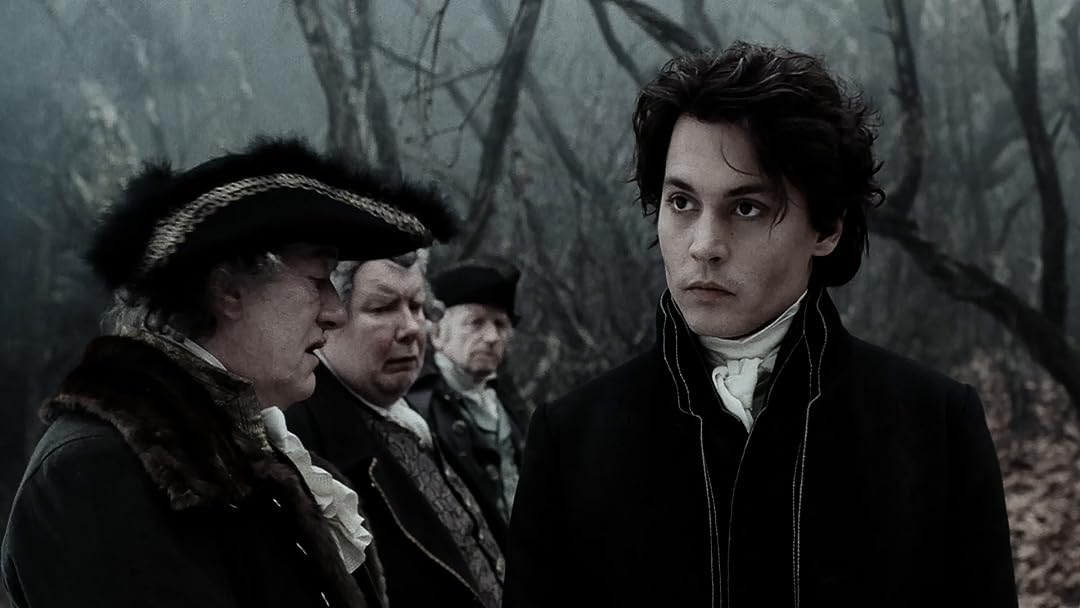 (9,213)
7.31 h 45 min1999X-RayR
Director Tim Burton's eerie vision of the classic horror tale about a curious investigator probing a series of murders in colonial New York that seem to be the work of a vengeful, headless phantom.

John P. SalvaggioReviewed in the United States on September 29, 2019
2.0 out of 5 stars
20th anniversary edition. Overall Disappointing.
Verified purchase
the disc is EXACTLY THE SAME, as previous blu-ray release. menu and features the same. no 4K upgrade. I uploaded a photo of the old disc next to the new one (left side). the case, overall construction is abysmal, the cheapest cardboard they could have used it arrived dented on the corners, and a large scratch down the back. see images. As I already own the original book, the book included is, at medium level inspection, accurate and unabridged, however I don't really care about it (again because I own a nice hardcover of the original book anyway)- no points for that. The cover art is the only PRO of this version. it is nice cover art, not great. could have been far more creative. the art behind the disc is, in my opinion, the nicest. the background is more of a mirrored silver than it is white, in the factory image it appears white- which would have been nicer. the book is also peppered with corresponding screenshots of the film, which in my opinion, make it more cheesy. I would have preferred more updated features, perhaps a steenbok treatment, this is one of my favorite films. I also attached an image of the rear page giving info compared with the rear of the previous version, as you can see, the feature list is the same. If you do not have the previous version, it is worth it- otherwise not. If this film IS given the steel book treatment, prob for the 30- if there are even still blu-ray's in 10 years, I will get that. and do another comparison review. 2/10.
49 people found this helpful

ConsumerReviewed in the United States on July 14, 2019
1.0 out of 5 stars
Tim Burtshyte
Verified purchase
Thematically bizarre. Ichabod Crane, the main character played by Johnny Depp, is a buffoonish coward, there is no reason to like him. His over-the-top obsession with apothecarianism and occultic lore make him lose credibility as the "man of science" and "brilliant investigator" that he claims he is. Anything favorable that happens to him in the story is explained as supernatural or dumb-found luck. He's basically stumbling through a series of events and making irrational "deductions" to drive the plot and explain to the audience what is taking place (because it is not clearly obvious). The over the top Tim Burton trademarks are littered throughout this movie, including some insanely cheesy CGI effects. What would otherwise be an interesting twist on a classic spooky tale is simply ruined by Hollywooding it to being boring non-sense with pretty faces and big names in the lead roles.
21 people found this helpful

TherewolfReviewed in the United States on March 30, 2017
5.0 out of 5 stars
Spooky sweet
Verified purchase
Absolutely wonderful in a classic Tim Burton sort of way. Very far removed from the original story, which is not much of a story to begin with; the only similarities that I see between Washington Irving and the film is the existence of a newcomer from the city, a pumpkin head prank used to deter lovelorn Ichabod who is anything but attractive in the book, and of course, the unbelievably stunning gothic scenery that comes alive in most Burton's films and is very well described by Irving. Starkly beautiful dream sequences, brilliantly matched colours, costumes and atmosphere, great performances and Depp's sense of humour add to the beauty of this excellently directed film; it's infinitely stylish, spooky in the best classic horror way, romantic and boasts wonderful actor lineup. Somebody mentioned they didn't like Christopher Walken as the horseman; I on the other hand can't imagine a better choice than perfectly otherworldly, vampiric-looking Walken for this role. I love to watch it on a rainy night, it's such a well-written, gorgeous murder mystery scary-tale, you just can't beat it.
46 people found this helpful

joel wingReviewed in the United States on February 27, 2020
4.0 out of 5 stars
Burton does great job with classic Sleepy Hollow story part mystery part horror
Verified purchase
Sleepy Hollow was Tim Burton’s take on the famous Legend of Sleepy Hollow short story featuring the Headless Horseman and Ichabod Crane. If there was ever a story Burton was born for it’s Sleepy Hollow. His love of the macabre and dark themes meant he did a fantastic job.

Burton made the movie part procedural whodonit and part thriller-horror. Crane questions the townsfolk, goes through their records, and examines the victim’s bodies to try to figure out who the Headless Horseman is. The Horseman himself emerges from a tree full of blood and severs the heads of the leading townsfolk one after another. It turns out the story is one about a conspiracy and revenge.

Christopher Walken as the Horseman does a great job. He doesn't get to do anything but kill people and scream and growl, but it is impressive. His facial expressions portray a real evil. Depp has a strong performance as well. He’s part bumbler part detective. They give some background to him as well and his dealings with the occult.

Burton should be commended for Sleepy Hollow. It was the perfect outlet for his unique vision of movies.
C

coloringyourvisionReviewed in the United States on May 20, 2022
5.0 out of 5 stars
I have had to buy the dvd twice because I wore out the first one...
Verified purchase
I have had to buy this dvd twice because I wore out the first one. I really like this movie. It is a go-to for when I just want some background noise to lull me to sleep. I have tried to sleep without sound, and it is impossible. I need something to tune out to shut down my brain, and Sleepy Hollow does just that. It isn't so much JD that I like, it is all of the other characters that keep me intrigued. I do not think it should have cost $100 million dollars to make, but what do I know. It isn't AT ALL scary! But there is something about it that draws me in. As I said, the supporting characters make the film. Honestly, they could have dropped anybody into the role of Ichabod, and I would still like the flick. Overall, not a bad way to spend a couple of hours, with popcorn and raspberry lemonade.
5 people found this helpful

Timothy R.Reviewed in the United States on August 31, 2019
1.0 out of 5 stars
Incoherent nonsense
Verified purchase
This is the weirdest movie. It has nothing in common with the book other than the names of a few characters and the setting, other than that all the characters act far different from their novel counterparts.
The movie is very dark, as in black and white in about half the scenes.
The camera jumped about like mad so I cannot even tell what is happening during more than one part, and it's so dark I cannot tell who is getting killed, or if there're alive.
Some parts were just weird and disconnected, Ichabod falls asleep (I think) and there are about three scenes with a woman in a blue dress dancing, and him as a young boy in a grove surrounded by cherry blossoms???
Katrina Van Winkle is a witch, like a sorta good witch??
Her step mother is a bad witch related to a witch out in the woods that is her sister, and their mother was also a witch who taught them witchcraft and then she sees the headless horseman being buried and then takes the skull and then uses that to do a inheritance with a rich farmer. (I think, they showed this is less than three minutes)
I don't know who is dead, some of the people start to kill each other and the jumpy camera makes it really hard to see who is dead.
They also copied a few scenes from the much better Disney animated cartoon. They even had Ichabod landing on the horse backward, right out of the cartoon.

Bad movie, bad plot, bad camera, bad cinematography, bad acting bad producer, just avoid, unless you want the music, which is the best thing, that is at best mediocre.
Written by my daughter. I thought it was bad as well.
10 people found this helpful

Goth Gone GreyReviewed in the United States on June 3, 2022
3.0 out of 5 stars
Pros and cons
Verified purchase
A friend recommended this based on the soundtrack, cinematography, and costuming. I added my personal liking for Johnny Depp, Christina Ricci, and other actors listed and was very much looking forward to viewing it.

(Also, yes, I am very behind in my movie viewing.)

I'd like to say that everything lived up to my expectations... (in best Michael Gambon voice:) Alas...

It's been quite a while since I saw the familiar story - and by that I firmly mean Disney's version. Tim Burton's work is decidedly darker and weirder. As much as I'd like to say that it worked here? It didn't.

The plot is rambling and weird, the occult vs faith too bold, and after watching I'm still not entirely sure what happened. Johnny's wide eyed yet knowledgeable inspector falls flat, and Christina Ricci just... is. The costuming, and music are lovely, but the excess gore for sake of gore seems over the top. There are plenty of other movies with the same actors that I enjoy more, I'll stick with those rather than this one.
One person found this helpful

tomReviewed in the United States on May 28, 2022
5.0 out of 5 stars
good movie
Verified purchase
This is one of the few Johnny deep movies i like he was great in this movie the whole cast was good it was a good story the actors chosen for this movie did a great jobs with their roles .
5 people found this helpful
See all reviews
Back to top
Get to Know Us
Make Money with Us
Amazon Payment Products
Let Us Help You
EnglishChoose a language for shopping. United StatesChoose a country/region for shopping.
© 1996-2022, Amazon.com, Inc. or its affiliates