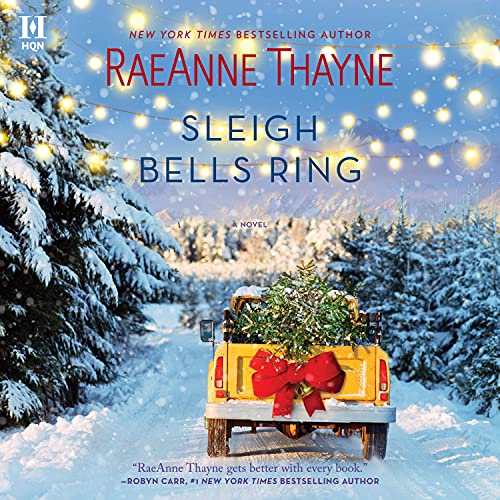 Celebrate the season with this sparkling and heartwarming holiday romance that proves sometimes all you need is a little Christmas magic....

Angel’s View Ranch has always been special to Annelise McCade. Once upon a time, it was her family’s land, until her grandfather sold it to billionaire Wallace Sheridan. Now employed as the live-in caretaker, Annie is just trying to make it through the holidays with both her sanity and her niece's and nephew’s faith in the magic of Christmas intact.

The six-year-old twins recently lost their mother, so Annie tells herself it wouldn’t be a problem to bring them to Angel’s View. Why should it be? The Sheridans haven’t visited in years, not since Wallace died. They would never know the twins were there...until Tate Sheridan shows up out of the blue two weeks before Christmas.

Crushed to learn that Tate is there to sell his grandfather’s property - and mortified that her secret guests have been discovered - Annie offers her resignation. But Tate asks them to stay and help him get the house ready for one last family Christmas before it’s put on the market.

Annie and Tate have three days to work their magic before the Sheridan clan arrives - and to work through the growing attraction between them. But Annie simply can’t fall for the man who will put her out of a job and a home. Still, the sparkle of the season is impossible to deny...and this Christmas has surprises in store for everyone.

Special invitation from Audible!
Learn more about Membership
List Price: $30.79
You Save: $3.85 (13%)
By completing your purchase, you agree to Audible’s Conditions Of Use
Sold and delivered by Audible, an Amazon company
Share

4.7 out of 5 stars
4.7 out of 5
595 global ratings
How are ratings calculated?
To calculate the overall star rating and percentage breakdown by star, we don’t use a simple average. Instead, our system considers things like how recent a review is and if the reviewer bought the item on Amazon. It also analyzes reviews to verify trustworthiness.

NanaCav
5.0 out of 5 stars ** Sweet holiday romance **
Reviewed in the United States on November 17, 2021
Verified Purchase
Annalisa McDade had been close to Wallace Sheridan until his death. She lived at Angel's View Ranch and helped in running the ranch. The McDade's and the Sheridan's were closely connected. She knew that the ranch would now be sold and she had nowhere to go. She received word that the whole family was coming to spend the holidays one last time. She knew she would have her work cut out for their arrival.

The only family Analise had was her brother Wes and he was a mess. The previous year Wes' wife passed away and sent him off the deep end. After so many run-ins with the law he was sentenced to thirty days in the county jail. They all lived in a small, close knit town and the judge was hoping that being away from his two children during the holidays would be a wake-up call.

And that is just the beginning. I really can't write more without spoilers. I loved the whole family and friends and ranch help. They each made quite a contribution to the story. RaeAnne Thayne never disappoints. I loved every minute of this book and didn't want it to end.
Read more
Helpful
Report abuse

Virginia Koch
5.0 out of 5 stars I wanted something to read to get my mind off the events going on in this country and so decided A Christmas novel would fit the bill.
Reviewed in the United States on November 10, 2021
Verified Purchase
This book was perfect! I’ve always enjoyed RaeAnne Thane’s novels and this one was perfect. Christmas has always been A happy time of year for me and all the events and love in this story were just what I needed. I hated to come to the end but it was inevitable and now I have A lot to think on. Her characters were all engaging and delightful. Such A lot of love!
Read more
One person found this helpful
Helpful
Report abuse

Dana Wright
5.0 out of 5 stars Christmas romance.
Reviewed in the United States on October 26, 2021
Verified Purchase
Sleigh Bell Rings by RaeAnne Thayne is a wonderful Christmas story. So much love in this story. RaeAnne Thayne is a wonderful writer. She use very descriptive words to describe the places you are. I can picture the place in the story and the quilts she makes for children in crisis. I love all of RaeAnne Thayne’s books but Christmas books are my favorite. So much Kindness, love and joy in this book. Read the book you will love it.
Read more
Helpful
Report abuse

Kindle Customer
5.0 out of 5 stars A Wonderful Book!
Reviewed in the United States on November 8, 2021
Verified Purchase
I loved reading this book it was all about family, Christmas, Horses, Falling In Love. The Children in this book were so special even though their Dad was incarsated. I have read many of this wonderful Authors books and lived all of them.
Read more
One person found this helpful
Helpful
Report abuse

mary behan
5.0 out of 5 stars Beautiful
Reviewed in the United States on November 9, 2021
Verified Purchase
Heartwarming story about families that brings home the beauty of Christmas. I loved the interaction between generations and families who learn to live together again after all their losses. Raeanne Thayne never disappoints, just love her beautiful love stories
Read more
Helpful
Report abuse

Charles L. Doughty
5.0 out of 5 stars A sweet story with happy endings on many levels! Miracles brought about by love! Loved it
Reviewed in the United States on November 1, 2021
Verified Purchase
Life has really bad things happen, not all really karma. The damage can last for so long! This story shows us how the strength of family, can be so powerful, in healing! The results, here and real life, can be amazing.
Read more
Helpful
Report abuse

Diane
5.0 out of 5 stars Excellent
Reviewed in the United States on October 30, 2021
Verified Purchase
Such a good happy story in the end. I really liked these characters and the plot. It's a shame real people can't be like these characters. I so look forward to reading more from Thayne.
Read more
Helpful
Report abuse
See all reviews

Greta Garbo
5.0 out of 5 stars Sleigh Bells Ring
Reviewed in Canada on November 26, 2021
Verified Purchase
Good read! Nice Christmas story.
Read more
Report abuse
See all reviews
Back to top
Get to Know Us
Make Money with Us
Amazon Payment Products
Let Us Help You
EnglishChoose a language for shopping. United StatesChoose a country/region for shopping.
© 1996-2021, Amazon.com, Inc. or its affiliates