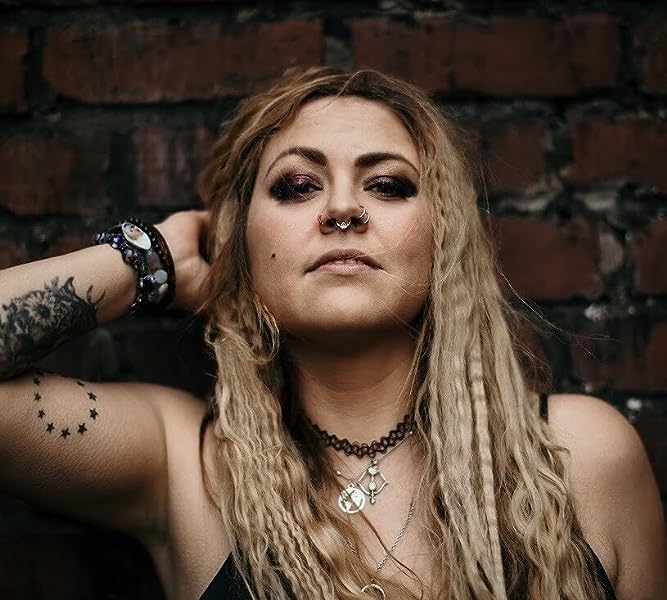 by Joanne Askew (Author)
5.0 out of 5 stars 3 ratings
See all formats and editions
Sorry, there was a problem loading this page. Try again.

Britain is rotting. Sloth has taken over the land. Natali and her wife, Lana, must raise their heart rates every three hours or the Sloth virus will slow their hearts to nothing. But Natali faces more than Sloth. She faces the depression her wife is consumed by, the loss of their child, and soon they must face a new presence on Britain's decaying roads. There are voices that yell through the silent night and gunfire that echoes from the skeletons of a society in ruins.

Joanne Askew is a Science-Fiction and Horror writer. She explores mental health issues, sexual identity, femininity and neurodiversity through speculative fiction. As an LGBTQIA+ activist, she believes that fiction will make our world a better place to come out in. She strives for more queer representation in media, particularly speculative fiction, and highlights social injustices like inner-city poverty, the justice system and mental health representation. Joanne has OCD but battles her compulsions to make sure she uses them as a superpower in an empowering way.

Joanne Askew is a Science Fiction and Horror writer. She explores mental health issues, sexual identity, and disability through sci-fi and horror. As an LGBTQIA+ activist, she believes that fiction will make our world a better place to come out in. www.jaskewauthor.com

Richard
5.0 out of 5 stars An Apocalypse You Don't Want To Miss
Reviewed in the United States 🇺🇸 on January 26, 2022
Sloth by Joanne Askew is my introduction to this author’s work. I will be reading more. In 2022 I’m looking to read more diversely, which I try to do already. A gap in my reading is LGBTQ+ fiction. This is the post-apocalyptic book I never knew I wanted, and once I got it, I didn’t want it to end. The review below will contain spoilers, but if you want my short and sweet opinions on the matter, here you go: Joanne Askew crafts a bleak post-apocalyptic England and focuses on a lesbian couple named Tali and Lana. These two characters are amazing and Askew shows a strength for character work throughout this novella. If you want gay horror, strong characters, and a bleak setting, buy this book ASAP. For my deeper thoughts, they follow below.

We’re introduced to Tali and Lana after a disease called Sloth has taken its toll on their personal lives and the lives of everyone in the UK, and maybe even the world. Tali and Lana find someone who is slowly dying from this sickness. They decide to put this person out of their misery. Sloth is a disease which has affected everybody, and it only takes over your body after you’ve rested or had a regulated heartbeat for more than 3 hours. The younger can survive longer because of their heartbeats. However, those who are older need to keep active or they will die. Before Sloth took over the UK, Tali and Lana were able to get married. Lana has a child named Cain and everything is great until Sloth comes into play. Cain ends up losing the battle to Sloth, and they agree to put him out of his misery. Lana and Tali are still grappling with the loss of their child, especially Lana, who is growing weary of the constant fight to live. What follows is a moving exploration of guilt, depression, exploration, and the struggle to stand up and live for yourself.

One of the major themes that this novella is tackling is homophobia, as well as the patriarchy trying to assert its control over women. Within the novella, people blame the LGBTQ+ community for Sloth, similar to how they have blamed the LGBTQ+ community for real life epidemics. Lana herself also must deal with depression brought on by the loss of her child. Tali supports Lana every way she can, but the hole Cain’s loss has caused is way too big to fill. The novella also deals with class and society issues. Askew shows us a scene where English men with posh accents are holding a safari and hunting down survivors they come across in the streets. It’s a cynical and grim world, but it also feels grounded in reality.

The strongest aspect of this novel is realized in both its grim setting, but also the relationship between Tali and Lana. There is so much love between these two, as well as so much pain. They leapt off the page and felt alive. I applaud Askew for her portrayal of this couple. Tali and Lana invested me as a couple the entire time. I found the book to be impossible to put down. If you’re a reader who cares a lot about character development and character relationships, I implore you to buy a copy of this book ASAP. You will not be disappointed. I feel guilty that this book slipped under my radar in 2021 because it is such a fantastic book.

Give this book a read, let its characters grow and speak to you and I guarantee you will rave about this book as much as I am. Also, don’t forget to smash the patriarchy.