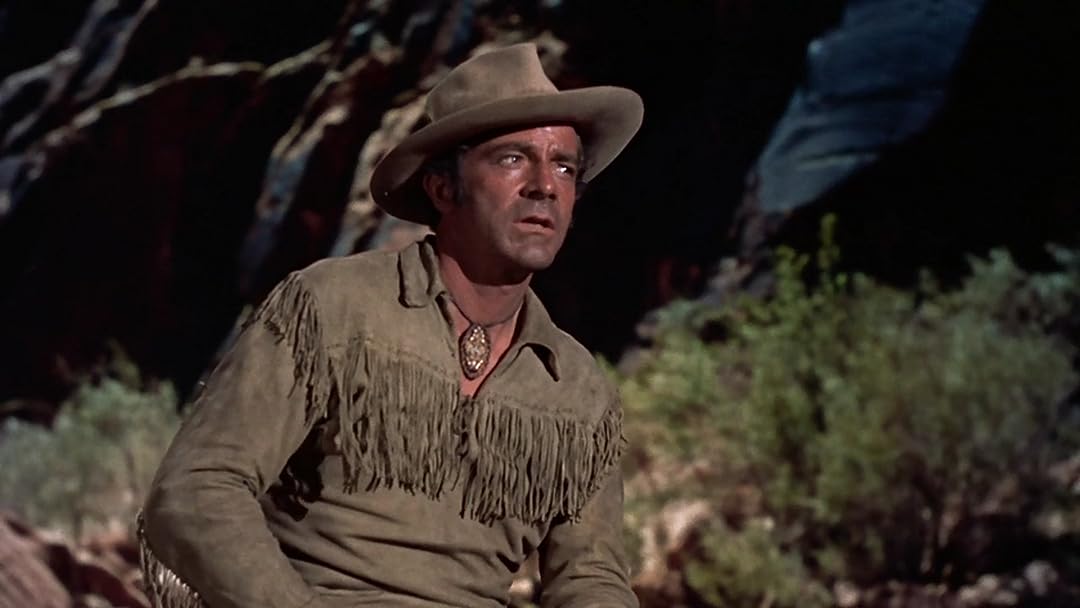 (27)
6.21 h 28 min19557+
A cavalry rides into a new post to find it being attacked by Indians. Survivors escape by flatboat, taking a dangerous trek down the Colorado River.

Jo YoungReviewed in the United States on June 27, 2021
2.0 out of 5 stars
Only watch if you get for free
Verified purchase
It's hard to know where to begin with the list of implausible situations and tired old tropes that litter this movie. It is entirely possible that US Forts in the Utah territory kept boats on hand (for a river that no one seems to have wanted to navigate) and perhaps the Ute Indians were so terrified of the river that the mere mention of being cast into it cased them to blurb out all their plans - but it all seems terribly convenient. It also stretches credulity that the Native Americans would have followed the boats all along the route of the river - only shooting at the soldiers every now and again - but not be around where the boats hit shallows and had to be portaged overland. And don't get me started on the last few minutes of the movie with Apaches on one side and the cavalry neatly lined up on the other.

The movie has the Captain whose judgement is clouded by loss and who may or may not be guilty of deliberating sending one of his men (Milburn Stone) to his death in order to not have him testify at a trail in a manner against the Captain's wishes for revenge on the Dana Andrews character. There are a large number of soldiers whose numbers are whittled down until it almost seems like they might have been better off staying in the fort and taking their chances. The majority of the soldiers who actually make it onto the river are slowly killed off after their character(s) drives the plot ever so slowly forward. There is a love triangle between Dana Andrews ('the hero'), Piper Laurie (the daughter of the man who caused the hero to be placed in an impossible situation) and Rex Reason (a sadistic jerk who becomes homicidal out of rejection). This could have been interesting but, try as Laurie and Andrews might, there's not a flicker of believable spark between them. And script aside, the costuming of the female character is so historically inaccurate and just plain bad it is distracting.

I'm not even wild about the overall 'look' of the movie although there are some occasionally lovely scenes of the river canyon. The two star rating is because even though the movie was a howler of contrived situations, I obviously stuck with it so something about the chase kept me involved. Plus, the cast was a marvel of 1950s talent and some of the actors - Milburn Stone in particular - brought real depth to their roles. It wasn't the worst western I had ever seen, but coming right after "My Darling Clementine," it certainly fell short of being the best.

Edward J. Erler Jr.Reviewed in the United States on July 8, 2018
5.0 out of 5 stars
Good Old-Fashion Exciting Western
Verified purchase
I saw this when I was a kid and really liked it. Good cavalry and Indian adventure from 1955. Still just as good as I remembered it. If you like older westerns (no cussin', no nudity, no gore) this is good family fare. Great outdoor scenery and exciting escape down some awesome rapids. Good plot and good cast.
One person found this helpful

The CinemaScope CatReviewed in the United States on March 1, 2011
4.0 out of 5 stars
Adventure down the Colorado river
Verified purchase
After a massacre at their fort by Ute Indians, a small handful of surviving soldiers plus a prisoner (Dana Andrews) awaiting court martial, a girl (Piper Laurie) and a skin hunter (Douglas Spencer) flee in canoes down the treacherous, uncharted Colorado river in an escape attempt. Thus, the film becomes more of an adventure than a traditional western as the bulk of the film takes place on the river. While the locations (Utah and Arizona) are lend authenticity to the film, the majority of the river rapids sequences are obviously done in a studio against projected backdrops which lessens the excitement. Still, some suspense is generated, not only by the "will they or will they not make it" plot but also by the tension between Andrews and the martinet Captain (William Talman) determined to bring Andrews through to court martial. Perhaps it is a routine western but it's compact and efficient and successfully completes its modest ambitions. Directed by Jerry Hopper and with Rex Reason (as Laurie's slimy fiancee), Robert J. Wilke, Milburn Stone and William Schallert. A western that I think non-western fans might enjoy even more than western fans.

Infortunately, the Suevia DVD from Spain isn't in its intended wide screen ratio (1.85) which makes the framing tight but eminently watchable.
One person found this helpful