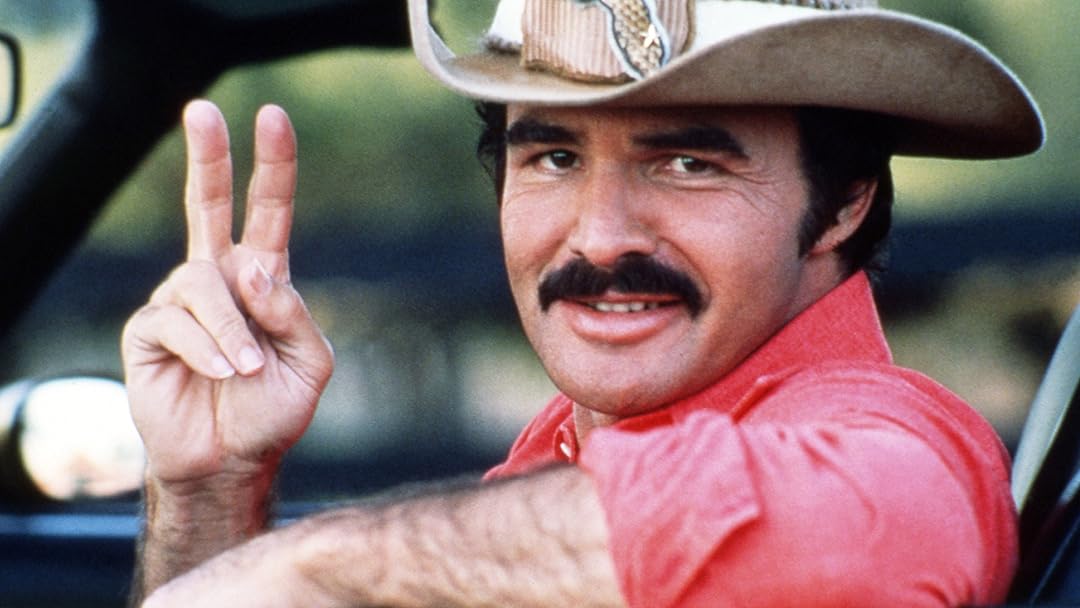 Smokey and the Bandit

(12,667)
6.91 h 35 min1977X-RayHDRUHDPG
Burt Reynolds, Sally Field and Jackie Gleason are in high gear and hot water after a cross-country road challenge results in one of the wildest series of car chases and crashes ever filmed!

KittyReviewed in the United States on September 7, 2018
5.0 out of 5 stars
Bandit
Verified purchase
In honor of Burt Reynolds since he passed away today, I wanted to watch this movie again. It was so funny and adventurous.

Back in the 1970s, movie theaters had no closed-caption (CC). I didn't understand what the dialogue is saying because I am deaf. Now I am happy that this Amazon Prime video has added up with CC that made me understanding. Thanks to Amazon Prime Video. Now, I know why those funny guys who escape from Texas cops. LOL!

RIP Burt Reynolds. You will be missed by great fans including me.

Ben30Reviewed in the United States on July 11, 2017
5.0 out of 5 stars
BUY THE NEW 40TH ANNIVERSARY EDITION WORTH BUYING FOR SURE
Verified purchase
Smokey and the bandit has been reissued again by universal this time as a 40th anniversary
the HD transfer & 5.1 master mix and the extras are exactly the same as the previous 2012 blu-ray
so what makes this new reissue different from the 2012 blu-ray
is the new Documentary THE BANDIT goes for 83min which covers mainly Hal needham as a stunt man
turned Director for smokey and the bandit who also did the Car stunts in the film except for the Football field stunt
which an accident did happen and 2 people were injured, but most of the car scenes Burt was driving
the Doco covers both Hal & burt's relationship from when they met in the early 70's right thru to 1977 when smokey become a big Hit
you have new interviews with Burt reynolds plus archive Burt interviews aswell,
there's also recent interview footage of Hal needham before he passed in 2013 & archive Hal interviews to
there's also interviews with Hal needham's son, there's interviews with Universal producers Mort engelberg & Robert Levy
and Linda McClure who had small acting role in the film
worth watching for sure, it's the first official Doco about Hal & Burt together making smokey and the bandit
tragically Hal needham passed away back in 2013
this 40th anniversary has also been reissued on dvd aswell which has the same contents as the new blu-ray reissue
the only difference is the films picture quality which is only Digital remaster, not HD quality and the sound is only 5.1 Dolby
so up to you, you decide whether to buy the new blu-ray or dvd reissue of the film
5 stars i give for the new blu-ray reissue based on the new Doco THE BANDIT

John WernerReviewed in the United States on September 15, 2018
5.0 out of 5 stars
Punches So Far Above It's Humbleness & Is Still A Joy To Watch
Verified purchase
Being appreciative of Amazon making this movie available at this time I thought it warranted comment. This is a classic B-movie comedy that punches above due to to three men: Burt Reynolds, Jerry Reed, and "The Great One" Jackie Gleeson. What we have here is....a total disrespect for the Hollywood comic method, then and now. And it scored then and is still a hoot to watch. Reynolds perfected the art of never taking a performance so serious as to suck the life out of it as is in constant evidence here. You didn't have to be a southerner to find plenty of laughs. It's a kind of Americana red-neck pop art that won't die because all of the humor is good natured and supremely rooted in reality. Reynolds just has to show up because this fit his persona quite like a hand in glove. He's at his totally assured smart-aleck best. Jerry Reed not only is the perfect side-kick, but his song nailed the whole affair like few, save Dolly Parton, could. Then there is the "silver bullet" (not the newer watery Coors) of Jackie Gleeson. It's incomprehensible that any other actor could have brought the whole chase home like his Buford T. Justice. Then there's the supporting cast of Sally Fields, Pat McCormick, and Paul Williams who ice the cake with a rich frosting that just ticks all the little extra boxes, especially Fields who no one would have likely guesses would have been such gold in such a role. There won't be such PC incorrect comedies ever made again, with such a sweet core, as five decades have obliterated the fact that good comedy pokes fun without condoning or disparaging. That is why it is such a great film that still works today and is actually a minor masterpiece. Burt was an American iconic actor and this is Burt just being Burt! RIP, you gave us many great moments on screen and other wise.
27 people found this helpful

MeemeReviewed in the United States on August 17, 2021
1.0 out of 5 stars
5 * For Entertainment; MINUS 10 For Language
Verified purchase
Ratings mean nothing anymore. PG rating for an R language. Glad I previewed it before watching it with the kids. Car chases great and fun along the Dukes of Hazard line---but more of it and better. But the language was extremely offensive from start to finish. I don't understand why the ONLY bad offensive word to the raters of movies is the F word, because there are a LOT of others out there, including (and especially), the profanity of using the names of Jesus and God throughout---AND in the harshest forms. I don't want to be bombarded with this for one and a half hours. Right from the first minute to the last.

Jackie Gleason and Jerry Reed stole the show and I wanted to give a 5 star for that. But I resent being force-fed non-stop foul and trashy gutter language in order to get a laugh. I especially hate the fact Hollywood deceives the public with false ratings in order to make a buck. I do not recommend this movie.
4 people found this helpful

SpacemanDougReviewed in the United States on November 3, 2017
5.0 out of 5 stars
40th Anniversary Edition is a must for fans of this classic film
Verified purchase
We FINALLY get the original mono soundtrack on this release, something that has never been on the format for this movie previously. Since the 2006 DVD release, it has only been the 5.1 remix available which had re-recorded sound effects along with a few omissions. The only DVD releases with the mono soundtrack are the 1998 and 2004, and from what I hear the video quality isn't that good. So kudos to Universal for finally giving this movie the definitive blu ray release. Other great things about this release is the HD remaster still looks great and all the special features from the original blu ray release have been carried over. This is definitely a 5 star product from Universal, something that's quite rare for their catalog blu ray releases.
22 people found this helpful

MarionReviewed in the United States on September 4, 2018
5.0 out of 5 stars
Clear Story Telling. Brilliant On Screen Chemistry. Great Original Songs
Verified purchase
This isn't exactly film literature, but it's got a strong cast and a bunch of amazing character actors. Itturns out Burt Reynolds has great taste and was responsible for a lot of the casting ideas. Fun and harmless film. There was a major interest at the time in CB (citizens band) radios and in being able to communicate while on the road.
The special trucker lingo was a minor amusement for a few years, but certain expressions from that era are still used. Most especially, "put the pedal to the metal"
12 people found this helpful

Zachary LittrellReviewed in the United States on November 30, 2018
5.0 out of 5 stars
Guaranteed to make you want to become a trucker
Verified purchase
It ain't high art, but it's for sure a helluva lotta fun! No matter how old you are, anyone and everyone is fascinated by the idea of just hitting the road, taking on a CB handle, and idling down the highway at 100+ MPH. The Bandit is a lovable scoundrel, Sheriff Buford is an irascible man of (questionable) law, Frog's the plucky damsel, Snow the sidekick, and Fred is a basset hound, exactly the even keel sorta dog needed for a high speed adventure.

What I'm saying is that this is not a complicated movie, but I'm glad for that. The Bandit and Snow have a simple goal of getting a load of Coors to Atlanta, and Sheriff Buford's goal is even simpler: rip the Bandit a new one...if he can just catch him. There's catchy tunes, playful flirting between Frog and Bandit.

As though the movie doesn't give a rat's tail what critics think about it. It wants you to curl up with your Frog or your Bandit (or your Fred) on the couch and escape down classic American highways.
2 people found this helpful

SupergooseReviewed in the United States on August 19, 2021
4.0 out of 5 stars
A bit cornier than I remember.
Verified purchase
Sally Field, Burt Reynolds and the Great One?How could it not be good? It’s still a fun watch after all these years and it’s an interesting glimpse back at the 1970s’ fascination with CB radios and truckers. (Still not sure what that was all about) I enjoyed it immensely but the jokes can be a bit difficult for someone who didn’t grow up in that atmosphere. My wife, who grew up in the Soviet Union, got a few laughs but was largely unimpressed (except by Burt Reynolds). Younger viewers are also likely to just roll their eyes.
If you enjoyed it the first time give it another watch for, if nothing else, Jackie Gleason’s portrayal of Buford T. Justice.
Oh, and that Trans Am!
See all reviews
Back to top
Get to Know Us
Make Money with Us
Amazon Payment Products
Let Us Help You
EnglishChoose a language for shopping. United StatesChoose a country/region for shopping.
© 1996-2022, Amazon.com, Inc. or its affiliates