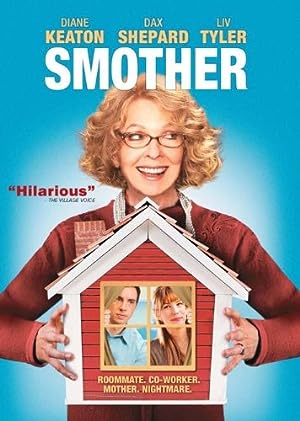 (124)
4.61 h 32 min2008PG-13
When Noah Cooper is fired from his job as a therapist, he thinks his day can't possibly get worse, but arriving home-- he discovers his overbearing mother Marilyn has moved in with her five dogs in tow!

RichReviewed in the United States on August 29, 2017
1.0 out of 5 stars
One of the worst movies I have ever seen
Verified purchase
I can't believe I actually bought this movie. I was sucked in by all the good actors involved. I can see why they named it Smother. Diane Keaton will drive you absolutely nuts in this movie! She goes a million miles an hour and goes nowhere in this movie except driving her son Noah (Dax Shepard) and you the viewer absolutely crazy because of all the crazy stuff she does. I don't recommend this movie to anybody unless you want to waste your money like I did.
4 people found this helpful

C. L. MortonReviewed in the United States on October 11, 2016
1.0 out of 5 stars
Another Stinker
Verified purchase
Although I've long been wary of any movie with Diane Keaton in it, I went ahead and rented this because of Dax Shepard. That was a mistake. We loved Shepard in the hit TV series, Parenthood. Unfortunately, he apparently only knows how to play the same character, and it didn't work in this pathetic excuse of a film. We were so disappointed in the utter lack of laughs that we shut it off a quarter of the way through.

As for Keaton, she's much better in straighter roles, e.g., opposite Michael Douglas in And So It Goes. She fails miserably in the I Love Lucy/Meg Ryan goofball schtick, instead just coming off as completely annoying..

MissPriss#1Reviewed in the United States on June 26, 2016
5.0 out of 5 stars
Really Good DK movie!!!
Verified purchase
What can I say about Diane Keaton... She is as wonderful today as she was in Annie Hall. She has not changed at all. Unlike some other actors of her generation, she will not compromise her reputation by making a terrible and totally disgusting and distasteful movie for the almighty dollar...
2 people found this helpful

JenniferReviewed in the United States on June 21, 2019
5.0 out of 5 stars
Nothing
Verified purchase
Loved it

Sheree RenselReviewed in the United States on December 27, 2016
1.0 out of 5 stars
Horrible, Annoying, do not waste your money.
Verified purchase
This movie is so horrible, I couldn't watch the entire thing. I LOVE Diane Keaton, but this part was not a good thing for her. The characters are so annoying, I was "SMOTHERED"! This is a terrible movie.

ArizonaReviewed in the United States on February 9, 2020
5.0 out of 5 stars
One of the best
Verified purchase
I love this movie!
See all reviews
Back to top
Get to Know Us
Make Money with Us
Amazon Payment Products
Let Us Help You
EnglishChoose a language for shopping. United StatesChoose a country/region for shopping.
© 1996-2021, Amazon.com, Inc. or its affiliates