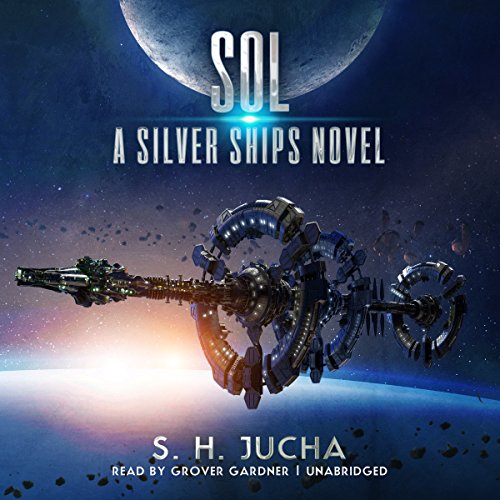 Sol's warships paid the ultimate price for threatening the Haraken and New Terran worlds. Now, Haraken president Alex Racine and his Méridien partner, Renée de Guirnon, are engaged in a desperate gamble to stop a war between their worlds and United Earth's (UE) massive forces before it starts.

What's Alex's grand plan? He hasn't a clue, but his people believe in him and hope he will find a way to protect them. Alex does have powerful assets: the Haraken space fleet; the genius SADEs, mobile Haraken digital intelligences; and the defected UE scientists, who are providing a wealth of intelligence about their home world.

Arriving at Sol, Alex discovers the perfect opportunity to make his statement to the UE Supreme Tribunal in the form of the aging Idona Station, which has fallen into disrepair as UE militia and rebels battle for control. Alex explains his unorthodox plan when he says, "The UE tribunes will succumb when we overpower them with prosperity."

The Harakens work to meld Idona's militia, stationers, and rebels into the Haraken's view of the world, one based on peace, purpose, and equality. The Tribunal is at odds over the Harakens' interference in their system, forcing the rifts in the UE's political structure to widen into chasms.

In the exciting conclusion to Haraken, the series' previous book, Sol is the story of a clash of cultures and ideals as Earthers struggle to find a way toward a successful new future.

G. Robert Grant
5.0 out of 5 stars Another exciting book
Reviewed in the United States 🇺🇸 on September 22, 2022
Verified Purchase
Some very cool unique ways to defeat a larger force in this book. Each book in the series adds new wonderful characters to the series’ universe. Definitely loved this one. I continue to love the fact that in general the bad guys introduced in a book are dispatched in that book or soon thereafter. I find it more entertaining to meet new adversaries in each new book.
Read more
One person found this helpful
Helpful
Report abuse

Guardsix
5.0 out of 5 stars The Best Series I've Read!
Reviewed in the United States 🇺🇸 on August 2, 2016
Verified Purchase
This has got to be one of, if not the best, science fiction series ever written! That probably doesn’t sound like much coming from me, but let me tell you, I don’t think you have ever had the opportunity to read such compassionate, thoughtful, and down-right beautiful stories book after book. If you haven’t read the first book in this series, “The Silver Ships, #1”, you must go back and start at the beginning. It starts there and continues exactly as it should through this book #5.

In book 5, Alex and his closes band of Harakens, set out to visit Earth’s solar system. They are doing so because Earth has already visited them in their system and the visit did not go well, especially for the “Earthers”. The Earther’s came as conquers with their armed to the teeth scout ship and then their gigantic battleship. They demanded the Méridiens become subservient to the government of Earth and were there to enforce this new rule. It did not go well for the Earthers when they came up against the Harakens led by Alex Racine. Their gigantic battleship was destroyed and the scout ship sent home. Knowing there was a possibility that the Earthers would return in force, Alex decided to visit Sol to see if he could bring some reason to these strange humans.

This book is not about battles and skirmishes. It almost all about how to win friends and influence your enemies. Sol, led by Earth is not in very good shape. There are constant struggles between the government militia and the rebels. Earths government has become greedy and is using an unjust judicial system to almost enslave their own population in order to get anything done. What Alex Racine and his Harakens do is simple take over a decrepit space station and turn it into the most profitable venture in the system. He does this by getting all the people on the station to stop hating each other and working together, not because they have to, but because they want to. And it works beautifully!

Now the Earth government and the Tribunal have a problem. How they solve this problem could mean the end of the small, but deadly group of Harakens. You’ll have to read what happens next. It’s typical Haraken with Alex Racine as their undisputed leader!

Now the best part. There is another book coming called, “Espero”. I cannot wait, but, I guess I’ll have to!
Read more
2 people found this helpful
Helpful
Report abuse

Underdog
3.0 out of 5 stars spelling and grammar errors, fundamental misunderstanding of basic science issues, and problems with the plot.
Reviewed in the United States 🇺🇸 on July 7, 2016
Verified Purchase
There are too many problems with this book for it to be truly enjoyable. Spelling and grammar errors occur too frequently. Words are sometimes missing from sentences. There are sometimes additional words in a sentence that don't make sense. That last issue generally reads like the author started to write a sentence one way but then changed his mind and decided to write it a different way in mid-sentence. A good editor should have corrected these problems. Sadly, the e-book version doesn't appear to have been edited.

There are also serious misunderstandings of basic science issues. For example, an admiral based around Saturn notes that it would take about twelve days to get a message to his superior on Mars and receive a response because Mars was on the opposite side of the Sun from Saturn. The twelve day figure is factually incorrect. Light travels at 186,000 miles per second. Radio waves travel at the speed of light. It is easy to look up the distances involved, do some simple arithmetic, and arrive at the correct answer. If an author is too lazy to do the math, he can easily look up the answer in many places on the Internet. If a radio message was sent in a straight line from Saturn to Mars at a time when the two planets were at their maximum distances from each other, it would take under four hours to get a message to Mars and receive a response. While it wouldn't be possible to send a straight line message to Mars if it was on the opposite side of the Sun, it would be a trivial matter for a space traveling culture as described in this book to place communications satellites in orbit around the Sun to relay messages. The use of a communications satellite would add minutes, not hours or days, onto the time necessary to communicate with somebody on Mars.

In another place in the book, some characters on a space station look at a holographic image of Saturn. A captain of a space traveling military ship speculates that the image must be about three days old since Saturn is then on a near pass to the space station. Again, this indicates a serious misunderstanding of speed of light limitations on communications devices. One way to put this in perspective is to consider how long it takes for light to travel from the Sun to Pluto. The average answer is five and a half hours. Surely it would take less time for a satellite in orbit around Sautrn to send an image of Saturn to a space station than five and a half hours when Saturn is on a near pass to the station. That's a heck of a lot less than three days. Officers in military space ships would be very aware of these issues and would not make this kind of mistake.

The combination of all of these issues make this a less than satisfactory book. The author should slow down a bit and spend more time getting these things right. He is clearly capable of producing a better book.
Read more
4 people found this helpful
Helpful
Report abuse
See all reviews

Tigs
5.0 out of 5 stars His best book yet!
Reviewed in the United Kingdom 🇬🇧 on July 10, 2016
Verified Purchase
The Silver Ships is a series that has a wonderful mix of action, intrigue and romance too. This particular novel shows how much Scott has progressed as a writer.
It had me gripped from the start to the end and I can't wait for the next book in the series. Well done Scott, First Class Sci-Fi !
Read more
Report abuse

TonyV
5.0 out of 5 stars I'm emigrating to Haraken...as soon as I finish book six
Reviewed in the United Kingdom 🇬🇧 on July 13, 2016
Verified Purchase
This is of course the fifth silver ships novel and I have read them all. Ser Jucha's style of writing is so absorbing as it brings to life the characters of Alex and Renee, the de Long twins, Tatia and many, many more. I couldn't begin to summarize the story as told over these five (soon to become six) novels. But I will say one thing. If you like a well told sci-fi story that will enrich your life - get book one, then book two...well, you get the gist yes? You won't regret it.
Read more
Report abuse

Ron Robson
4.0 out of 5 stars Another great book in a super series
Reviewed in the United Kingdom 🇬🇧 on July 17, 2018
Verified Purchase
I have so enjoyed this series. As it progresses it just gets better and better. The story and the action remains at a high level as does the intrigue. Recommended if you want a book you can't put down.
Read more
Report abuse

BarbicanBoy
4.0 out of 5 stars Good sci fi fantasy
Reviewed in the United Kingdom 🇬🇧 on July 28, 2016
Verified Purchase
My first read of this series, got more involving as it went on. I shall now probably read the earlier books.
Read more
Report abuse

Westhansford
5.0 out of 5 stars Another beautiful edition
Reviewed in the United Kingdom 🇬🇧 on July 18, 2016
Verified Purchase
I have been following this series from the beginning and admire the simple creativity of the author.
This collection of adventures are extraordinarily easy to follow and imagine in your own thoughts, congratulations and may you continue, for many additions to come.
Read more
Report abuse
See all reviews