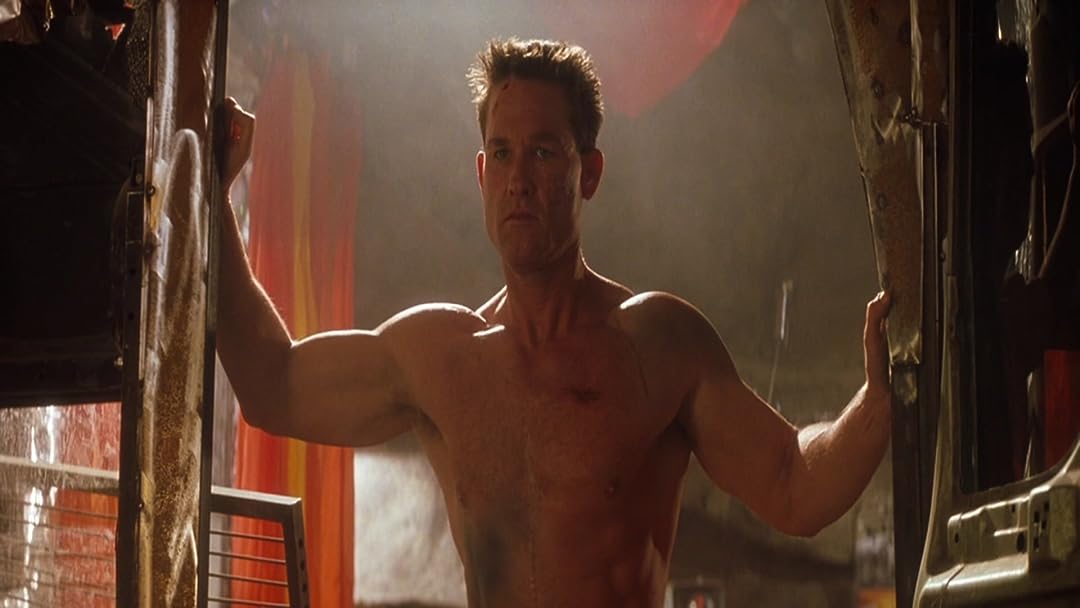 Th3G3ntl3manReviewed in the United States on January 14, 2021
5.0 out of 5 stars
THE Man Movie (Everyone Should See :)
Verified purchase
When I was a little squirt, it was the peak of my life when my dad would let me watch a "grown-up" movie. Man were those some great bonding times. This movie in particular my dad called a "man movie" and the label never left. It was the film he and I and my brother would watch whenever my sister and mom would have their own date nights. This movie tho<3333 So glad to have stumbled across it on blu-ray finally.

Regardless of being from 1998, this film rocks. Every bit of it fits the atmosphere and story it aimed to tell. And man alive does Kirt absolutely NAIL the role<333 If you like a good soldier movie of an "outdated" soldier one-upping 20+ super soldiers, this is it.

Warhawk1982xReviewed in the United States on November 5, 2019
5.0 out of 5 stars
My all-time favorite movie
Verified purchase
This movie is good in it's simplicity. What I mean is it doesn't have an overly convoluted story, it's a straight up action movie. I'll try not to spoil this 21 year old movie for those of you who haven't gotten around to seeing it. In my opinion, this is probably Kurt Russel's best performance. He doesn't have many lines and conveys much of his emotions through facial expressions. The supporting cast is also good. Sean Pertwee, Connie Neilsen, and Michael Chiklis all give good performances. Gary Busey and Jason Isaacs are great as Military officers with loose morals. Overall it's what a movie should be. An entertaining way to kill a couple of hours.
5 people found this helpful

joel wingReviewed in the United States on July 8, 2020
3.0 out of 5 stars
Robbed Kurt Russell of any personality in this film
Verified purchase
Soldier is a sci-fi dystopian story where the world has fallen into constant war. A society breeds soldiers from birth training them to have no mercy. It stars Kurt Russell as Sergeant Todd 3465. The government has come up with a new improved soldier however making 3465 obsolete. The story is about what he does afterward.

Soldier was a different kind of part for Russell. He was known for his fast talking in many of his movies during this period. Here he was almost mute as his soldier’s training didn’t allow him to talk except when spoken to. When he arrives with a group of settlers for example he largely stares at them. That removes one of the major draws of a Russell film. That means in the end, while Russell gets to prove he’s an action hero by single handedly taking on a slew of the new and improved soldiers he gets no personality at all with this character.
C

Isaiah DavisReviewed in the United States on June 7, 2019
5.0 out of 5 stars
Universal soldier meets platoon
Verified purchase
Great movie with a lot of action. Kurt was very good in this movie, such a good actor, but especially this role cause he hardly said a word which made it made even better role. You got everything going in this movie; action, love, science fiction, and a good story. It also has other actors that work good in the movie. One of Russell’s best and he has been in a lot of them.
3 people found this helpful

Jerry DerhamReviewed in the United States on May 30, 2015
5.0 out of 5 stars
Ask a Soldier returning from war about fitting back in
Verified purchase
Kurt Russell plays an engineered soldier who was born into and raised into military service. Years and years of training and wars on various planets and galaxies under his belt but now told he's obsolete.
Dumped and left for dead he survives with help from refugee families.
War has been declared but now he's taking it to them.
Trained to win by attrition at any cost he takes the fight back to the ones who called he obsolete.
A fantastic and believable performance by Russell. You are brought face to face with how hard fitting back in can be.
Well worth the watching.
17 people found this helpful

Betty L. WilkinsReviewed in the United States on December 13, 2012
5.0 out of 5 stars
Definitely worth a viewing......
Verified purchase
I was surprised that this movie was better than its title implied. Kurt has always been a very good actor, but it is easy to see that here he shines despite the very few lines he was given. The story itself was a surprise that it was not polished and it was a surprise to see that Todd, as a soldier did not make any smooth transition from his old life into a new one as easily as is too often portrayed in films. Todd, as a soldier, having known no other life was showing the stresses of what real soldiers have to deal with in such transitions when their training fails them in adapting to new situations. Alone, he could have survived, but amongst the refugees by whom he was befriended, he found it hard to live as he could not so readily adapt to their ways, so unlike his own, dredging up feelings long dormant and purposefully buried in his old life. However, when the action returned, one could see he burned with a new resolve as he returned to his old life to protect the people who took him in and to prove once and for all who was really "obsolete."
Busey was excellent as an old line officer who still had feelings for his men and Issacs was best as the one who viewed his new line soldiers as just commodities, machines to serve a purpose while placing himself above them.
While this was a science fiction setting, it could almost relate to almost any other time as well.
13 people found this helpful

spirithandReviewed in the United States on July 28, 2019
5.0 out of 5 stars
SOLDIER
Verified purchase
Kurt Russell plays a highly brainwashed soldier in this movie, but is being replaced by a newer breed of chemically enhanced soldiers, he fights his way out of imprisonment on a distant garbage planet to saving others and himself. Great thriller old movie seen it twice. Love it.
One person found this helpful
See all reviews
Back to top
Get to Know Us
Make Money with Us
Amazon Payment Products
Let Us Help You
EnglishChoose a language for shopping. United StatesChoose a country/region for shopping.
© 1996-2022, Amazon.com, Inc. or its affiliates