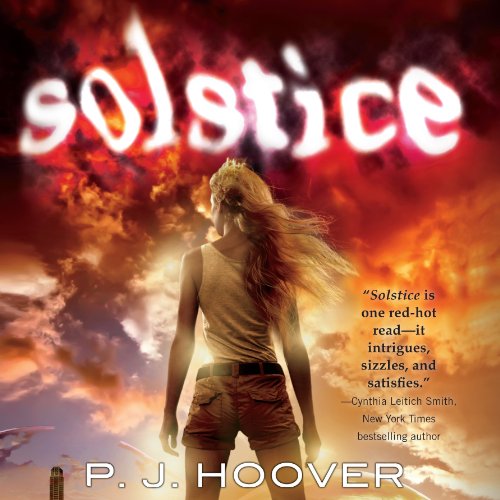 Piper’s world is dying. Each day brings hotter temperatures and heat bubbles which threaten to destroy the Earth. Amid this Global Heating Crisis, Piper lives under the oppressive rule of her mother, who suffocates her even more than the weather does. Everything changes on her eighteenth birthday, when her mother is called away on a mysterious errand and Piper seizes her first opportunity for freedom. Piper discovers a universe she never knew existed—a sphere of gods and monsters—and realizes that her world is not the only one in crisis. While gods battle for control of the Underworld, Piper’s life spirals out of control as she struggles to find the answer to the secret that has been kept from her since birth—her very identity….

An imaginative melding of mythology and dystopia, Solstice is the first YA novel by talented newcomer P. J. Hoover.

Solstice is one of those book that I love to hate! It was very hard for me to get into it, and once I (kinda) did, it was a BIG disappointment! Nothing really happened, besides global warming, which was intriguing, but I want something with a bang, or at least....Something! But as the story progressed and we get introduced to the Underworld, and the Gods, then I started to say, okay, this is going to be good after all. Sadly, that was not the case with Solstice.

Solstice had very interesting Ideas, but was not well thought-out. Now, I did not hate this book, BUT it didn't live up to my expectations at all! The writing was good, but everything was VERY predictable! I seen things coming way before they even happened, and when they did happen, it wasn't nothing to get excited about!

The world has gone into chaos. Global warning is in effect, with extreme heat rises, and unexpected hail storms. Its like the weather has a mind of its own...Many people have died as a result of this, and more are expected. Many even believe this is the end of times.

Piper, a freshly turned eighteen year old is struggling from her mothers obsessiveness to keep her sheltered, and cut off from everyone other then her best-friend Chole. She has never had a boyfriend or gone to hang out with friends. So when her mom has to go on this "mysterious" meeting, Piper seizes this opportunity to spread her freshly turn eighteen year old wings, and soars! She goes on a date! For the first time ever, and she loves it! But that's only the beginning of Piper's changing life.

Her life is thrown out of control when mysterious things start to happen. She's hearing and seeing things that can't really be there. And she hears whispers of someone oncoming demise. Then if that isn't enough, two mysterious boys come out of nowhere, and they both seem to know her, and want her. Then Pipers world turns upside down, when both boys turn out to be gods of this underworld, she never knew existed! She's also having these strong desires for both boys. One feels real and genuine, while the other desire feels forced, like a fuzzy haze. Piper can't understand or explain any of this, so she excepts it....

Then Piper is introduced to the Underworld were Gods rule, and dead souls linger. She is thrust into this life of pain, sorrow, misery, on one side of the underworld, where the bad souls go. And on the other side, happiness, love, and a life in paradise for the good souls.

Piper knows she is connected to this world somehow, someway, and she determined to find out how! But no one will tell her anything, and people are dying all around her, her moms hiding something and smothering her at the same time. She also has her best-friend Chole, starting to go crazy on her, and her estranged father is sending her letters and trying to take her away from her mom. And if that's not enough, One of the gods turn out to be something Piper never expected, and he's starting to stalk her! Pipers world went from crazy, to unbelievably INSANE, and she has absolutely no clue how, and why, But shes about to find out....

Now, doesn't that sound good? Well I thought so too, but really it is nothing like it sounds. When Piper found out that the guy she is falling for was actually and god in a different world, she wasn't even freaked out. she didn't ask the most obvious questions anyone would ask, and this go's for other things that happen. She made me feel like this: Okay, your a god in this mythology world, and you judge the dead souls that enter, but can you pass the wine, please? I mean come on, I would been freaking out demanding answers! But No, not Piper, she acts like its a everyday thing to met gods in the Underworld, and see Souls linger!

I also found the character development terrible! I did not like any of the characters, well maybe just a little, but not really. Its like they didn't have any personality, and I found myself not really caring what happened to them. And it was soooooo PREDICTABLE!!!! I knew what Piper was and her role in the whole Underworld thing when I was LESS then 25% in, and it isn't revealed until about 90%. So that should tell you right there that I did not get many surprises in this book!

Another thing that bothered me in this book was that their was really NO ACTION! If your looking for a fast-Paced book, that keeps you turning the pages faster then you can read them, then keep looking because you will NOT find it here, at least I didn't!

So Overall, I didn't hate this book, but I did not love it, or really even like it that much either. But I kept reading because I kept telling myself "It has to get better, One more chapter and it will" But Nope, it didn't. So would I read the next book? Probably not. Would I recommended this book? ABSOLUTELY NOT! But some people might find it worth the read, but just not me.
Read more
5 people found this helpful
Helpful
Report abuse

Amazon Customer
5.0 out of 5 stars Fantastic New Read from First Time Author
Reviewed in the United States on June 30, 2013
Verified Purchase
P.J. Hoover has blown me away. With a little bit of a frighteningly realistic dystopian world, added to Greek mythology, and a sprinkle of fantasy, Solstice was born, Ms. Hoover created a novel that is unique and unlike anything I've read before, and you know what? I loved every single second of it. I honestly had no idea where this book was going when I first started reading it, and there were so many twists and turns that Ms. Hoover leaves you guessing how the story will end. I found myself unable to put this novel down because I was craving answers, much like Piper, and I needed to find out what was going to happen. It is obvious that Ms. Hoover put a great deal of effort into crafting the mythical world that surrounded Austin, and it was simply brilliant. Ms. Hoover's writing was superb, and I never would have guessed this was her first novel. Ms. Hoover writes with a finesse that is characteristic of seasoned authors. The world is well explained and wonderfully developed, and I couldn't wait to find out more about this world that easily seemed like it could be our future.

Not only was the world crafted wonderfully, but the characters were too. I loved Piper, and her growth throughout the novel. While I initially didn't like the constant whining about her mom, later on in the story, that whining is completely justified. Not only was Piper a fantastic protagonist, but every other character was just as fantastic. Shayne was Hottie McHotster, smoldering, and I enjoyed all of his scenes with Piper. The one thing I loved about Shayne was that he let Piper set the pace of their relationship. In a way, he had to, but that didn't stop a certain other character *cough*Reese*cough*. Reese was aggressive and just plain creepy, which is exactly what Ms. Hoover wanted a reader to think. There was never any competition between the two, but I greatly enjoyed how Ms. Hoover wrote the vying of Piper's heart.

The other thing I enjoyed about this novel was how descriptive every single scene was. I honestly felt like I was right there with the characters, experiencing everything they were experiencing, and feeling everything they were feeling. This book was a thrill ride of action, adventure, and romance, and is sure to appeal to a wide variety of readers. I only have two complaints. First, the story was a little bit predictable, especially when you are as much of a fan of Greek mythology as I am. However, this didn't take away from the awesomeness of this book. And my second complaint is that this isn't a series!!! I want another book!

Overall, this is a great new read that will put P.J. Hoover on the map. I can't wait to read her next book :)
Read more
Helpful
Report abuse
See all reviews