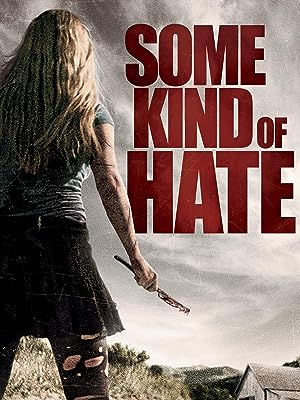 Some Kind of Hate

(84)
4.61 h 22 min201516+
A bullied teenager is sent to a reform school where he accidentally summons the spirit of a girl, herself a victim of bullying, who takes vengeance on his tormentors.

K. CurleyReviewed in the United States on April 30, 2018
3.0 out of 5 stars
Vengence From The Grave!
Verified purchase
Interesting film set against a backdrop of secrets in a desert compound for troubled teens - their last chance before facing jail for their violent actions. The blu-ray of ‘Some Kind of Hate’ is not really up to usual blu-ray standards but this seems to be problems with the way the film was originally shot. I understand that the night scenes are just that - shot at night. But many of these scenes seem to be LITERALLY ‘shot in the dark’. At times its nearly impossible to see what’s going on. That’s fine for the scare elements but gets annoying when it comes to plot points. Likewise is the dialogue in the movie - it has to be some of the most poorly-recorded sound of any film I’ve seen! This fact is not helped by the fact that the lead actor delivers most of his lines in a word-class mumble. I get he’s the ‘angry young man’ type but come on! My hearing is excellent yet I had to really crank the volume on this disc (which is unfortunate when the film suddenly explodes with sound!)

The film is edited rather arbitrarily, with sudden cuts which give the movie an overall jerky feel. There are some deleted scenes included as bonus content, but it seems like a whole lot more was cut from the final edit. It’s clear that the protagonist has a bad relationship with his father but we see little of it; and later on he explains it to Kaitlyn with a couple of throw-away lines. But it seems too little, too much of an afterthought. It seems as if the beginning was rushed and compressed to get him into the camp and into the main story as quick as possible. The other characters suffer for this too; we get no real information on these people or their back stories, which makes us care very little about them.

As for the actors they do seem into their roles. Ronen Rubinstein as Lincoln does a good job as a young man who was pushed beyond his limit into an explosive moment which landed him here. Grace Phipps shines (as Kaitlyn), but as I said her character like the others seems only sketched in. There are obviously many levels to her character but we don’t get to explore them much in the fast-paced editing. Sierra McCormick is delightfully twisted as the vengeful Moira (like Creepy Connie gone REALLY over the edge!) The way she kills is also unique, and gives this film a bit of a boost.

The ending was interesting, setting up a possible sequel that, since this was made back in 2015, probably won’t happen.

Overall, this is an decent film, although seemingly put together in a hurry with little money. The effects are decent, the cast interesting to watch. I didn’t hate ‘Some Kind of Hate’, just don’t expect anything epic or life changing from it.

M. TURNERReviewed in the United States on March 22, 2021
2.0 out of 5 stars
garden variety revenge/sympathy flick, a hackneyed yawn-fest
Verified purchase
Written sloppily. Edited just as sloppily. Looking every bit as cheap as the production budget. Gracie Gilliam was standout in the cast. She was the one who was able to act and come across through the writing, with Roman Rubinstein a not-terribly-close second, mainly because the movie's hero was so poorly written, not for any lack on the actor's part. And it's always good to see Noah Segan working. His part in this was secondary, and so he got off light. Aside from those three, next to nothing in this film works... or in some cases even makes any sense. As I wrote at the top, it's garden variety misunderstood teen revenge/sympathy and doesn't do *anything* at all original or even interesting. It got made, though, and folks got paychecks, which I can't fault in the economy we've been in for the last several years. Movie still kinda sucks. It was 1-star originally, but I added an additional star because of the work Gillam and Rubinstein. -- This movie is rated "Not R", for "Not Recommended".
One person found this helpful

HoppyRooReviewed in the United States on December 10, 2020
4.0 out of 5 stars
I'll go 4 stars...
Verified purchase
This probably warrants a 3 star rating, but given the $200k budget, I'm adding a bonus point...

The writing was a little amateurish, but I thought everything else was done fairly well... acting was above-par, audio was solid, camera work was fine ( although there were a few dark scenes ), special effects were surprisingly good...

I can't say this was particularly scary, but it was certainly suspenseful enough to keep my attention for the duration.

So, again, the movie itself is a little childish, and they don't really have anything "that" special or unique over other similar movies, but it was pretty well done, and probably one of the better flicks Prime has up now for free... 3 stars, rounded up to 4 for being low budget...

Russell SReviewed in the United States on June 20, 2017
5.0 out of 5 stars
Totally enjoyed this movie.
Verified purchase
Lincoln has always been the object of bullies. When he is sent to a remote school for troubled teens for finally striking back at a boy with a fork to the face the harassment starts all over again. A teenage girl named Moira who was driven to suicide by vicious bullying years ago haunts this place and when Lincoln accidentally summons her back, she goes on a rampage for him. I was shockingly surprised by how much I loved this low budget gem. Ronen Rubinstein as Lincoln, is excellent tons of pathos. He plays this kettle waiting to boil very well. I'm not sure who plays Moira, she is terrific as is the almost girlfriend of Lincoln's. I love most of the cast, there were a couple weak performances and a few silly scenes but overall I looked passed that and found a really cool movie. Since someone else said it, the way that Moira kills is GREAT!
2 people found this helpful

WicingasReviewed in the United States on October 11, 2018
4.0 out of 5 stars
Not bad
Verified purchase
This is a pretty standard avenging ghost story but it is well done. One thing I had not seen in other movies is that the ghost hurts others by hurting herself. A bit of a twisted twist. The actors did pretty well. All I will say negatively are two things: 1) for a reform school, supervision was virtually non-existent; and 2) the completely standard ending.
2 people found this helpful

Opin8d1Reviewed in the United States on January 26, 2021
3.0 out of 5 stars
Typical Revenge Movie
Verified purchase
It was pretty good for a typical revenge movie. Plot was an evil spirit comes back to get revenge for being bullied & causing suicide. If you like blood & gore, this is pretty good. Didn't care for musical score but feel it was worth the price.
One person found this helpful

stephany showersReviewed in the United States on May 21, 2020
2.0 out of 5 stars
it was ok.
Verified purchase
had a good story-but they totally messed it up. its a shame.
One person found this helpful

SarahReviewed in the United States on November 8, 2016
5.0 out of 5 stars
this is like some Voodoo stuff
Verified purchase
This girl is like any human voodoo doll she comes back and gets revenge on everybody when she cuts herself the other person gets cut and end up dying every time she lies herself the other person gets sliced up it is amazing this movie you have to watch it
2 people found this helpful
See all reviews
Back to top
Get to Know Us
Make Money with Us
Amazon Payment Products
Let Us Help You
EnglishChoose a language for shopping. United StatesChoose a country/region for shopping.
© 1996-2022, Amazon.com, Inc. or its affiliates